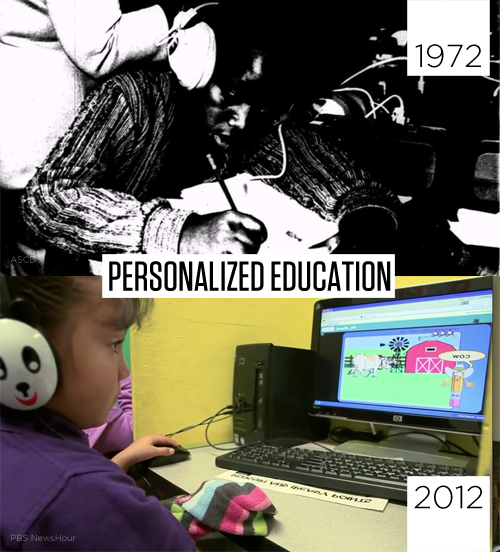 Here are five quotes, some of which are from edtech startups in 2012 while others are from an advertorial for “Individually Prescribed Instruction” published in ASCD in 1972. Can you tell them apart?

Educators and parents across the country seem to agree that a system of individualized instruction is much needed in our schools today. This has been evident to any parent who has raised more than one child and to every teacher who has stood in front of a class.

[This product] allows the teacher to monitor the child’s progress but more important it allows each child to monitor his own behavior in a particular subject.

The objectives of the system are to permit student mastery of instructional content at individual learning rates and ensure active student involvement in the learning process.

This is a step towards the superior classroom, because the system includes material that can be used independently, allowing each child to learn at his own rate and realize success.

Okay, they’re all from 1972, from a piece called “Do Schools Need IPI? Yes!” [pdf]. But really the only line that’s obviously out of the past is:

The aide’s most important functions is the scoring, recording, and filing of students’ test and skill sheets.

Computers now handle that scoring, recording, and filing. But in every other way, you could have ripped the text of that article from a Techcrunch article or New Schools prospectus.

I’m not merely snarking that what we think is new and great isn’t so new. I’m also saying it still isn’t great. Stanley Erlwanger wrote an incredible piece in 1973 illustrating how easy it was for a student named Benny to appear successful in IPI while actually knowing very little. Both in 1972 and in 2012, these systems ask questions that are trivial enough to be gamed. The only difference is that instead of writing questions to accommodate the limitations of a human-scorer, we’re now writing questions to accommodate the limitations of a machine-scorer.

If you’re in this industry, read those papers close enough that you can tell yourself, “I understand why IPI failed. This is how we’re different.” Basically, IPI is a free failure for you and your company. I hope you won’t pass it up.

BTW. Justin Reich points me to the opposing piece from the same ASCD issue:

While some persons see the IPI program as aimed in the direction of “humanness and openness,” I consider its implementation a step in the opposite direction for many schools. For more than 50 years, many recognized leaders in education have worked to move learning opportunities provided in our schools from “rigid, passive, rote, and narrow” to “open and humane.”

2013 Jan 12. Mike Caulfield again points out that personalized learning may have an isolating effect on students who really need to have their assumptions tested by their peers:

Benny, the student the study is about, has some odd ideas about mathematics, induced by peculiarities of the testing system. But he’ll never know they are odd because the individualized instruction makes discussion with peers impossible.

2013 Jan 13. Mary had a positive experience with IPI and highlights the efforts her teacher took to keep the program from isolating students with their misconceptions:

I was educated using IPI from K-4. IPI allowed me to work at my own pace, which tended to be faster than average in Math and about average in the reading. When I moved to a district that did not use it, I was devastated. I hated the non-IPI system and was bored and annoyed with math for the next three years. Since This was so devastating to me, I clung to my IPI materials and I still have some all these years later. I use them and my experiences to balance the discussion we have in my graduate class when we discuss the Benny Paper. You see, to me, IPI was not a failure, the way Benny’s teacher implemented it was. Teachers still had to teach when using IPI or of course it would be a failure. My experience with IPI was different in key ways than The Benny paper describes… the teachers would set up table groups each week based upon what book we were working on. Along with working independently through the workbook and tests, the students were required to discuss a question provided by the teacher and s/he would ask each group to stop and discuss it at a particular time so s/he could be there to listen in. In addition to this, after each unit test, we had a brief one-on-one meeting with the teacher to discuss the content, where according to my old handwriting, I was being asked targeted questions where I needed to explain my reasoning. In other words, my teachers did their own assessments and did not rely on bubble sheets. True the initial presentation of the material came through the workbook, and it’s true such a system would not engage all students all the time, but that’s where teachers come in. Teachers need to know their students. Teachers need flexibility day by day, student by student, to use or not use these tools. Allowing students to move through material at their own pace is still a good goal. Giving teachers tools to help them manage that is a good goal. Devising tools that remove teachers from the process is where we go wrong.

Better Best Squares & The Future Of Math Textbooks   Rocketshipâ€™s Learning Labs & The Cost Of Personalization, Ctd.
Unless otherwise noted, everything you and I post here is licensed
for reuse under Creative Commons Attribution 4.0 International.