I was in Australia this last week, working with some teachers at MYSA on You Pour, I Choose. It’s a task that asks which of two glasses has more soda and involves, among other skills, a fairly straightforward application of volume. 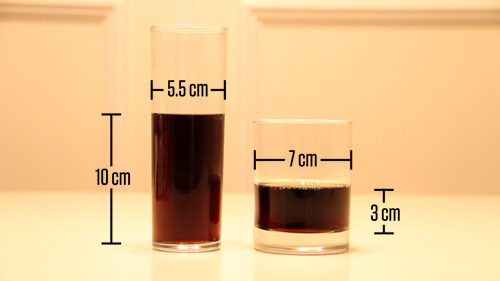 A teacher in the workshop called me over. “I’m not a math teacher,” she told me, and then pointed to the person next to her who had calculated the formula for volume of a cylinder.

This was a rather stunning suggestion, made all the more impressive by the fact that this woman doesn’t immerse herself in numbers and variables for a living like the rest of us.

I have two questions:

2013 May 29. I knew just telling her, “That’s wrong.” would be unsatisfying because, explicitly, she said, “Am I wrong?” but, implicitly, she was saying, “If I’m wrong, then make me believe it.” I knew the current problem wasn’t helping me out because her shortcut actually worked.

I knew this woman had dropped me off deep in the woods of “constructing and critiquing arguments” but I didn’t know yet what I was going to do about it.

“Whoa,” I said. “Does that work? If that works that’s going to save us a lot of time going forward. Let me bring your idea to the group and see what everybody thinks.”

In the meantime I stewed over a counterexample. It took me more than a minute to think of one because a) I was kind of adrenalized by the whole exchange, and b) I don’t do this on a daily basis anymore so my counterexample-finding muscle has become doughy and underused.

I posed her shortcut to the group and said, “What do you think? Does this work?” I gave them time to think and debate about it. Someone came back and said, “No, it doesn’t work. Imagine two cylinders with different heights and a radius of one.”

Awesome, right? This particular counterexample doesn’t disprove the rule. The square of one is also one so her rule works here also.

Final note: students are often asked to prove conjectures that are either a) totally obvious (“the sum of two even numbers is even” in high school) or b) totally abstract (“prove the slopes of two perpendicular lines are negative reciprocals” in middle school). It’s rare to find a conjecture that is both easily understood by the class and not obviously correct or incorrect. I’m filing this one away.

The Do You Know Blue Student Prizewinner   Great Lessons: Evan Weinberg’s “Do You Know Blue?”
Unless otherwise noted, everything you and I post here is licensed
for reuse under Creative Commons Attribution 4.0 International.