By Dan Meyer • September 21, 2013 • Comments Off on Great Classroom Action 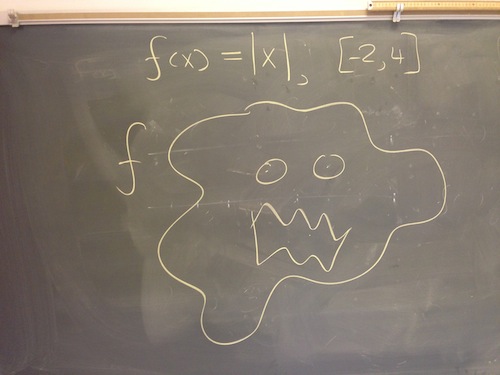 Cathy Yenca uses a number talk to draw out the distributive property:

In the middle of a lengthy and fun post describing his first day of school, Andrew Knauft asks his students which number in the set {9, 16, 25, 43} doesn’t belong and why:

Here was a student, on the first real day of class, evaluating an argument independently of her own person bias, without forgetting that bias! (She believed her reason, for a different number, was more convincing, so the argument she read, although good, wasn’t good enough to sway her off her choice.)

Also in the vein of constructing and critiquing arguments, Andrew Shauver asks which image-preimage reflection is “best” out of a set of imperfect reflections rather than which one is “right”:

That question opens up a lot of potential thought-trails to wander down. As I did this activity with students today, the class settled on three criteria for rating these reflection attempts. The first is that the image and pre-image should be congruent. The next thought was that the image and pre-image should be the same distance away from the line of reflection. Finally, the students thought that the segment connecting the image/pre-image pairs would should be just about perpendicular to the line of reflection.

About Dan Meyer
I'm Dan and this is my blog. I'm a former high school math teacher and current head of teaching at Desmos. He / him. More here.
[Makeover] Summary   Explore The Math/Twitter Blogosphere
Unless otherwise noted, everything you and I post here is licensed
for reuse under Creative Commons Attribution 4.0 International.