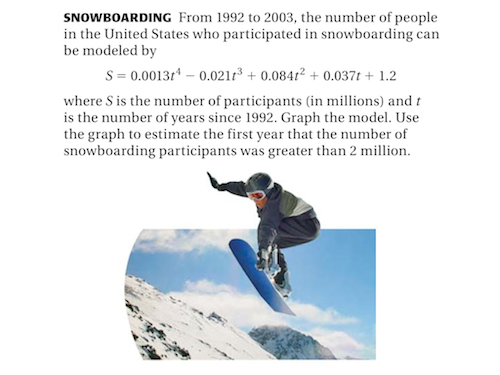 When I work with publishers, I find authors hesitant to tinker with the mechanics of a task and eager instead to spread the “real world” over the task like a thin coat of varnish.

Why are students bored by quartic equations in the problem I excerpted above? We are less eager to examine the structure of the task (which has been passed down and assumed constant for generations) and eager instead to just add stock photography of a snowboarder.

Similarly, when I find interesting real-world tasks that result in engaged, interested learners, the real world-ness of the task is often its least essential element.

What’s “real” to you isn’t necessarily “real” to me. Our lived experiences are different.

An example on the extremes: one of my favorite proof tasks is Bucky the Badger. Lots of teachers and students enjoy it. The context and the math are often interesting. But I took it to Australia two years ago and interest was quite a bit muted for reasons I should already have anticipated: they don’t do football like we do football.

This obstacle to effective curriculum design isn’t insurmountable. Lots of great art has been made about contexts we’ve never experienced, for instance. But we assume this obstacle doesn’t exist at the expense of our students who haven’t been privileged with our life experiences.

It’s self-limiting to try to draw lines between “real” and “fake.”

Take hexagons, health insurance, hydraulic engineering, hydrogen gas, and heptominoes. Is anybody here confident they can tell me which of these is “real” to a sixth grader? Which is “fake”?

This is a self-limiting question. They can all be made real.

We should be very, very hesitant to write off entire worlds as foreign and unknowable, especially the world of pure mathematics, which a student can always conjure up given nothing more than a mind, a pencil, and a piece of paper.

The point of math class.

The point of math class isn’t to build a student’s capacity to answer questions about the world outside the math classroom. It isn’t to prepare her to get a job either. Both of those are happy outcomes of a different goal that’s broader and more interesting to me.

The point of math class is to build a student’s capacity to puzzle and unpuzzle herself — no matter what form those puzzles take.

Find those puzzles in the real world, the fake world, the job world, or any other world —Â it doesn’t matter.

[Fake World] Math Needs A Better Product, Not More Commercials   Real-World Math That Isn’t Real To Students
Unless otherwise noted, everything you and I post here is licensed
for reuse under Creative Commons Attribution 4.0 International.