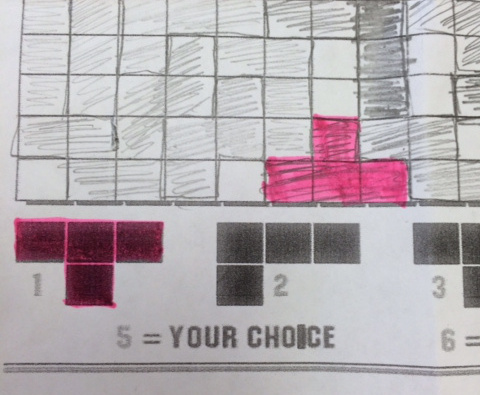 One table debated the transformation highlighted in todayâ€™s picture. Is the figure on the grid a reflection of the figure or a rotation?

Federico Chialvo asks his students “How safe is a Tesla?”

Jonathan Claydon poses the deceptively simple challenge to spin a measuring tape handle at exactly one mile per hour:

Most students experience miles per hour in a car. The challenge would imply “I should spin pretty slow.” Yet, the handle isn’t very long. And there’s the curiosity. What does 1 mph look like at this small scale? So they spun.

Mary Bourassa repurposes a classic party game for the sake of learning features of quadratic equations:

They would ask “Is my h value positive?” but then either interpret the answer incorrectly or not be sure whether the person they had asked truly understood what a positive h value meant. They all figured out their equations and had fun doing so. And they want to play again next week when the whole class is there. I’ll be happy to oblige.

Youâ€™ve seen the tasks. Youâ€™ve read the research. Youâ€™re basically bought in. But how do you begin?

Almost shockingly free of buzzwords, platitudes, soft descriptions, or anything close to moralizing. Bookmark it and send it around.

Related: Geoff Krall Combs The Internet For Lesson Plans So You Donâ€™t Have To 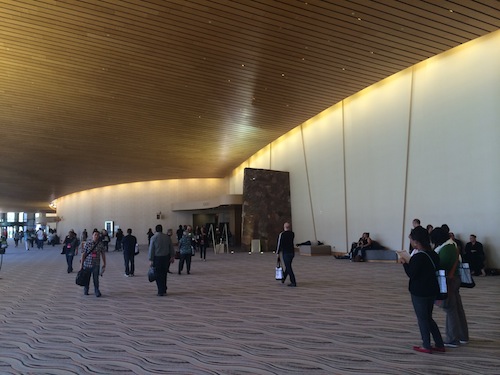 I’m just now back from CMC South in Palm Springs where attendance was about 1,000 people higher than the organizers expected. My already-pretty-high expectations for California math education conferences were also exceeded several times over. What follows are resources and takeaways from the sessions I attended and from one I didn’t.

Robert showed us this image and asked us to figure out how much it cost. 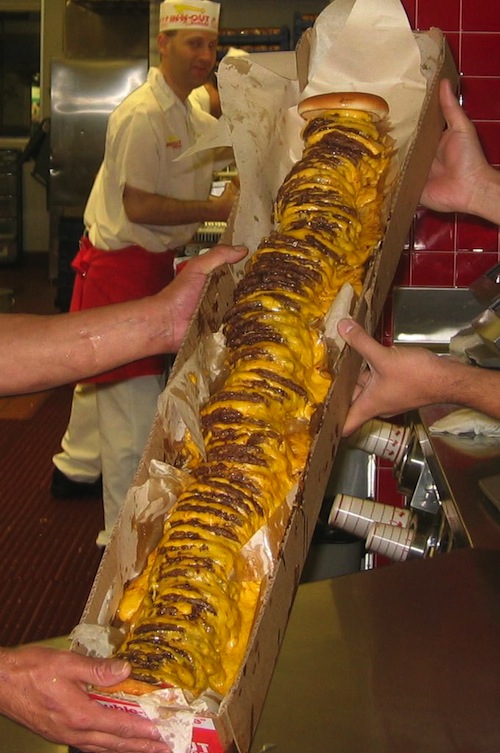 I’ve seen his lesson plan before but it didn’t prepare me for how interesting the math became.

We used the In-N-Out prices for a hamburger, a cheeseburger (a hamburger + cheese), and a Double-Double (a cheeseburger twice over) to figure out the cost of the 100×100 burger.

Our calculation was exactly right but we arrived at it differently. I used a system of three linear equations. My seatmates used a bit more conceptual creativity and got the same answer with a lot less computation. Robert highlighted all of these methods.

My takeaway: it’s really, really hard to describe in a text-based lesson plan all the awesome, heady moments it may provoke. I knew the lesson would be fun and productive. I didn’t know it would be this fun and productive. How do we create lesson plans that convey all those highs, rather than just the nuts and bolts of their implementation?

Bree claimed that stories are a useful medium for student learning. She backed this up with lots of citations that I hope she’ll share somewhere. [Update: She has.] She posed ideas for filtering our own lessons through the logic of stories â€“ setting context, adding conflicts, etc. She closed by asking us try to create story-based lessons for exponentials and fraction division.

My thoughts went to St. Matthew Island, which I’ll link without elaboration.

Manipulatives vs. Technology: Bring Your Bias and an Open Mind

Great premise for a session:

Allan then brought any resource you’d want, from low-tech to high-tech, everything from tracing paper and scissors to a class set of TI-Nspire’s. We used what we wanted to explore those objectives and then debated the merits of the analog and digital technologies.

The debate hit a high register pretty quickly. For the 180 degrees question, people tended to favor the diverse ways you could demonstrate it with paper. (Cutting, tracing, drawing, etc.) With the NSpire, you had one. You downloaded an applet from Allan and moved vertices around, watching the angle sum stay constant.

For the shortest path problem, most people preferred the calculator because you were able to set up the constraints and then drag a point around to see where the distance bottomed out. The only analog method we discussed was to draw the scenario and then use string to measure the different possibilities, slowly narrowing in on the answer.

For my part, I was bothered that we never discussed a) any other digital technology, aside from Texas Instruments calculators, or b) the cost of a class set of any kind of technology.

Granted, I probably make sport of Texas Instruments too much (and I’m hardly unbiased here) but truly I just find the user experience miserable. From the untouchable, low-DPI screens, to the time it takes me to find the right button out of the millions, to the mindless, button-pushing worksheets teachers have to pass out just to make the devices comprehensible, to the lurching way the cursor moves across the screen in Cabri, I find the whole experience pretty painful.

It would have been great to see the same problems approached with Geogebra or Desmos, for instance. Or even an Excel spreadsheet.

Then there’s the cost. All other things held equal, the high-tech solution will still cost thousands of dollars more per classroom. So we shouldn’t be talking about which solution comes out barely ahead of the other. Technology should shoulder the greater burden of proof here.

Five interesting investigations with polygons [pdf]. Michael spent ten minutes prefacing the set, then let us investigate them for twenty minutes, and then asked a volunteer to debrief each one at the end.

If nothing else, it was a nice morning moment to talk about math with Internet friends. That was enough. But I’ve been struck also by how hard it is to make a given math concept more challenging for students and more interesting at the same time. We use bigger numbers. We mix in fractions and decimals. We lengthen the problem set. We time it.

For instance, once students understand how to find the sum of the interior angles of a polygon, it’s like, what do you do to make this more challenging and more interesting?

Finding the interior angle sum of a donut polygon makes the original task more challenging and more interesting at the same time. In particular, it has a great stinger at the end when you find out whether or not a triangle inside of a pentagon has the same angle sum as a pentagon inside of a triangle. 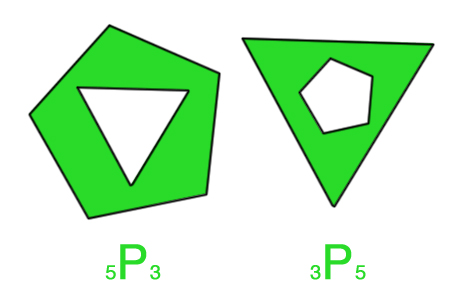 Michael had two questions at the end that asked, basically, “Do your conclusions hold if there’s a dent in the polygon?” Then, “What about two dents in the polygon?” This messed me up a little bit, because, no, it shouldn’t matter, but then why would Serra include the two questions? Basically, Serra had your correspondent feeling briefly but completely off balance. 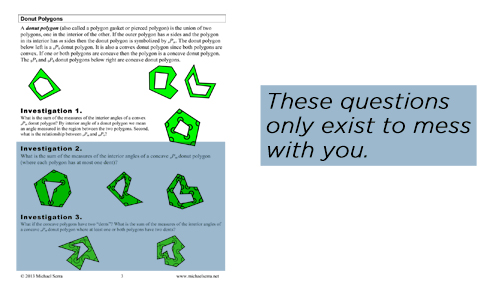 The absolute value was a pleasant surprise. Now I have ammunition when a student says, â€œWhen am I ever going to use absolute value?â€ â€œWell, when calculating the interior angles of a n-sided star polygon, of course.â€ ;)

Avery wins the prize for Best Session Description by sneaking in the totally droll line, “All hail CCSSM MP3.”

He briefly dinged two-column proofs, the Disaster Island where we usually sequester conjecture and argument. I’m all for broading and deepening the definition of proof but I think Avery stretched it too far to include skills like estimation and asking us to justify our answers to the Locker Problem. Is “justify your answer” any different than “prove your conjecture”? 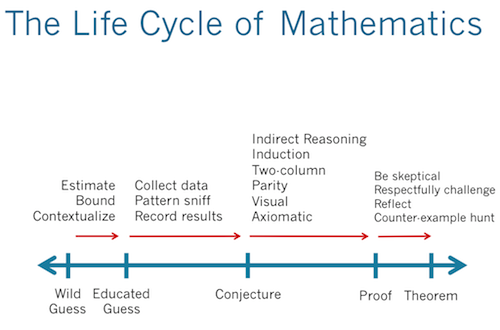 Later, he got into territory I found challenging and really well-thought-out. He showed how simple puzzles like Shikaku could be used to introduce the difference between axioms and theorems. He showed a Shikaku puzzle and its answer (below) and asked us, “What are the rules here?” 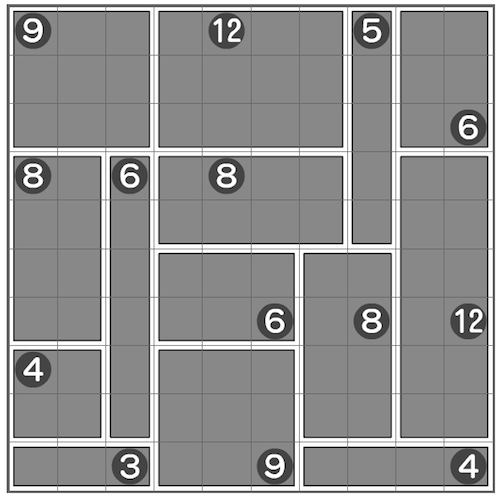 “The numbers define the area of a rectangle” and “the side lengths of those rectangles are integers” are axioms, without which the game wouldn’t make any sense. Theorems are the consequences of the axioms, like “Prime-numbered areas result in long, skinny rectangles with side-length 1.”

He also used a variation on the old game Mastermind to create a class-wide context for conjecturing, contradicting, and proving. Great stuff. Wish you were here.

I didn’t actually attend Brent’s session, but he explained it to me in the coffee shop and I wished I had. Basically, you give your kids a number line with 0 and 1 marked off. What other numbers can they construct with a compass and a straightedge?

The other integers fall pretty quickly. A lot of irrational numbers fall when students learn the Pythagorean theorem. Trisecting an angle is impossible but trisecting a line is possible using similarity and the properties of parallel lines and the constructions are varied enough to be interesting.

This seemed like a task that could extend through a good stretch of a Geometry course, drawing in lots of conjecture and proof along with some good review of numbers and operations.

The odd thing: I found Brent’s personal description totally engrossing. But this is a really tough idea to sell in a 500-character workshop description.

Takeaway: I probably skip over loads of really interesting, but hard-to-describe sessions at conferences.

I’ll be giving this talk a few more times and then posting video here. I cited these resources. People were real nice to stop by even though it was the last session on a very pretty day. Thanks for the hospitality, everybody.