Three Stories About The Same Thing

Apple’s count-up to 25 billion apps struck the same chord for several of us last week. Three of us tried to represent that moment for students with photos and video. I don’t find the question, “Who did a better or worse job?” as interesting as “What were the principles that organized each of our work?”

Sean has a timer rolling in the foreground. Dan has superimposed his computer’s clock over the counter. Those design choices interest me. When he first saw the counter, I’m wagering Dan didn’t have his clock open. I’m positive Sean added that timer later in AfterEffects. What were they trying to accomplish with those additions?

A guess? They were trying to make the problem solvable, which is probably the most natural inclination for a math teacher designing a task for a math class.

I want to be explicit about my M.O. here without calling it better or worse than theirs. I’m still trying to figure this out.

The first point argues for a recording of the screen just the way it was when I first found the counter. Nothing extra.

The second point argues for postponing – not eliminating – a) data samples, b) a table, c) graphing paper, d) the slope formula, e) a lecture about the point-slope form of a line, etc., until after we’ve settled on a perplexing question that needs those tools, resources, and information.

This is a more accurate representation of how I solved the problem. (I had to decide that a table and a graph would be helpful. I had to decide that a linear equation would be the best model. No one gave me any of that.) It’s also more perplexing to see a problem as it exists in the wild, “posed simply and innocently, not flayed alive by terminology, labels, and notation.”

I’ve created two visual prompts for the same question, “How many gumballs are in the machine?” (This picture is from Dan Anderson, also.) One version abstracts the problem at the same time that it tries to perplex students. The other postpones that abstraction for just one moment. Both will result in (more or less) the same mathematical analysis. I’m curious which one would perplex students more. 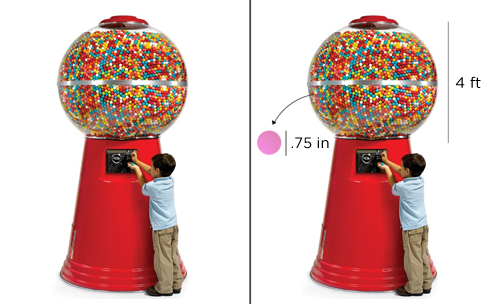 It would be nice to have a website to test out the difference a little more empirically.

I had kids staring at the screen with their iPhones out waiting to download at the beginning of class. It was hilarious. One of the most engaging problems we’ve done all year!

Expect To See A Lot More Of This   The Jungle
Unless otherwise noted, everything you and I post here is licensed
for reuse under Creative Commons Attribution 4.0 International.