Panel Remarks: Why Algebra Matters And How Technology Can Help 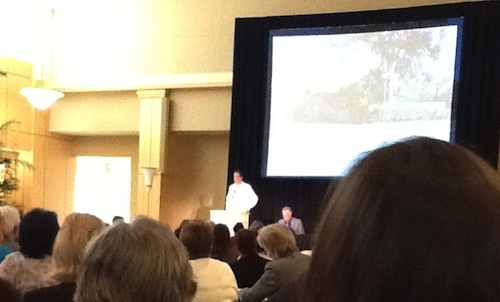 I was a panelist at Middle Grades Math: Why Algebra Matters and How Technology Can Help, a conference at Stanford co-sponsored by Policy Analysis for California Education, NewSchools Venture Fund and Silicon Valley Education Fund. (I know. Awkward, right.)

The following are my introductory remarks and responses to two questions. I could ask you how tall do you think that lamppost is. Just give a guess. I could ask you for a guess you know is too low. Too high. A wrong answer, if you will. I could then ask you what triangles do you see on this image now. How many? What types? Where are they? And once you point out certain triangles that you see, I could ask you, “Do you notice anything special about those triangles? Are they just arbitrary, random triangles drawn here or there?”

“No, there’s something special about them,” you tell me. “They’re mathematically similar-looking.”

And I could ask you, “How do you know that? Could you help me prove that?” And we know that if you have two angles that are the same in two different triangles, they are mathematically similar. “What two angles in each of those triangles are the same? Can you help me with that?” And you might point out to me that all of these angles are the same. In fact they’re all ninety degrees. Because, you tell me, we’re all standing perpendicular to the ground. Even the lamppost is. You could point out that these angles are the same.

“Because the sun’s rays all strike us at the same angle because we’re all in more or less in the same spot.”

So we have these similar triangles. And I could ask you, “What parts of these triangles are easier to measure than others?”

And we could have that conversation. You might point out that our heights are all known, except the lamppost’s. And our shadows are all fairly easily measured. And at this point, you could solve for that unknown height.

We’ve just gone from the concrete – –Â to the very, very abstract. – you and me – in this process called mathematical abstraction where we formalize the informal. It’s a process that is invaluable to our students, something that mathematicians do all the time. It’s engaging to students and it’s accessible to students at every level.

If I could think of one way to restrict access to math to the already-haves and close it off from the have-nots, I could do no better than to rush as quickly as possible to the highest level of abstraction as possible on this scene. And that’s, of course, how we see this problem in even highly regarded textbooks. Like right here. I can’t ask you, “What triangles do you see?” Those triangles have already been abstracted.

I can’t ask you, “What information is easiest to gather here?” It’s already there.

The problem, as I perceive it, is print. The process that we went through, stepping that out gradually, required ten extra slides in a slidedeck. That cost me a few bits and bytes on a hard drive. It’s nothing. But ten extra printed pages in a textbook. That’s very expensive. So I’m here today very optimistic about digital curricula and its ability to open that process of abstraction up to all of our students. So I just want to point out here, to close it up and turn it over to you guys, that print is a medium. Same as digital photos. Same as a teacher’s voice. Same as a YouTube video. Same as a podcast. These are all different media. And as we know, the medium is the message. The medium defines and constrains and sometimes distorts the message. The math that can be conveyed in a YouTube video is not the same math that can be conveyed in a digital photo or a podcast or a print textbook.

We’re so enthusiastic here in the Silicon Valley and in this group about technology that disrupts and scales but I think it’s really important to point out here the fundamental misapprehension of this whole process of technology that we have is that there is one monolithic “mathematics” and we are all just innovating around “mathematics.” But those innovations distort what mathematics is. That’s the ball that I urge us all to keep our eye on today. I’m really excited to be here and tease apart those issues with you and take some questions. Thank you.

How will the Common Core Standards paired with the computer assisted adaptive assessments that are envisioned by the Smarter Balanced Consortia change or disrupt middle grades mathematics?

Yeah, I like the Smarter Balanced assessment items, particularly their printed items. And that’s kind of controversial to say, I guess, at a tech conference. But the stuff you can assess online is just different. Someone I admire says, “the computer is not the natural medium for mathematics.” Not yet. There’s no natural language processing. You can’t easily grade automatically and adapt to a written argument the student makes about some figures he says are similar, for instance. So that’s stuff that I would feel sad to lose in our hurry to get to computer adaptive testing.

What kind of support are teachers and schools going to need to transition to Common Core, to make the changes in middle school math? Should the state be providing some support? Should county offices or foundations be providing that support?

Most of the PD that I underwent as a teacher stayed very close to content. It was one or two degrees from how you teach content and, now that we have these practices in the Common Core, that opens up an entirely new PD challenge. The most effective PD I’ve facilitated – and I’ve facilitated some very ineffective PD, I’ll admit that –Â the effective stuff has always included a large component where we do the practices. Because I think if you’ve taught for thirty years under a particular style of teaching, it has to distort what your perception is of math and how it should be taught. It’s unavoidable, to be steeped in that for so long. So to realign yourself, I imagine, is a very difficult thing. So PD that involves problem solving, involves reasoning, argumentation, that’ll be essential going forward.

[3ACTS] Joulies   What Silicon Valley Gets Wrong About Math Education Again And Again
Unless otherwise noted, everything you and I post here is licensed
for reuse under Creative Commons Attribution 4.0 International.