Watch Students Watch The Answer To Their Math Problem

Sadie Estrella’s class worked on Pixel Pattern and then watched the answer.

I’ll try not to be ideological here about photos and videos in modeling tasks. If you have another way to achieve the same cathartic reaction we find 38 seconds into the video, drop me a note in the comments. I’ll take it.

I’ve been working on this series for the last two months. I asked four of the most active contributors on 101questions (Andrew Stadel, Chris Robinson, Timon Piccini, and Nathan Kraft — all dudes, sorry about that) to:

I love these problems, but they scare the hell out of me.

You have the #3act hallmarks: a short visual setup, minimal language demand, and a question that can be approached intuitively at first. Have your students write down a gut-level ranking of each contestant. Who drew the best square?

We’ll eventually give them all the information they could want — area, perimeter, angles, side lengths, and coordinates (so they can get whatever we missed). The point is, we could very easily hint our way towards an answer by providing the area and the perimeter in advance, but now the student’s task is much harder and much more interesting.

Also, your task is much harder and much more interesting. You have to take whatever rule your groups of students come up with and parry back with cases — large, small, degenerate, etc. — that heat that rule to the melting point.

If the student says, “Let’s subtract each side from the mean side length. All the sides should be congruent,” you offer her a tilted rhombus, which scores perfectly against that rule but shouldn’t.

If the student says, “Let’s subtract each angle from the mean angle measure. All of them should be 90°,” you offer her a short, wide rectangle, which scores perfectly against that rule but shouldn’t.

These problems terrify me because even as I put an answer in the teacher’s guide [pdf], I’m not convinced it’s the best answer. (Should we give the bigger squares more credit because they’re tougher, for instance?) I only know the process is worth the terror.

BTW. This activity owes a debt to The Eyeballing Game and to Patrick Honner’s question, “Which triangle is more equilateral?” where you can find him parrying superbly in the comments.

Why should it be “our task” (teachers?) to take the students’ rule and parry back bad cases? This is one of the most interesting roles a student can take in this process. I’d much rather have the students coming up with edge cases against their own, or ideally others’, rules. I’d keep a few in my back pocket just in case, but students can drive that conversation in great ways.

“Draw two points and then the point exactly between them.”

Sorry to be nit-picky, but while the above task certainly meets the requirement for “minimal language demand,” I think ONE MORE WORD is required for the sake of precision: “halfway.” There is not a unique point that is “exactly between” two given points; there are many. But there is one point that is “exactly halfway between them.”

I know that “conciseness” and “precision” sometimes compete with one another, and I confess that I often strike the balance poorly.

Harder Than You Think

So using the devices for something that I would like to take 5 minutes usually takes 15-20, with the associated distractions of attention and loss of momentum. It seems like with all the preparation in the world, I can’t get these interludes to take less than 15 minutes, and I can’t ever, hardly ever, get it so every single student can participate. And mind you, I am not a noob at this stuff. At the risk of sounding hubristic, I’m probably one of the more experienced classroom-tech-deploying teachers you are likely to meet. And everytime I’m like, “Oooh, we need a device for this part,” I’m also like, “Crap. Is there any way I can avoid this?”

This is a huge problem and if you’re a technology coordinator, this is your huge problem.

The difficulty of setting up and configuring these devices for a teacher’s own, personal learning is dwarfed by the difficulty of doing the same at classroom scale. It’s so difficult that highly competent educators like Kate would rather find another solution. That’s before you even look at the bottom 99% of computer-using educators.

At the very least, I hope anecdotes like Kate’s will put to rest specious comparisons to cash registers for grocers, CAD software for architects, and Bloomberg terminals for stock analysts. They aren’t even in the same universe of access and usability.

I’ve been basically leaning toward tools which can either be installed on every kids computer easily, or which get shared via a link. Nothing else. The time from sharing the tool to using the tool is minimal in both cases, which helps reduce associated problems with task transfer.

Here follows an example of one of the problems with classroom tech. I am the guy in my school that is supposed to make the tech work. We purchased 60 iPads (not my idea). The administrator had planned that the teaching strategy would involve an app called AirServer which allowed iPads to project through a PC. AirServer was very non-cooperative so of course the usage plan took a digger. The teachers would not make teaching plans with tech that was not reliable. I now have a lot of unused iPads. Proper field testing would have solved a lot of time and money. But iPads in education are the cool thing so away we went. No testing, no significant teacher training and no curriculum writing or planning. From my reading this scenario does not appear to be uncommon.

It is my huge problem.

GraphingStories.com Is Open For All Your Graphing Story Needs 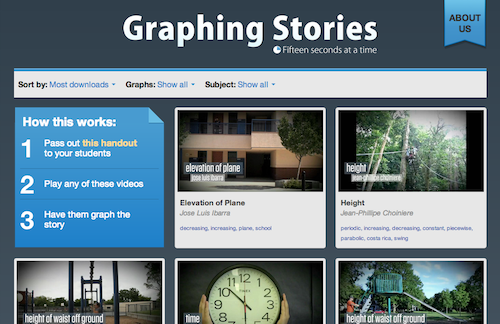 Five years ago I released a collection of 10 fifteen-second videos that helped orient my students to abstract and graphical representations.

@ddmeyer Kids went nuts over GRAPHING STORIES. Gets 'em every time. Thanks again for making and sharing these!!!!!

Last year I asked you guys to submit your own graphs and stories which I edited together by hand.

Today, in a joint collaboration with the BuzzMath team, we’re releasing 24 of those videos for immediate download and use in your classrooms, all tagged by content and math. (ie. “a step function about ponies”)

You guys were way more creative than I had anticipated:

Call for Submissions (Sort Of)

I’m never gonna do what I did a year ago ever again. Editing all those videos by hand took months of my time and probably a year off my life. But I would like to know what holes you see in this library and what we can do to plug them.

BTW. Be sure to drop a tweet @BuzzMath thanking them for their killer work here.

We know there are important steps [pdf] you can take to ready students for an explanation of key concepts. Riley Lark is helping you do several of them very easily with his open source ActivePrompt project. While Dave Major and I continue to bat around very specific implementations of digital curricula, Riley has created an extremely open framework, useful for all kinds of purposes.

This is everything: the student sees an image and has to place a red dot somewhere on top of it according to instructions given by the teacher. It sounds too simple to be of any use.

Drag the red dot to where you put the cafeteria so that it’s the same distance from each school. 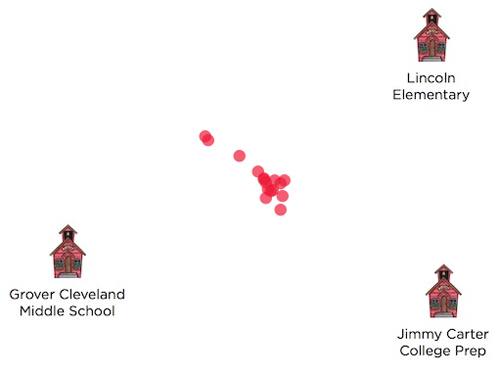 Drag the red dot to where line m will intersect line n. 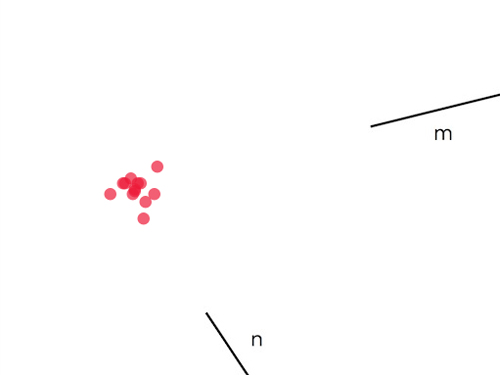 You see where this goes, right? Even with the second prompt, which isn’t explicitly “real world” in the sense that we usually mean it, students now have experience with the context, which makes it real to them.

Then we start to abstract it and help students work with these concepts: 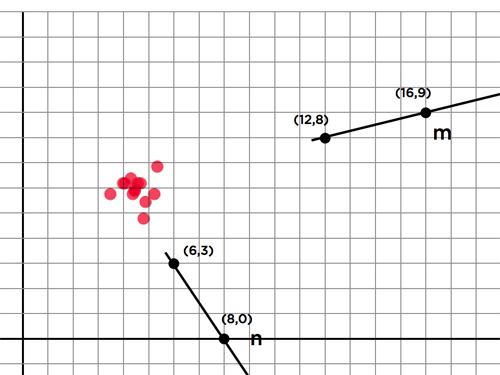 These brief experiences help immensely to set up and motivate the explanation that follows. It would be great (note to Riley) if the teacher could establish the correct answer at the end of the task (a teacher dot) which would then inform the students how close their guesses came. Also: student names on mouseover, mobile compatibility, vertical lines, and horizontal lines.

You can play with it immediately on Heroku. Be sure to link up your creations in the comments so we can all play along.

BTW. My hope in sharing Dave Major’s work and Riley Lark’s ActivePrompt and my own experiments is that you will become agitated and unhappy with whatever curriculum you are currently using, and that you will express that agitation and unhappiness to the people who publish and sell you that curriculum. None of us are anywhere close to nailing the question, “What do you do on day [x] with concept [y]?” for the entire set of x and y. But before we answer that question, we need to define the modern digital textbook. So here’s my pullquote definition, heavily informed by Dave and Riley’s work:

Riley Lark’s red dot is one of those experiences.

2012 Nov 29. Riley Lark takes you behind the scenes and shows off several creative ActivePrompts.

2012 Dec 4. Learning Catalytics (a for-profit product) seems to have done a lot of good work in this area already.