or: Titles Guaranteed to Murder Your PageRank

As I mentioned previously, I find the verb “abstract” way more interesting than the adjective “abstract.” The adjective is often used critically and defensively (“Ugh. Algebra. Too abstract.”) whereas the verb represents a milestone in human cognitive development and a skill that grows more and more precious in the modern workforce. How many skills have a shelf life of thousands of years? (A: Not typesetting.)

So let’s define the verb:

Abstraction is a process or result of generalization, removal of properties, or distancing of ideas from objects.

To take away; remove.

Let’s stipulate, then, that abstraction requires a context and a question. 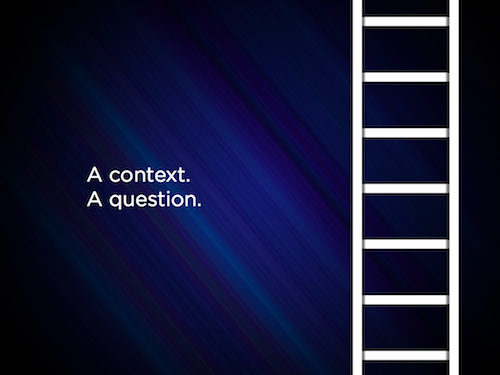 Then you’re on the ladder. As you go up the ladder you turn the context into something that excludes the noisy richness of the context but which is much more useful for answering your question. As I looked at all the times my students have abstracted in math class, I saw that the tasks and questions we confront and their order look a lot like this: 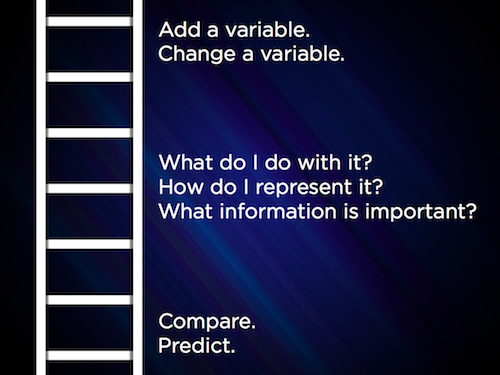 We debate the context on the level of experience and intuition. We make predictions. We compare different examples of the context until we understand which of its aspects are common and consequential to our question and which aren’t. We give those aspects names. We decide how to represent them. We decide what to do with those representations. And then we abstract other things in the same context.

If my mind were “light and deft and beautiful” as a monkey in a tree, I’d stop abstracting abstraction here, step down a few rungs on the ladder, and concretize this abstraction of the process of abstraction with an example. That’s next.

This issue has been with us, of course, forever: the general question of ab-straction, as separating what we want from what we are presented with. It is neatly packaged in the Greek verb aphairein, as interpreted by Aristotle in the later books of the Metaphysics to mean simply separation: if it is whiteness we want to think about, we must somehow separate it from white horse, white house, white hose, and all the other white things that it invariably must come along with, in order for us to experience it at all.

[LOA] Concretizing Abstraction   [LOA] The Place Where Language And Math Make Friends
Unless otherwise noted, everything you and I post here is licensed
for reuse under Creative Commons Attribution 4.0 International.