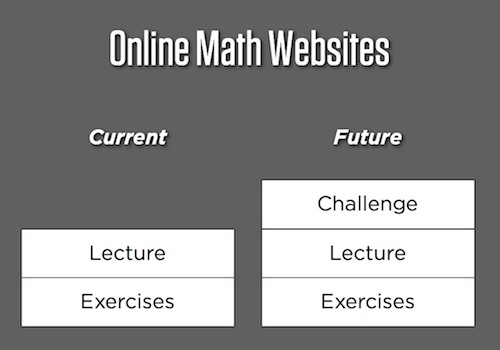 For several different reasons, online math websites should add an introductory challenge that activates a student’s intuition and intellectual need. The video lecture should then be directed at satisfying that particular intellectual need.

Online math sites are quickly defining math down to a) watching lecture videos and b) completing machine-scored exercises. I’m not going to re-litigate whether or not that definition of mathematics is as good as what we find in the best classrooms in the highest-performing countries. (It isn’t.) Instead, I’m going to take this online model for granted and ask how we can make it better.

What should we improve? It isn’t the lectures.

For some time there, I was meeting with founders who were pitching their startups as “Khan Academy plus [x]” where x was anything from better graphics, better lesson scripting, a face on the screen, or multiple choice questions embedded in the video. (Here’s basically the entire set of [x] at once.) I don’t believe there’s much value to add there. The Mathalicious lecture videos are beautifully shot. TED-Ed pairs their lecturers with world-class animators. Woodie Flowers wants to see Katy Perry and Morgan Freeman narrate these videos (I think he’s at least half serious) and my suspicion is that we have reached a point of diminishing returns on the efficacy of lecture videos. Once we passed a certain point of coherence and clarity, watching Drake rap over a combinatorics lecture animated by the Pixar team just isn’t adding a helluva lot. If math were only about clear and coherent lectures, we could probably close up shop here in 2012. Thankfully, there’s more interesting work to be done.

So what should we improve? It probably isn’t the exercises either.

The machine learning crowd seems very impressed by the millions of rows in their databases which represent the clickstream of hundreds of thousands of users. That clickstream can tell a teacher how many hints the learner requested, how long she spent on a given problem, whether she’s more apt to score well on machine-scored exercises in the morning or evening. But what the learner and her teacher would really like to know is what don’t I understand here? And machine learning has added very little to our understanding of that question. So there’s certainly value to be added there but I’m pessimistic that machines are in any position right now to evaluate a written mathematical assessment at anywhere near the skill of a trained human.

So what should we improve? We should improve what happens before the lecture.

Currently, the online math experience begins with a lecture. The implicit assumption is that students need to be talked at for awhile before they can do anything meaningful. Not only is that untrue but it results in bored learners and poor learning.

Dan Schwartz, a cognitive psychologist at Stanford University, prefaced student lectures with a particular challenge [pdf]. He asked students to do something (to select the best pitching machine from these four) not just to watch someone else do something. Those students then received a lecture explaining and formalizing what they had just done. Those students scored higher on a posttest than students who were pushed straight into the lecture without the introductory challenge.

I’ll show you an example of how this could work online. Head to this website and play through.

Let me explain what I’m trying to do there. First, any student who knows or can intuit the definition of “midpoint” can attempt that opening activity. It’s an extremely low bar to clear. The lesson will ultimately be about the midpoint formula but we haven’t bothered the student with a coordinate plane, grid lines, coordinate pairs, or auxiliary lines yet. Save it. Keep this low-key for a moment.

Once the student guesses, she sees how her classmates guessed, which queues everyone to wonder, “Who guessed closest?”

We’ve provoked the student’s intellectual need and set her up with the kind of introductory challenge that prepares her for a future lecture.

So we move into the lecture video, which has several goals:

After the lecture, the student sees the original problem, now with x-y pairs and a coordinate plane. No longer does she simply guess, aim, and click. She calculates. There’s are blanks for the answer now. We have formalized the informal.

The student calculates the answer and finds out how close she was. We should also throw some love on the closest guesser who may be a student who doesn’t usually get a lot of love in math class.

After that resolution, we ask students to practice their skills, but not just on automatically generated clones of the same problem template. We give them the midpoint and ask them to work backwards to one of the original points. That’s essential if you want me to have confidence in your assessment of my student as a “master” of the midpoint formula.

That’s it. An intuitive challenge that precedes a lecture video that explains how to resolve the challenge. That’ll result in more engaged learners and better learning.

And on and on and on. There isn’t a recipe for these challenge but I know two things about all of them:

Current online math websites have managed to scale up the aspects of decades-old math learning that few of us remember fondly. We can tinker around the edges of those lectures and exercises, adding a constructed response item here or a Morgan Freeman narration track there. Or we can try something transformative, something that draws from the best of math education research, something that takes advantage of the Internet, and makes math social.

A couple of useful tweets.

I’m concerned the competitive vibe appeals only to males, but FWIW this is exactly the kind of reaction I’m trying to provoke.

@ddmeyer super neat (no surprise), but how is my alternative method of finding the midpoint encouraged?

It isn’t! It’s passively discouraged, which is a huge bummer. I can think of at least two ways a student might think about the midpoint and how to find it. You can take half a side of the right triangle and add it to the point with the smallest value or you can subtract that half from the point with the largest value. Those multiple methods and the discussion about their equivalence are to be prized and they’re lost in the video lecture format. They’re lost. That’s absolutely a cost and not a small one.

2012 Nov 12. Mr. Samson reminds me of the Eyeballing Game, which has been nothing if not an enormous inspiration for the work I’m doing here.

2012 Dec 7. David Lippman does this discussion a favor and creates an environment where the video pauses for student input. Discuss.

Curiosity and engagement will always trump “real world” applications. Games, puzzles, being surprised or caught off guard with something new and trying to find out why, these are big tools in our teacher toolbox.

Great Classroom Action   Computers Are Not A Natural Medium For Doing Mathematics
Unless otherwise noted, everything you and I post here is licensed
for reuse under Creative Commons Attribution 4.0 International.