Here is a picture of a fountain from Pearson’s Common Core Geometry iBook. (Full disclosure: I consult with Pearson.) 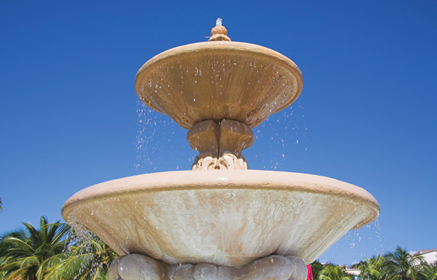 Given ten tries, you’d never guess the question connected to that image: “What is the measure of the arc of the circular basin of the fountain that will be in the photograph?”

Campers often use a “bear bag” at night to avoid attracting animals to their food supply.

It is followed by:

Not only will those questions fail to interest many of my students but they’re also unnatural and disconnected from the context to which they are attached. The fountain doesn’t want that question. The bear bag has no use for its question. Students notice that disconnect. Some have fully internalized that disconnect and concluded that math is some alien, otherworldly thing they’ll survive and then forget as quickly as possible.

What Do We Do?

Over at Dan’s site people have been discussing these last set of questions and we find, naturally, Dan promoting his brand of “Make the prompt scream the question you are looking for” …

I hear it too often in emails, tweets, and conversations after conference sessions:

“I asked them what questions they had and they asked the one I was looking for!”

“It took some time but I prompted them a little and they asked the question I wanted them to focus on!”

“They guessed the question I wanted them to ask!”

How can you tell in advance that a question will be interesting or seem natural to your students? Ideally, I’d have a room full of students I could run ideas past – an on-call focus group. I’d punch a button and they’d snap to attention. Then I’d introduce a context and a question and they’d give me a thumbs up or down. (Standard disclaimer: math is a context.) Maybe they’d suggest other, more interesting questions. That would be great – all of it – but I don’t have those students on call. I have you guys instead, and that’s way, way better than nothing.

BTW: Avery Pickford has some smart writing along these same lines.

Inquiry-based science teaching sometimes gets bogged down in similar games of “guess what the teacher wants you to say.” Â Almost as frustrating as known-answer questions are these, which I shall start calling “known-question answers.”

The Mullet Ratio   Five Favorites â€” 101Questions [5/5/12]
Unless otherwise noted, everything you and I post here is licensed
for reuse under Creative Commons Attribution 4.0 International.