Adventures In Plagiarism At #GSDMC12

I was sitting in a morning session with six other people at the Greater San Diego Math Council’s annual conference when I saw a slide that looked familiar. 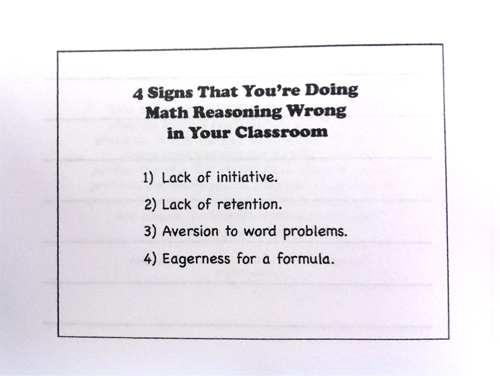 At first I figured I had read that language in some paper or another in grad school. (“Aversion” seems like the sort of language an academic might use to paper over a lack of insight.) Then I remembered I had used that language. When I wrote it in a presentation I gave two years ago. 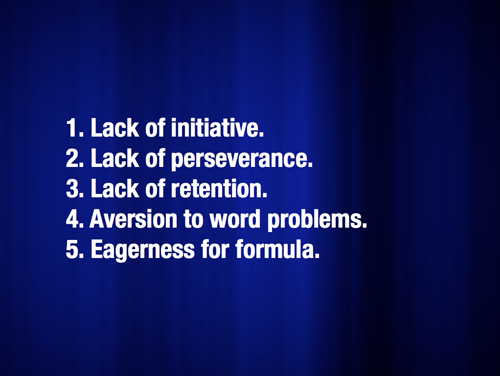 2011 Feb 3. Since you’re all no doubt dying for updates, my plagiarist attended my session this afternoon. (I don’t know why that surprised me. Of course he attended my session. Where else is he going to get fresh material?) This was before I e-mailed him. He came up to introduce himself as I was setting up. Before he got too far into his introduction, I said, “Yeah, I know who you are. I was in your session this morning.”

“You were?” he said, and very obviously winced. “I may have borrowed some of your material.”

He apologized several times. I thanked him. He left. I sent the e-mail. We’re square.

I’m seeing many commenters who think that frowning upon plagiarism is all about credit, but that’s a very shallow view. In this case, the plagiarist completely disconnected the audience from Dan Meyer’s extensive work in this area. That means they can’t read the extended discussions, they can’t draw on other related resources, they can’t contact the real author and ask their own questions. They can’t connect to the author to follow future developments.

The plagiarist is standing at the top of a well, with the audience at the bottom. He throws down a loaf of bread and a few pages from a book, and leads the audience to believe that basically that’s all that exists outside the hole, and he’s the only one who can provide it to them.

I really want to give the plagiarist the benefit of the doubt, that it was a stupid mistake that hasn’t happened before or since. But I can’t get past the idea that some of us spend 40 hours or more putting together the best 1 hour presentation we can. The plagiarist took the easy way out. It’s disrespectful to the original author, to the subject, and to the audience. I tend to think that disrespect like that doesn’t just randomly rear its head once.

What Silicon Valley Gets Wrong About Math Education Again And Again   Odds / Ends
Unless otherwise noted, everything you and I post here is licensed
for reuse under Creative Commons Attribution 4.0 International.