The ability to communicate is not essential to understanding mathematics.

[Mathematically proficient students] are able to analyze situations by breaking them into cases, and can recognize and use counterexamples. They justify their conclusions, communicate them to others, and respond to the arguments of others.

Feel free to jump straight to the task page.

The jist, if you aren’t the movie-watching type, is that whenever Wisconsin’s football team scores, their mascot has to do push-ups equivalent to Wisconsin’s total score. This screen grab is a useful talking point. 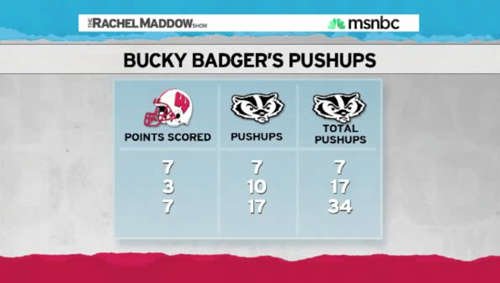 Play the first act, which ends after Maddow announces the final score of the Wisconsin-Indiana game: 83-20. “83 POINTS!”

Ask your students to write down a guess. “How many push-ups do you think Bucky did over the entire game?” Ask them to write down a number they think is too high and too low.

Here’s where it gets interesting. Ask them to write down all the information they’ll need to figure out the answer. That question is controversial even among math teachers at workshops I facilitate. Some argue that all you need to know is that Wisconsin scored eleven touchdowns and two field goals. Others argue that you also need to know the order of those touchdowns and field goals. In W. Stephen Wilson’s ideal math classroom, we’re stuck. Communication is inessential to Wilson’s ideal math classroom but communication is essential to any resolution of this dispute.

The mathematical practice standards require an argument. Both sides aren’t right. How will one side persuade the other? At this point, we learn a useful technique for arguing mathematically. One side has said, “Order never matters.” All we need to sink that rule is a single counterexample. One person suggests trying [7, 7, 3] and then [7, 3, 7] – the same scores in different sequence. Another suggests an even less costly test of [7, 3] and [3, 7]. And the matter is settled.

Having established that order matters, another question then arises: “If you’re Bucky, when do you want your team to score its field goals – at the end of the game or the beginning?” 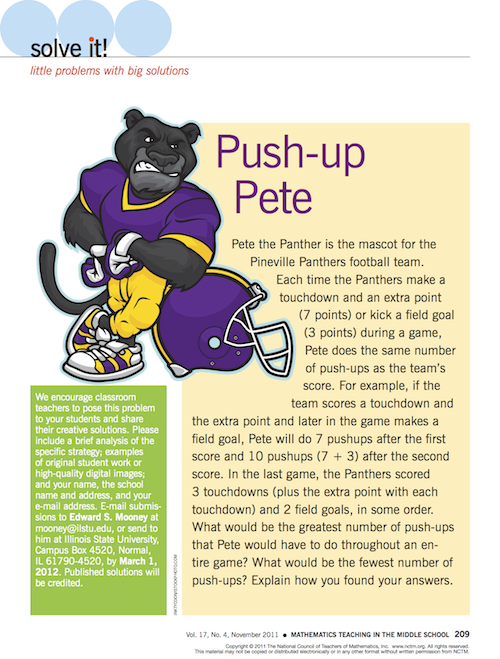 Sidenote #2: Opposition To The CCSS Makes For Very Strange Bedfellows

The CCSS aren’t remotely above criticism. It’s bizarre to me, though, how many edtech pundits leapt on that Fordham piece, grateful for any institutional validation of their position against the CCSS. But Wilson and Wurman, the authors, like the punditry’s technological utopianism even less than they do the CCSS. The enemy of your enemy is not your friend.

My best two students disagreed on whether order mattered and I was able to convince (falsely) one of them that order didn’t matter. And sure enough one of my “average” students — who always works her butt off but is rarely rewarded publicly in class for that work — was the only one to figure out and show that order matters.

Hot Links   Technology Is The Oxygen
Unless otherwise noted, everything you and I post here is licensed
for reuse under Creative Commons Attribution 4.0 International.