[LOA] What “The Literature” Says

If all of this ladder of abstraction material has seemed soft, fuzzy, and opinionated so far, I’ll offer up my summer project, A Literature Review of the Process and Product of Abstraction. Feel free to add comments or questions in the margins. I’ll try to get in there and chop it up with you. If you have written more than a handful of literature reviews yourself, I’d be grateful for your feedback on the format. 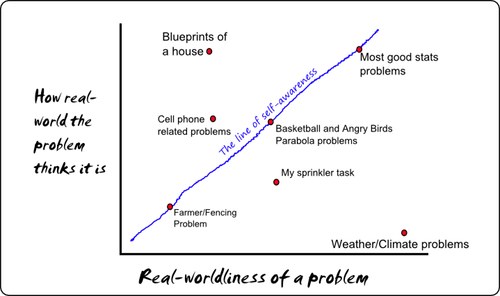 Geoff Krall examines different treatments of “real world” math – the lame kind and the good kind – and concludes that the self-awareness of the task is important. He excuses preposterous applications of math if they’re aware they’re preposterous. This is interesting, but his horizontal axis kicks a serious question down the road:

How do we gauge the “real-worldiness” of a task? Whose world? Is that scale absolute? How is “weather” more real world than “blueprints”?

Nevertheless, Krall’s post is important because, for one, it’s always useful to have new ways of talking about old things. For another, his post usefully highlights our total bedwetting panic over the whole real world thing.

“When will we ever use this?” is a question that’s Kryptonite for a lot of math teachers. Some have managed to script out answers in advance along the lines of, “Math is PE for your brain,” or, “You never use history in your day-to-day life either,” or, “Next week on the test.” But the fact that they’ve prepped themselves for an inevitable attack indicates a serious issue that needs more exploration.

So let me sketch out a different way of thinking about “real world” math. First, I’m convinced that the adjectives “real” and “fake” obscure a lot more than they reveal. They tap into an emotion that many of us intuitively understand but they aren’t persuasive to those who don’t. I’m going to swap out “real” and “fake” for “concrete” and “abstract,” which will be a little more helpful.

Here are two ways to think about the “abstractness” of mathematics. There’s what the context is and what you do with it. Let’s put those on two axes and watch what happens. 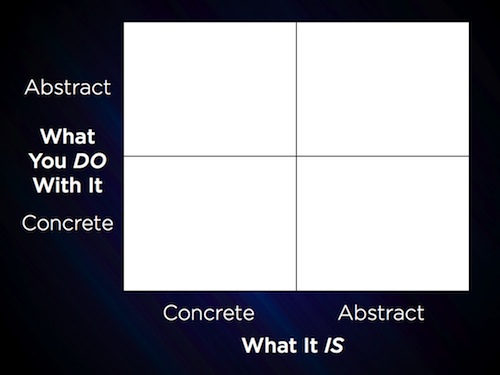 Math teachers pick away at the horizontal axis relentlessly, seeking newer, realer contexts for the same old tasks, but most of the gold is in the vertical axis. 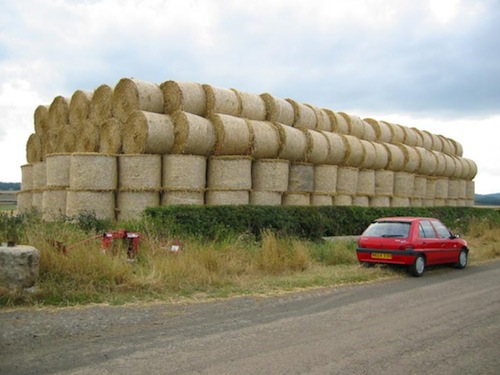 The other reason we should focus less on the concreteness of the context and more on the concreteness of the task is, as Bryan Meyer succinctly put it, “Kids don’t like feeling dumb.” Working at abstract levels without having worked at the concrete levels beneath them is like starting out lifting enormous weights without having worked up from smaller ones. It doesn’t matter if the weights are barbells, sand bags, or jugs of water. You’ll still feel helpless and small.

Our goal, of course, is that students will eventually work at higher and higher levels of abstraction. That’s where much of math’s power lives. But that doesn’t mean we should start there.

Let’s look at the four quadrants. 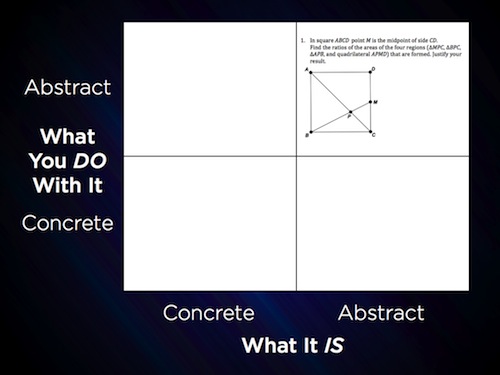 We can argue whether or not this context [pdf] is concrete or abstract. To me this context is concrete. Squares and diagonals and line segments are concrete to me, but I understand that this is what we often mean when we call a context “abstract.”

It’s easier for me to argue that the task – what you do with the context – is more abstract than it could be. Important features have already been highlighted and named. That’s abstraction. That’s work the student should participate in. Instead, we’ve started at a heady place, one that’s bound to make some students feel helpless and small. 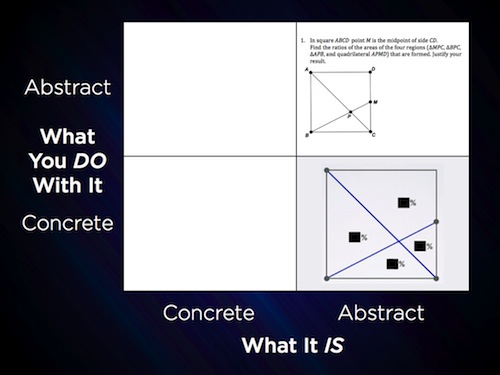 Take the same task from the previous quadrant. Remove the labels. Take away the names. Students decide what information is important and what to name it. They get to guess. Estimation is a concrete task –Â something you do while just poking at the surface of a context – one that students don’t experience often enough in math class. 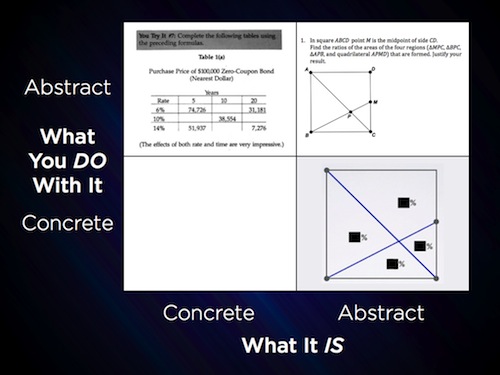 Math teachers grossly overvalue these tasks. Math teachers are eager for new contexts, new reasons for students to evaluate y = 2x + 4 for x = 50 (for example). The student asks where she’ll use this in real life so the teacher panics and swaps in another context. iPads. Basketballs. Fast food. Anything. Barbells. Sand bags. Jugs of water. It doesn’t matter. The trouble is that evaluating y = 2x + 4 for x = 50 is an abstract task. The abstract equation y = 2x + 4 came from somewhere and that place has been hidden from students. It doesn’t matter that the context is concrete.

These are concrete questions the students might need more experience answering before we move onto that abstraction. 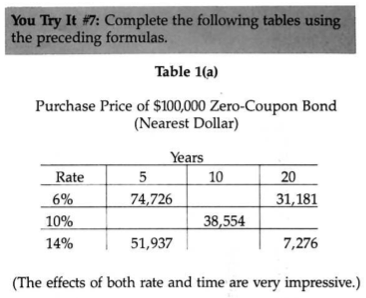 Money may be a concrete context but this task (from COMAP) is already abstract. The important information (the principle, the duration of the bond, the interest rate) has already been abstracted. It’s already been represented as a table. 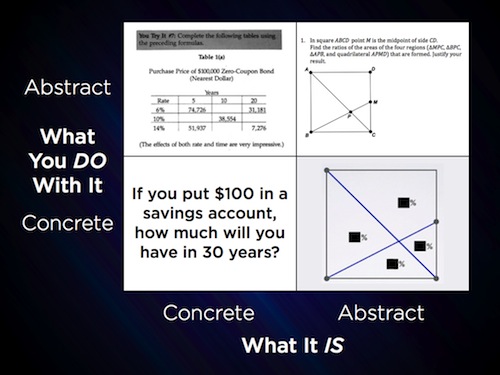 Don’t throw the task away. Just table it for a second. Ask students first, “If I put $100 in a savings account and walk away for 30 years, what will I find there when I get back?”

Students have a chance to guess here. Save those guesses and credit the closest guessers later. Some may say, “$100,” offering us an quick formative assessment of their understanding of savings accounts. They’ll have to decide what information is important and where to get it, like the interest rate at a local savings bank.

After they’ve participated in that abstraction, they’ll be much better prepared for COMAP’s abstract task.

So take something that’s concrete to your students and give them concrete tasks before you give them abstract tasks:

I’ve been exploring that kind of task for awhile now but I don’t think the “concreteness” or “realness” of the context matters anywhere near as much as the fact that those tasks all start with guessing and other concrete tasks.

If students are working on tasks that don’t make them feel stupid, tasks that make them participants in an abstract process rather than subjects of it, the “real-worldiness” issue all but evaporates.

Related: Bet On The Ladder, Not On Context; Cornered By The Real World.

Ever Get The Sense There Are Two Different Measuring Sticks?

Emma Brown on Teach to One, a rebranding of School of One, which attempts to teach math by warehousing students in front of laptops:

Results so far have been mixed. Two of the initial three New York schools dropped the program at the end of that first year.

In what universe are those results “mixed”?

Christopher Danielson on the Hierarchy of Hexagons:

My students proved that no Bob is equilateral. I would like to repeat that. My students proved that a Bob cannot be equilateral. I have never before been able to say that my future elementary teachers proved something. I could say before that they followed a proof I presented. Or that they produced a proof that closely mirrored one they had seen. But never that they proved something. This group did.

Hey did you know underclassmen are almost as easy to entertain with laser pointers as kittens? It’s true. This challenge has had them going on and off for hours.

Not bad for an English teacher who curls up into a fetal position every time I talk about math. And look! She used a variable! That saved a lot of time. And only five characters were needed! Awesome! What a convenient way to write that expression!

Mr. Owen on Graphing with Desmos:

I was surprised how quickly they were able to do it. They didn’t actually restrict the domains, but they made the general shape just fine. The best part was that they then wanted to know how to color it in. Well, “coloring it in” on Desmos means shading using inequalities. And guess what our next lesson just happened to be on. HA!! GOTCHA KIDS!!

Academic disagreement is an inevitable consequence of academic freedom, and I welcome it. However, responsible disagreement and academic bullying are not the same thing. Milgram and Bishop have engaged in a range of tactics to discredit me and damage my work which I have now decided to make public.

It’s gripping reading. If you had told me five years ago the kind of character assassination Boaler experienced was possible in higher education, I would have thought you were joking.

BTW: Jo Boaler is one of my advisers at Stanford. If Milgram and Bishop’s baseless attacks on her research had been successful, I would have missed out on her mentorship. So I’m linking to this essay out of both personal and professional interest.

BTW: She has a blog, a Twitter account, and this essay, all of which should be seen by as many people as possible.