What Do Adaptive Math Systems Really Know About What You Know?

So Knewton and any platform built on Knewton can figure out things like, “You learn math best in the morning between 8:32 and 9:14 AM. You learn science best in 40-minute bite-sizes. At the 42-minute mark your clickrate always begins to decline. We should pull that and move you to something else to keep you engaged. That thirty-five minute burst you do at lunch every day? You’re not retaining any of that. Just hang out with your friends and do that stuff in the afternoon instead when you learn better.”

These systems report so much time data because time is easy for them to measure. But what’s easy to measure and what’s useful to a learner aren’t necessarily the same thing. What the learner would really like to know is, “What do I know and what don’t I know about what I’m trying to learn here?” And adaptive math systems have contributed very little to our understanding of that question.

For example, a student solves “x/2 + x/6 = 2” and answers “48,” incorrectly. How does your system help that student, apart from a) recommending another time in the day for her to do the same question or b) recommending a lecture video for her to watch, pause, and rewind?

Meanwhile, these trained meatsacks have accurately diagnosed the student’s misunderstanding and proposed specific follow-ups. That’s the kind of adaptive learning that interests me most.

But then weâ€™d need like an entire army of trained meatsticks, each assigned to a manageably small group of students, possibly even personally invested in their success, with real-time access to their brains and associated thoughts, perhaps with a bank of research-based strategies to help guide those students toward a deeper understanding ofâ€¦something.

That seems an awful lot like a world without clickrates, and Iâ€™m not sure itâ€™s a world I want to live in. Or maybe Iâ€™m just cynical between 11:30 and 12:00, on average, and should think about it later.

If you have a class of students draw a rectangle, they’ll combine to create the golden rectangle.

Truly implausible, but Marc stood by it, along with at least one other member of our party. Dave Major set up a web page so we could collect data. You all obliged us with 1,400 rectangles, about a third of which I’ll show you in this video: 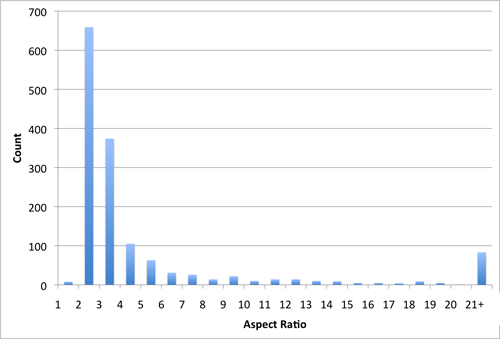 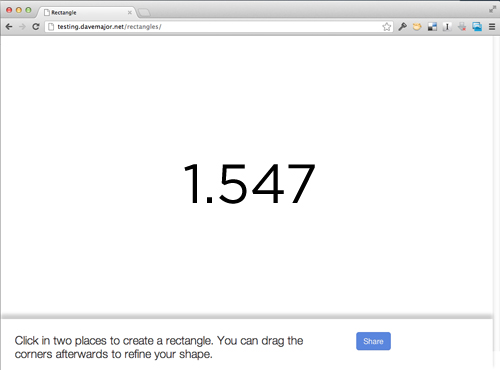 Not that either. Now a different dave owes me a new car too.

Here’s all the data. Tell us something interesting about them we don’t already know.

How could we improve this task? 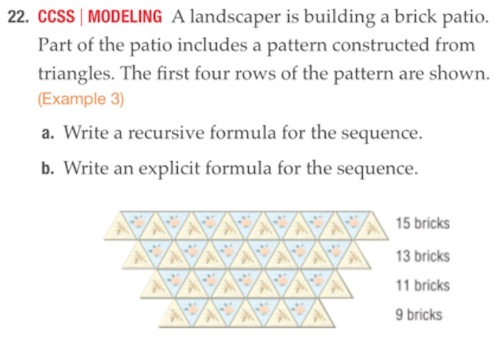 Fuller, Rabin, and Harel (2011) [pdf] define “intellectual need,” “problem-free activity,” and offer several ways to improve that task in one of the best pieces I read last summer:

The recursive part in the original question is especially annoying in that it sends the message that math is used to take something that is totally obvious (two more brick in the next row) and somehow make it seem complicated.

Would you do me and a few Canadian math teachers a favor?

Go to this link and create a rectangle. Press “Share.” Just do it once. Pass the link to your students if you’d like extra credit. I’ll tell you what this is all about in a couple of days. 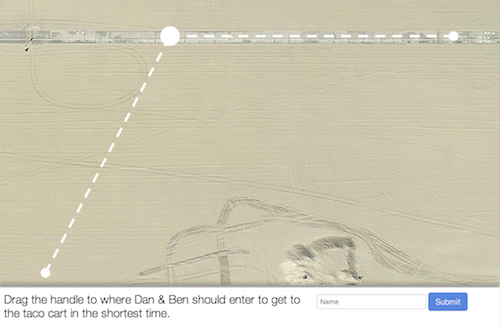 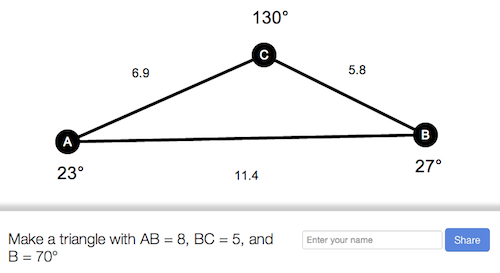 I keep thinking of learning a programming language, but didnâ€™t quite have a reason why. I think I have one now.