See, I had to do something about this problem:

This is one of those problems that wakes mathophobes up at night in a panicked, cold sweat. It’s so universally hated it’s a pop cultural cliché, a symbol of everything the layperson dislikes about math but can’t quite verbalize.

As math teachers, we step into the ring with this problem every year. In California you’re guaranteed at least one such problem on your summative student exam. But it’s a boutique problem. How much time can you really offer it in class? How will you treat it? There’s a fairly straightforward explicit formula for its solution:

Do you teach your students the formula and hope their memory serves? What kind of conceptual underpinning can you offer them without spending two weeks on it? In what ways can we improve this problem?

Since this problem represents itself as a real, no-fooling application of math to the world outside the math classroom, we owe it to our students to ask, “is this a good visual representation of that world?”

A: No. It’s clip art. We could upgrade the clip art to stock photography but both representations are decorative where we’d prefer something descriptive, a visual that is, itself, a useful site for analysis rather than mere drapery.

Here is that visual:

This makeover was challenging. The task (whether painting a house or filling a cup of beans) is its own unit of measure. Think hours per house or minutes per cup. If the students manage to determine seconds per bean, you still have a math problem, but the task has changed significantly. So I sped up the tape to preserve that task. Also, the house-painting problem assumes identical houses and a constant rate of house-painting, which is the kind of unreality that exists only to serve a math problem. Here, though, we have used multimedia to inoculate that pseudocontext. Here, the glasses are identical every time and the actors are listening to a song in their earbuds that does keep them working at a constant rate, even when they’re working together.

Again, I hear you: who cares about two clowns filling a cup with beans. Try it, though. Play the video. Ask your students what questions they have. Ask them how many minutes they think it’ll take Dan and Chris together. Ask them to put down a number they know is too large and a number they know is too small. Write five of their guesses on the board.

Then move on to whatever else you had planned for the hour. Let us know how that goes.

Lecture your way through the problem. Or, better, give your students a moment to reveal to you the tools they bring to the table. I’m only insisting here that when you make the brave (and, to the eyes of many students, ludicrous) claim that math has any application to the world outside the math classroom that you represent that world well and you get the motivation right. Your decisions past that will have a lot to do with your students, their developmental readiness, and your relationship to them.

But even if you lecture, don’t offer the formula. Build, instead, off their existing understanding of speed. This problem is nothing more than a strange unit for speed: percent per second. From there, what seemed complicated and dizzying becomes a straightforward application of rates: find Chris and Dan’s combined rate; divide into 100. 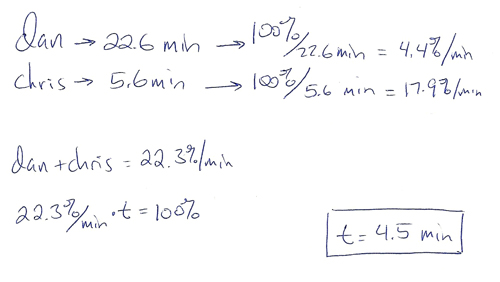 This is dramatic catharsis. I have no idea how to design a study to test for the effect of watching an answer rather than hearing it from the teacher’s mouth or reading it in an answer key but, anecdotally, it’s enormous.

Your students’ reaction to this extensions is a meter stick for the effectiveness of your approach in step three. Will they take it in stride? Will they fall apart? If they have an inflexible understanding of the problem they may take this approach:

Which is understandable, but incorrect. (This is the explicit formula for three people.)

In both problems, though, the formula obscures the fact that nothing more complicated than speed runs beneath this problem. I’d rather my students developed that understanding than a full set of what reader Bowen Kerins calls “single-use tools”:

High school math is filled with specific tools for one purpose only. Use this box to solve a word problem about people painting houses, but this other box for this other problem. Use FOIL to expand a binomial multiplied by another binomial, but don’t try it on a trinomial! It makes no sense, and contributes to students’ feelings that mathematics is a giant toolbox you either know or don’t know how to use. [via e-mail, with permission]

Jump back into that video I linked earlier. It’s a useful depiction of a locker room-full of students who understand math to be a giant toolbox you either know or don’t know how to use. Confronted with two numbers, they multiply, they add, they average. They’re just striking the two numbers against each other, looking for sparks, looking for a number they can live with. It’s impatient problem solving.

Then the mathemagician enters the scene, reveals the “simple formula,” and computes it. 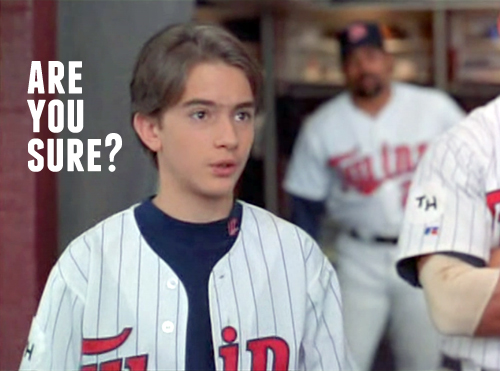 Check out the look on Junior’s face. It’s like he’s seen a magic trick. He asks, “Are you sure?” and then takes the mathemagician’s word for it. Meanwhile, we’ve upgraded the representation of the problem and not one of our students has had to take our word on the answer. They just watch it.

I passed out calculators for the bean counting problem, but made them give guesses (and back them up) first. Some couldn’t wait, and started crunching numbers.

The catharsis was definitely more potent in the bean counting video than the Little Big League video (“Wait, what’d he say?”). Once the time stopped at 4.5 minutes, students started with bragging.