It’s hard to know how much disclosure is worthwhile here. For my own sake, I’m going to post a reminder to myself that this was the quarter I thought I was juggling everything like a champ only to have basically everyone in my life, in the same week, point out that I was only going through the motions of a world-class juggler. All the people, tasks, and things I thought I was juggling with such verve and style were lying on the ground around me.

There were basically endless ways to invest a few dozen hours this spring. That included interesting classes and projects at Stanford. It included the week I spent in Singapore learning from and working with ten of the world’s best math curriculum designers. It included speaking, workshops, and webinars. It included Graphing Stories, a project that seemed too fun not to pursue even though editing 160 stories cost me a pile of time during finals week.

I half-assed my way through much of it, convinced the entire time that I was owning all of it. In my first-year review, my advisers were rightly concerned about me, and about Stanford’s investment in me. I’m putting in a hectic pace this summer (see below) after which I need to sit down and take a machete to my calendar and day planner.

One outcome of the first year of grad school is that I became a faster, better writer. Blogging for years on an if-I-feel-like-it basis didn’t do much for my proficiency and speed at assembling an argument. Reading great writing daily (see below) and being asked to write a few thousand words about it every few weeks has done a lot of good for me. (I need to get faster at reading, though.)

The other outcome of this last year is that I’ve gone a long way to shed what Labaree (see below) calls the “normative view” of education. I’m less concerned with how I think things should be, with proving out my own pet theories, and more interested in accurately describing how they are. At the same time, other professors will insist that your pet theories are the reason why you were invited to doctoral study at Stanford. This is a tension I don’t expect to ever resolve. It’s a feature of grad school, not a bug.

The Sum Of My Research Interests

We submit a paper at the end of year two – a fun-sized research project, basically – that qualifies us for doctoral candidacy. The final project of the first year was a proposal for that study. My exact research question for that paper is this:

What teacher moves during a task’s launch lead to its productive implementation by the students?

Elaborating further, I taught a class a few weeks ago at my old high school. I popped in to say “hi” and wound up leading two activities for my old department head. In both cases, I had to launch the tasks. I set a scene and questioned the students about it to the point that I thought we were ready to work within it. With one problem, the task transitioned smoothly from launch to productive work. In the other, the task made a rocky transition. I find that moment of transition suspenseful, highly motivating, and worth some study.

I read the last few pages of Augier & March five times, and the last paragraph, which features one of the most satisfying turns of a phrase I’ve read in grad school yet, a few more than that. I’d give a finger to be able to write a tenth as well as this team. (Rumor has it that March is the poet of the two. Reportedly, he rejects a syllabus for his Stanford business courses, assigning novels, poetry, and Homeric epics instead.) ¶ Berger & Stevenson wasn’t assigned but it’s valuable for anyone trying to carve out a living within education, but outside the classroom. ¶ Delpit explains why some minority parents prefer lecture and drill-oriented skill practice. ¶ Doyle & Carter describes the negotiation of a task between teacher and students better than anybody. This is high drama. You’re watching Ms. Dee start with a high-value academic task that her students negotiate down to nothing. ¶ Erlwanger’s piece was assigned as an example of research that has a) stood up over time and b) affected policy and practice in spite of its small sample size. ¶ The piece by Jackson, et al, isn’t available yet (though the author, herself, was extremely forthcoming) but it is the most forceful take on the task launch I’ve read yet. It comprises, like, 90% of the conceptual framework for my qualifying paper. ¶ Labaree’s proseminar course could basically be described in a single line: “why reform is hard to pull off.” Every time I read his stuff, I found myself thinking, “Oh so this is why Scott McLeod and Will Richardson are so angsty all the time.” His second piece describes the transition from teacher to researcher in a way that had all of us classroom expatriates nodding our heads grimly. ¶ The question no one seemed to be able to answer convincingly was “What is a conceptual framework, exactly, and how does it differ from a literature review?” Lester goes a long way, though.

Jackson, K. (2011). Investigating how setting up cognitively demanding tasks is related to the opportunities to learn in middle-grades mathematics classrooms.

Jackson, K. (2009). The social construction of youth and mathematics: The case of a fifth-grade classroom. In D.B. Martin (Ed.), Mathematics teaching, learning, and liberation in the lives of black children (pp. 175-199). New York: Routledge.

I’ll be in ten states doing ten workshops and keynotes this summer. Three of those are still open for registration. Details here. 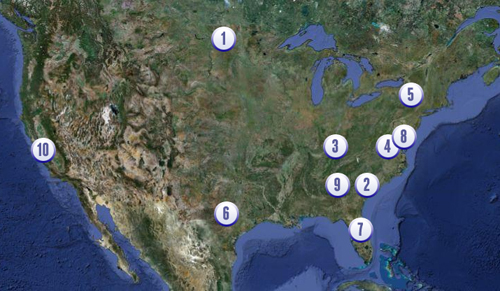 Which Is The Better First Act?   John Burk’s Mushy Love Ode To His Online PLC
Unless otherwise noted, everything you and I post here is licensed
for reuse under Creative Commons Attribution 4.0 International.