Two things I’d do if I were still doing the job instead of just talking about it:

Set Up The Expected Value Spinner

This is tricky to fathom in gambling where superstition rules the day. (“Tails never fails,” betting your anniversary on the pick six, blowing on the dice, etc.) So one month before our formal discussion of expected value, I’d print out this image, tack a spinner to it, and ask every student to fix a bet on one region for the entire month. I’d seal my own bet in an envelope. 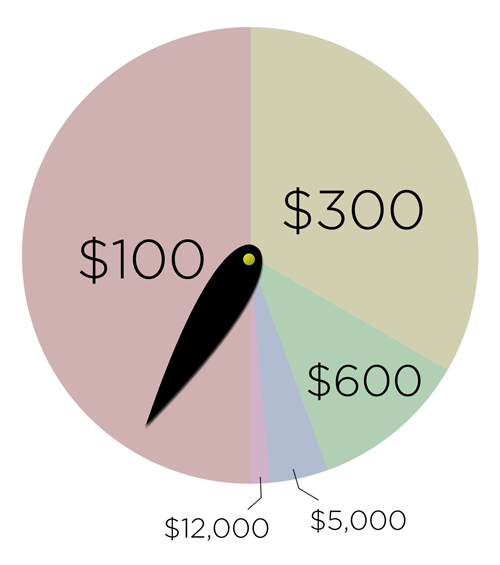 I’d ask a new student to spin it every day for a month. We’d tally up the cash at the end of the month as the introduction to our discussion of expected value.

So let them have their superstition. Let them take a wild bet on $12,000. How on Earth did the math teacher know the best bet in advance?

BTW: You could make an argument that a computer simulation of the spinner would be better since you could run it millions of times and all on the same day. My guess is that your simulation would be less convincing and less fun for your students than the daily spin, but you could definitely make that argument.

Tonight’s homework: Find some stairs. Calculate their slope. Describe how you did it. Take a picture.

Your students should then determine whose stairs were the steepest and the shallowest and you’ll post those photos at the front of the classroom. You’ll make a big fuss over them. Then you’ll post a bounty for stairs that will knock them off their perch.

One interesting thing about slope is that it doesn’t have a unit, so you don’t need a measuring tape or a ruler to calculate it. Anything your students have on hand will work, including their hands.

Be prepared for a contentious discussion about the difference between the tallest steps and the steepest steps. It’s possible to design steps that are extremely shallow but too tall for anyone to climb up. Wrap your students’ heads around that one.

Be prepared also for students who can’t shake the sense that math is here every time they climb up a new set of stairs.

What a cool job the rest of y’all have.

Palo Alto High School Math Teachers: Some Of Our Students Objectively Can’t Learn Algebra   Sweat The Small Things
Unless otherwise noted, everything you and I post here is licensed
for reuse under Creative Commons Attribution 4.0 International.