Which is a better treatment of that problem with the rectangle’s diagonal? How are you defining better? Better for what purpose? Help me out here. 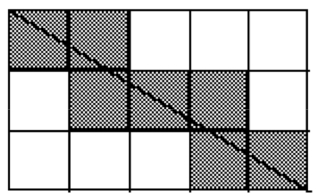 My own treatment, submitted for review, correction, and debate:

How many squares will the diagonal of the large rectangle cut through? [This question added because it wasn’t clear I’d ask it – dm]

I’ll follow up in the comments at some point on the decisions that went into my redesign.

2011 Dec 1. Check out David Cox’s parallel investigation of this problem, leading to an incredible Geogebra applet.

Interesting Things To See At CMC-North This Weekend   Pretending Closed Questions Are Open
Unless otherwise noted, everything you and I post here is licensed
for reuse under Creative Commons Attribution 4.0 International.