Pseudoteaching: What Was Complex Becomes Routine

John Burk and Frank Noschese are running a pseudoteaching meme I encourage you to explore for yourself. Their definition:

Pseudoteaching is something you realize you’re doing after you’ve attempted a lesson which from the outset looks like it should result in student learning, but upon further reflection, you realize that the very lesson itself was flawed and involved minimal learning.

I think we’ve all had the experience of giving so much structure and help that the problem becomes a simple routine problem when it wasn’t originally. 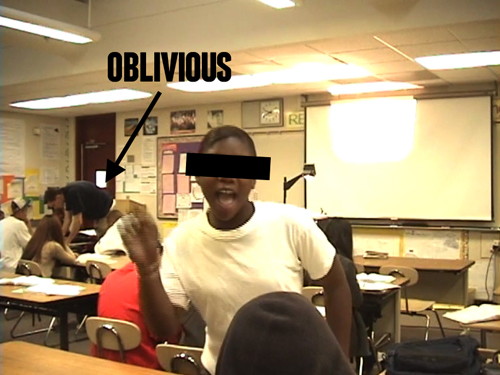 I don’t like to think about my student teaching year but for the sake of the exercise let me describe my PACT lesson, which, if you’re in California education, you know is the summative assessment of your worth as a preservice teacher. It was a precalculus class and the objective was an understanding of rose petal polar functions like r = 3cos(2theta). Students will be able graph the family. Students will be able to describe how each coefficient affects the graph. Etc.

As I recall it, I was up at the front of the classroom with a TI ViewScreen showing them graph after graph, asking them to determine what the a is doing to the graph of r = asin(3theta).

Then how does b affect the graph of r = 2sin(btheta)?

Then how do sine and cosine differ? 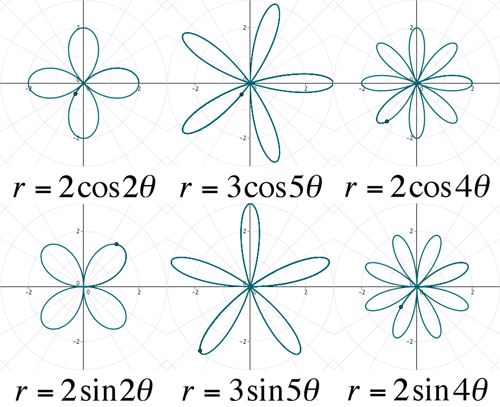 Then I assessed their knowledge of rose petal functions with a worksheet of graphing problems. 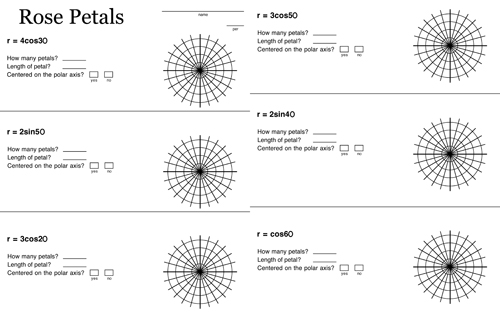 I thought my students understood the behavior of r = acos(btheta) on a deep level but they were only responding to superficial patterns in notation. (My supervisor positively thumped me for that one.) Many of you readers – even the straggling humanities instructors we haven’t yet scared off – can see from the graphs above that the petals double when b is even, that the petal length is equal to a but do any of you understand why? Do you know why the graph of r = cos(2theta) has four petals? Could you tell me why the tip of the first sine petal is always on the polar axis? (Not for nothing, the scaffolding in the worksheet also ensures I’m only getting pattern mimicry out of my students.)

Unless you understand what an algorithm is going to do, it isn’t going to make sense to you.

The students have to develop the algorithm themselves. Given a second chance at that mess, I’d get students in groups of three or four and let each student pick a member of the family of the functions – “Okay, you do r = 1cos(2theta). I’ll do r = 2cos(2theta). You do r = 3cos(2theta).” Rather than watch me mashing buttons at the front of the room, students would graph their functions by hand and then summarize their findings to each other and then the class. Maybe with a poster – your call. Questions from the teacher would then include everything in the breakdown above, everything I missed six years ago.

I Have The Coolest Hobbies   Education Week Webinar feat. Yours Truly
Unless otherwise noted, everything you and I post here is licensed
for reuse under Creative Commons Attribution 4.0 International.