[PS] Operations That Have Nothing To Do With The Given Context

Here are three problems that satisfy the second half of the working definition of pseudocontext. I cop to a lot of guilt at the end of this post. 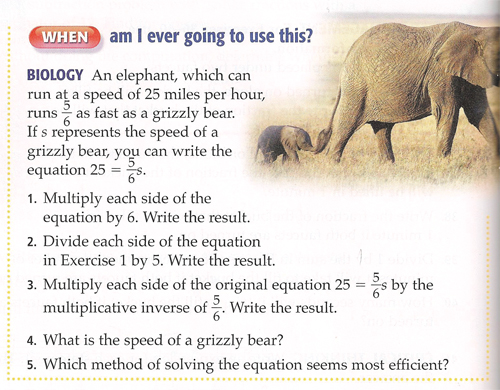 Can you spot the common problem?

The author has fit an equation to a context that doesn’t want or need it. Does anybody think the elephant/grizzly problem would be any less engaging if we just described “a mystery number, five sixths of which is 25?”

And I’m guilty. When it comes to systems of equations, I shake a handful of coins and ask students to write down how many coins they think they hear. We trade guesses and I tell them “40 coins.” The best guesser gets some love from the class. Then I ask them to tell me how much cash they think I have in my hands. They ask me for the denominations of the coins. (“Nickels and dimes.”) We trade guesses again, reveal the answer again (“$2.75”), and congratulate the winner again. Then I ask them if they think there’s more nickels or dimes and why. Then we figure out the answer exactly, first by guess-and-check, then by systems of equations as I introduce an unmanageable number of coins. Then I confirm the answer visually.

But seriously: nothing inherent to a handful of nickels and dimes would lead a student to formulate and solve this system of equations.

Nothing. Our arrival at that system of equations was painless only on account of a lot of coy teacherly showmanship. Does that theatricality – the shaking coins, the cocked eyebrow, the dramatic pause before the question, none of which is included in the problem as written in the textbook – inoculate the pseudocontext? Am I absolved if I don’t pretend this is (as elephant/grizzly puts it) “when you’re going to use this?” I’m not sure. I’m only sure that implicit in my use of pseudocontext here, whether I’ve inoculated it or not, is the admission that I’m empty-handed when it comes to a real context for systems of equations. I’m admitting that we only use this stuff in silly games.

[Help Wanted] Seattle Qwest Stadium Beer Cups   [It Got Away] Ladder Spreaders
Unless otherwise noted, everything you and I post here is licensed
for reuse under Creative Commons Attribution 4.0 International.