[It Got Away] Vermont License Plates

So I’m in Colchester, VT and I’m noticing the license plates.

Three letters followed by three numbers. Every time. The second you fix a format like that, you’re dealing scarcity. Just like in Costa Rica, I’m wondering, “How many license plates are available?” I’m also wondering, “Is it possible to determine the order in which those plates were issued? Can we guess it?”

Then one of the teachers at the school where I’m facilitating the workshop mentions that the first license plate issued was “AAB100” and that Vermont only recently issued “F-----.” Now we’re on our way to a timeline and we’re dealing with the much more interesting question, “When will they run out?”

I called the Vermont Department of Motor Vehicles, which pinballed me around between various confused functionaries until I reached a person who e-mailed me a trove of data, including the one-, two-, and three-letter combinations they don’t allow under any circumstances on their plates. (NSFW, I suppose.) Now we have a scarcity problem with prurient appeal.

So here’s the question:

You’d have to calculate the total possible plates, excluding the disallowed combinations while respecting the DMV’s various constraints. (eg. you’ll never find a zero in the hundreds place; “FU----” is disallowed while “-FU---” is allowed.) You have to gather some data on yearly issuance of plates. The better the model’s fit (ie. if exactly 60,000 plates are issued every year) the better our mathematical investigation will focus on our targeted skills.

Alas, the model is all over the place. 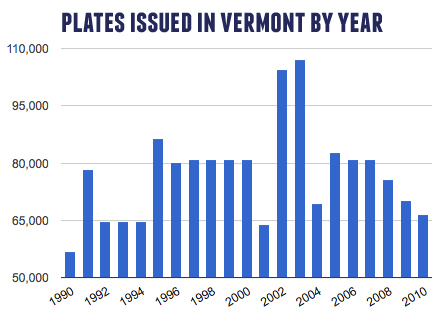 [BTW: I changed the chart type per Tom’s recommendation.]

So maybe you reduce the data to a single average of 77,229 plates per year and proceed as planned. Maybe you leave the problem at “how many license plates are available?” and set aside the issue of time. Both options kind of bummed me out, though, so I scrapped this one.

[It Got Away] Ladder Spreaders   [It Got Away] Red Rock Coffee
Unless otherwise noted, everything you and I post here is licensed
for reuse under Creative Commons Attribution 4.0 International.