[Help Wanted] Does The Medium Matter?

2011 June 13: No more help needed on this one. Thanks for piloting this study for me, team.

If you’re still in school, if you still have students around, I’d be thrilled if you’d help me answer a question that’s nagging me.

If you pose this question to a student:

It took Michael Benson six minutes to run one mile in a timed trial at his school – his fastest time ever. How long would it take him to run a 26-mile marathon?

My speculation is that math class pretty effectively conditions that sensibility out of a student by the fourth or fifth grade. It’s very difficult to succeed at math class if you don’t train yourself to ignore entropy, gravity, friction, and a million other factors mitigating these tidy word problems.

But does the medium matter? If you present those two sentences in black and white on paper, are the results worse than if you present them in a medium that’s more befitting the context? Like a video? Or a newspaper clipping? 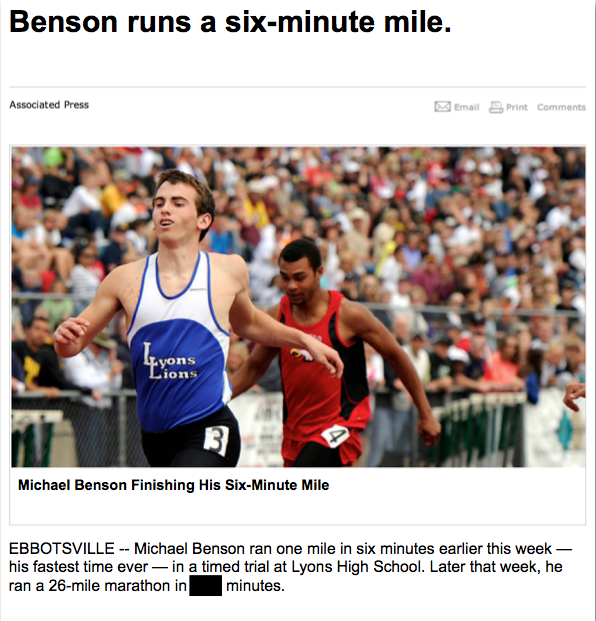 How You Can Help Me

I’ll need to know the letter grade of each student, too. And the course they’re taking. Can I get any volunteers to raise a hand in the comments? I’m not going to pretend this isn’t a huge favor. You can consider me in your debt.

2011 June 7. To clarify, would you be sure to send the forms back without the student names. Feel free to just attach numbers to the top. (“Student #1,” “Student #2,” etc.) Or anonymize them in some other way. I only need some way to link the student’s response to her overall class performance.

The Perplexity Session â€” 9/10/11 â€” Mountain View, CA   Tom Sallee’s Two Lies Of Teaching
Unless otherwise noted, everything you and I post here is licensed
for reuse under Creative Commons Attribution 4.0 International.