Last Wednesday at UC Berkeley in Alan Schoenfeld’s class on mathematical thinking and problem solving, Kim Seashore wrote the following paragraph on the board:

Eric is standing at the end of a line of fifty sheep, waiting to be sheared. He is hot and impatient. Each time a sheep is sheared and Becky, the sheep shearer, turns to put the wool away, Eric sneaks around the next two sheep in line.

“What question am I going to ask next?” Seashore asked us. We thought for a moment and then shared out responses. Here are a few:

“Great,” Seashore said. Then she had us categorize those questions:

Then she asked us to work for awhile on a question that interested us and was answerable. One person took up “how much wool?” and she asked him to be explicit about his assumptions. After ten minutes we grouped ourselves and explained our work to other people.

A Few Notes On This Scene 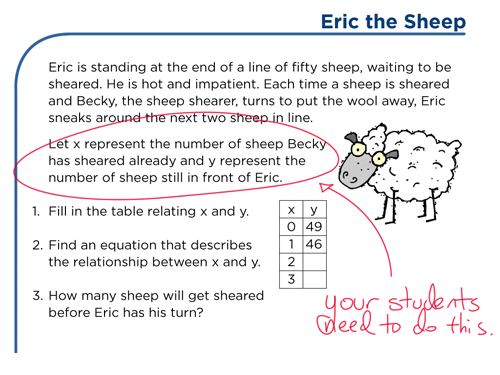 2011 Sep 20: Bowen Kerins locates the original text of the problem, which mercifully leaves the hard work of abstraction to the student.

A line of 50 sheep makes me wonder why I would ever have to use variables to represent the problem.

A line of 1,000 sheep makes me wish I had an easier problem – one I could actually act out.

Shearing a line of 1,000 sheep? Eric will be waiting a very long time.

Cornered By The Real World   That Was Bananas
Unless otherwise noted, everything you and I post here is licensed
for reuse under Creative Commons Attribution 4.0 International.