I didn’t have sound at my morning presentation at CMC-North last weekend. That was on me, and it wasn’t an enormous deal anyway. I told the people there I was sure we’d get through it together. I was right, but I had no how right I was until we were starting into my explanation of mathematical storytelling. I was showing shots from the first acts of Star Wars, Jaws, and Raiders of the Lost Ark and the absence of music in each of those scenes was pretty conspicuous. But then we heard the music. It started in the back with a few people humming out The Imperial March from Star Wars and then it rolled over the rest of the group. I added the “pew pew pew!” of the ships volleying shots back and forth.

I love this conference and I love these people. They’re smart, optimistic, and funny. The lineup is unusually strong. The venue is world class. You should stop by sometime. Here are a few things I saw and did and the digital goodies I grabbed for you while I was there.

Bix Beeman on the Math of Surveying 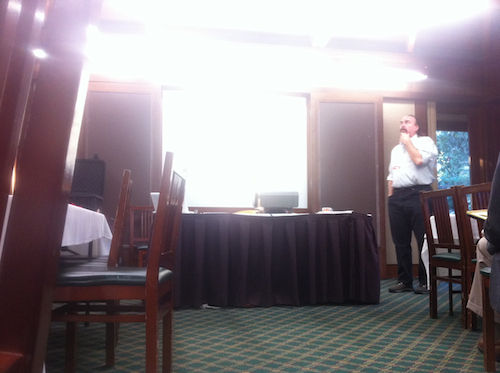 The official word on the Asilomar grounds is that it’s 107 acres. But how do they know? It’s a weird shape. How do you capture the area of weird shapes and, in this case, the area of weird shapes that are larger than the paper on your desk? Beeman took us up through different solution strategies, all the way from counting squares on grid paper to the matrices and determinants of the Surveyor’s Area Formula [pdf]. It would have been great if he had given us much time to play with the different methods and discuss the tradeoff between complexity and accuracy. As it was, we rushed through (eg.) Pick’s Theorem so that in the last ten minutes we could use TI calculators to calculate the area formula across all the coordinates bounding the Asilomar grounds.

All snark aside, I do not get TI technology. I’ve used an iPhone for the last four years and the C++ programming language for the last ten weeks and, suddenly, I cannot find the appeal of a device that displays a total of 128 characters at a time in black and white. I mean, try to read a single line of the spec sheet without pitying the poor copy editor who had to write it. “2.5 times the processor speed of the TI-83 Plus.” Well! “Lists store up to 999 elements.” That many! “24KB of available RAM memory.” It just feels mean, at a point.

Beeman hinted at various times that your students will become docile and engaged as they’re copying coordinates and instructions into their calculators.

I don’t actually doubt this is true. Given the choice between a demanding task and grinding, students regularly choose grinding. There’s a lot less risk. But if you give a student this page of instructions [pdf], what work is left for her to do? What are the odds she’ll be able to conceptualize and solve her own problem later?

BTW. Here’s a fundamental difference in approach. Beeman told us early on that the official survey of Asilomar was 107 acres. Then he said, “Let’s see how close we can get to that.” Me, I would have asked the class to guess how many acres comprised Asilomar. Then, after we applied our best mathematical analysis to the task, we would have checked our work against the official survey.

I’m finding the contours of this talk a little too familiar lately. I’ll be giving it in February at GSDMC, then in April at NCTM, at which point (fingers crossed) I’ll film it, post it to the archive, and move on. 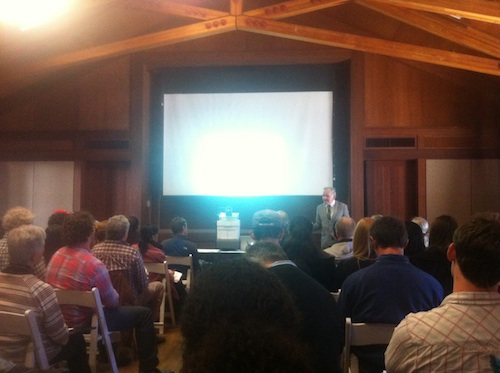 Someone said this was the fortieth edition of Harold Jacobs’ annual “Mathematical Snapshots” talk at Asilomar. It was my first. Basically, Jacobs has a sharp eye for mathematical moments in the news or in life. He summarizes them annually in his session and then passes them out at the end on a CD-ROM, which I have uploaded for you here. Jacobs said this was his first snapshots talk using a digital projector (rather than projecting transparencies) and, I have to say, he was a total natural with the medium.

Jacobs’ snapshots fell into one of two categories. In one case, he’d read off tidbits from the news that hinted at something mathematically interesting. Like this cornball who insists he’s proven that pi is rational and is, in fact, 3.125. These were interesting but nowhere near as impressive as the snapshots which he attempted to turn into some kind of challenge for students, giving them some part to play in the interesting mathematics. Like the Italian woman who received a $44,500 parking ticket because the police officer set the date at 208 instead of 2008. Jacobs asked students to calculate the correct fine.

Excellent curation, really. I’m not sure I needed the presentation, though. Let’s work out some kind of rotation for next year and share the CD, okay? 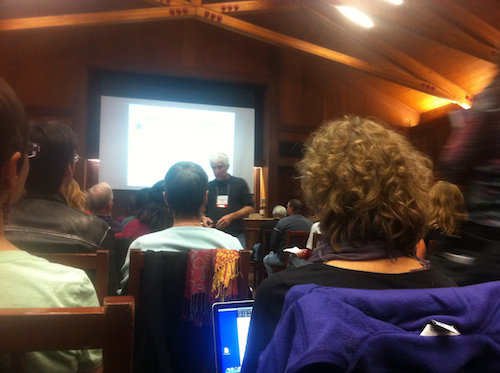 I had lunch with Jodie T, whom I hadn’t seen since our days learning to teach in the same cohort at UC Davis, and we worked off the lunch coma in Michael Serra’s session on math games. There were a lot of classics (Knight’s Tour, Battleship / Treasure Hunt) but Serra applied some kind of twist to each, ratcheting up the demand (and fun) of the task just past the point where I would have quit. Definitely check out the handout. 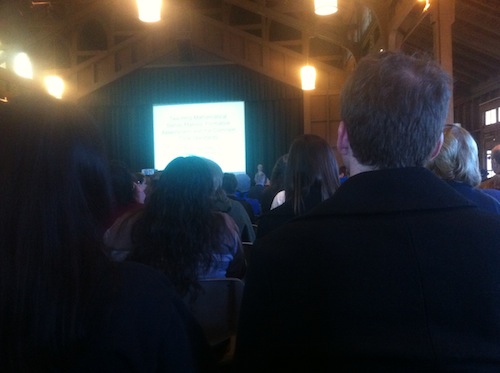 Schoenfeld advises the SMARTER Balanced Assessment consortium. He made a case for the quality of the consortium’s work and he laid down high odds for the success of its Common Core assessments. I can’t speak to his second point. The politics of math education (particularly in California) go back to when the Hatfields accused the McCoys of de-emphasizing procedural fluency. I felt he made a strong case for the quality of the assessments, though, particularly if your alternative is the California Standards Test, as it was for everyone in the room.

Here’s the case for quality. SBAC draws heavily from the talent pool at the Shell Centre in England, which includes Malcolm Swan, whose exemplary work I’ve covered here and here. These are exceptional educators and task designers, but you don’t have to take my word for it. The Shell Centre has released a pile of sample assessment tasks. Here’s one: Compare that to the released questions from California’s Geometry CST [pdf]: The new assessments are more challenging and they reveal more about a student’s thinking. (They’re critiquing arguments. On a math test.) Check out the rest and let me know your reservations. 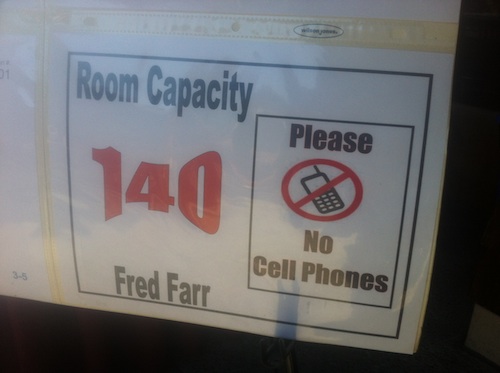 Here’s a terrifying thought. It’s 2032. I’m fifty years old, still a CMC member, still attending Asilomar, but Merrill Hall is only half-full for the closing keynote and everyone attending has white hair. Nobody came up the ranks in the last twenty years, in large part because the CMC-N conference-going experience would still be totally at home in the 1990s, right down to the TI calculator sessions. (Sorry. No more jokes.)

There were nineteen tweets on the #cmcn11 hashtag this year, a third mine. Someone at CMC-S e-mailed me a long-ish note to ask permission to livetweet my session, which to the best of my knowledge never happened. They passed out CD-ROMs of session materials in the conference bag. There are better options for conference scheduling than PDFs but a PDF of the program would beat whatever this is: 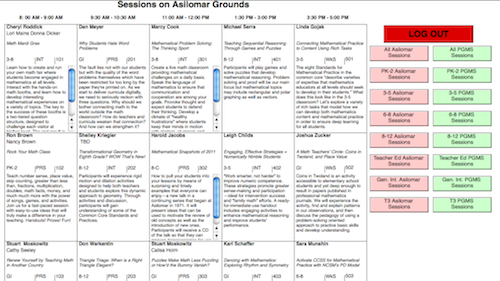 I’d like to start an off-the-books sub-committee, a place to brainstorm some ideas to present to the conference planning committee, many of which we’ll implement ourselves at CMC-N 2012. If you’re a CMC member (either South or North) and want a piece of the action, email a good idea for upgrading the CMC conference-going experience (so I know you’re serious) to ddmeyer+cmcupgrade@gmail.com.

Upgrading QR Codes   Interesting Things To See At CMC-North This Weekend
Unless otherwise noted, everything you and I post here is licensed
for reuse under Creative Commons Attribution 4.0 International.