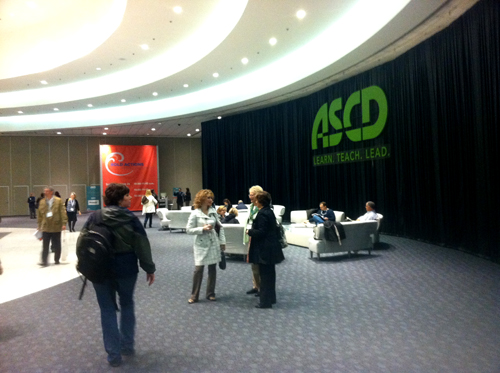 I was sitting in the first of four sessions I attended at ASCD’s annual conference when the presenter asked all of us to introduce ourselves to our neighbors and discuss a particular prompt. I turned to my seatmate and said,”Hi, I’m Dan.”

“I was noticing your press badge,” she said, without introducing herself. “I have an implicit distrust of the press. Do you mind if I make up a fake persona?”

“You know what, don’t worry about it,” I thought, and discontinued the conversation as politely and quickly as I could. 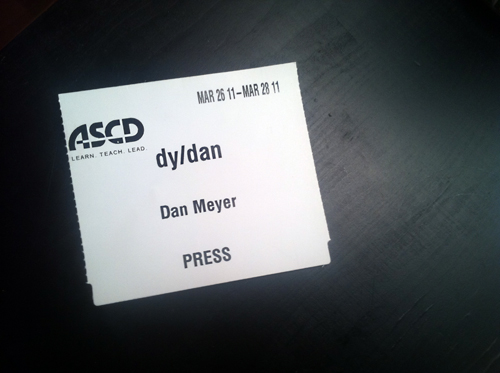 Right. So I’m the press. The fourth estate. ASCD reached out to several local bloggers, offering to comp our registration in exchange for coverage. Let’s get into it. Here are the four sessions I attended in my first and only day at #ASCD11:

You can ask any one of 9,000 educators for their impression of Chip Heath’s keynote. (Here is David Cohen with a nice take, for instance.) Lynell Burmark has been on this blog’s radar for a good three years. As someone who occasionally exchanges speaking services for checks made out to “Cash,” I figured I’d attend and see what tips I could pick up and perhaps inquire also about the design decisions that went into the cover of her last book. I took off when it became apparent that I probably wasn’t her target audience.

So I’m only recapping the sessions from Heidi Hayes Jacobs and Davis & Nickerson.

Jacobs was an ASCD featured speaker and she gave a confident talk at TEDxNYED a few weeks ago so I settled in. Her recommendation was for both short-term and long-term upgrades to our schools: a) teachers need to make one-to-one replacements of curricula while b) administrators need to replace old systems with new ones, all supporting 21st-century learning. She had both the microscopic and macroscopic lenses. It was a talk that let no one off the hook. No matter what your role in a child’s education, she had a job for you.

My seatmate and I never really recovered from our contentious introduction but even setting that aside, I was irritated throughout most of Jacobs’ talk. I found it difficult to pin down the specific, gnawing source of the irritation but here are some possibilities:

Jacobs pitched her products nine times over ninety minutes — six references to her book, three references to the website of her consultancy.

She recurred frequently to catchphrases (ie. “Paper. Is. Over,” “I have met the enemy: the #2 pencil.”) They were bombastic and guaranteed to pop up a few times on the #ASCD11 hashtag but they were only meaningful to the extent that you brought to them your own meaning.

Her style was passive-aggressive and frequently sarcastic. After dazzling the crowd with a Gapminder demo, she said, “Don’t use it. Use your laminated charts instead.” After demonstrating Wordle and Visual Thesaurus, she said, “Or don’t use them. They’re free.”

Her implementation designs were sketchy. I very much appreciated that she came with a particular rubric to guide our replacements. They should either a) give students more ownership, b) engage them more, c) or create a more quality product. (I’m not saying those are the exact elements I’d choose. I’m just glad she had something more than “new = better.”) Also, she emphasized several times that it wasn’t enough that students are creating new media like (eg.) podcasts – they need to create good podcasts.

Still, she spent a lot of stage-time demoing web apps, dazzling her audience into submission to her message (the times, you see, they are a-changing) with much less clarity on what educators are supposed to do with those apps. For instance, with Wordle and Visual Thesaurus, she recommended students run their essays through Wordle to identify the most frequently-used words and then run those words through Visual Thesaurus to swap them out with synonyms – a find-and-replace strategy that sounds just about right for churning out flimsy essays overburdened with fifty-cent vocabulary. We moved quickly along to the next tool.

Her embrace of new media was quick and uncritical. TED talks? “Students should be giving TED talks.” iOS apps? “By the end of eighth grade every student should create an app.” Screenplays? “I rarely find a school that requires every student to write a screenplay.”

She checked herself there and clarified that screenplays are a 20th-century medium – Curriculum 20 not Curriculum 21. The implication was, I guess, that if the medium has a born-on date older than eleven years, it deserves our skepticism.

Nevertheless, she was enthusiastic about screenplays and I couldn’t really figure it. See, I’ve written short ones and it is a weird medium. Have a look at 2010’s Academy Award-winning best original screenplay:

The camera direction. The blocking. The capitalization. The margins. None of that has anything to do with narrative. None of it is comprehensible to the average reader. None of it serves any purpose unless the screenplay eventually interacts with actors, directors, cinematographers, and so on, en route to the screen. So why, again, are we supposed to assign this idiosyncratic medium to students? Jacobs took the question for granted.

Ditto iOS apps, for a different reason. A student can write an excellent persuasive essay about any area of her expertise without any instruction in how to use a word processor. An excellent app, on the other hand, requires much more extraneous knowledge – Objective-C, for instance, or the Javascript/HTML5/CSS stack. If Jacobs is serious about requiring apps from eighth graders, does she plan on every school offering coursework in those programming languages? And, if so, what is her plan for recruiting those CS teachers from the middle school ranks? Where does she intend to find room for those required classes in the master schedule? Or are we just assuming the students will figure out how to program iOS apps? (“Haven’t you heard, Dan? These kids don’t read instruction manuals.”) Or maybe Jacobs isn’t serious. If she isn’t serious – if she hasn’t considered even the most basic logistical implications of what she’s recommending to thousands of educators – why would she say these things?

This was, I suppose, the nut of my irritation with Heidi Hayes Jacobs’ talk. While she heaped responsibility onto the attending teachers and principals, she failed to acknowledge any for herself. What responsibility should you, a consultant, acknowledge for a ninety-minute presentation? For starters, you should acknowledge that you are a consultant giving a ninety-minute presentation. You should acknowledge, if only to yourself, that unless you’re especially vigilant you’ll always favor simple solutions, grand pronouncements, and bombasticism over the details of implementation. You should acknowledge the vast gap in responsibility between you, the consultant, and the audience members, all of whom work with children in classrooms where the constraints on the imagination are much, much tighter than they were for you when you were at your desk reading TechCrunch or Seth Godin. Just like love means never having to say you’re sorry, being a responsible presenter means never having to say you really mean what you’re about to say. 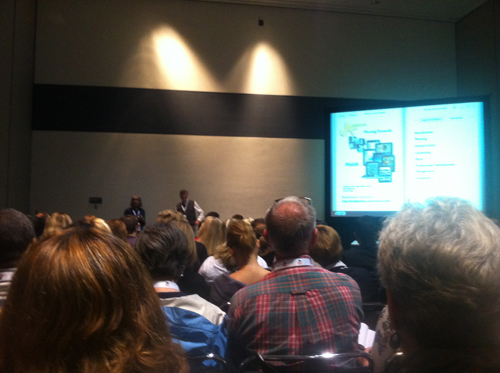 Is it a coincidence that the most effective session of the four I attended was the only one whose title wasn’t the same as a book the presenters were hawking? It has to be a coincidence.

Speaking in a much smaller room to a standing-room-only crowd, Davis and Nickerson described their district’s transition from traditional print-based curricula to iPads, iPod Touches, and predominantly digital resources. I can’t recall a single catchphrase from their talk. Instead, they described the content of the bond measures they passed, their outreach to the community, their constant attention to stakeholders within and without their school, their constant evaluation of new technology. (Here is their evaluation form.) They spoke of infrastructure – the wireless vendors that came out of the woodwork at first sign of an RFP and how the school tested each vendor by attempting to stream thirty HD movies from the same router at once. They spoke of professional development –Â how they sent new devices home with the teachers for the summer, how they involved teachers in micro-level discussions about implementation and macro-level discussions about philosophies of learning.

Their presentation wasn’t bombastic. (Bond measures!) But it was tightly organized and incredibly helpful. (Here are their slides.) They wrangled a large audience using a TodaysMeet backchannel and PollEverywhere. Their talk was extremely practical but it was impossible not to be inspired also.

[PS] Assessment   Job Posting: Google Curriculum Fellow
Unless otherwise noted, everything you and I post here is licensed
for reuse under Creative Commons Attribution 4.0 International.