27 people posted 45 photos and videos tagged #anyqs in two weeks. @colintgraham posted four, more than anybody else. The balance, so far, is 60/40 in favor of photos over video. The median length of an #anyqs video is 31 seconds.

So what are you doing with the feedback to your #anyqs entry? If you intended to represent a perplexing application of math to the world around you but the responses were mixed and the enthusiasm was low, what do you do? If you’re Lisa Henry, you revise and resubmit. 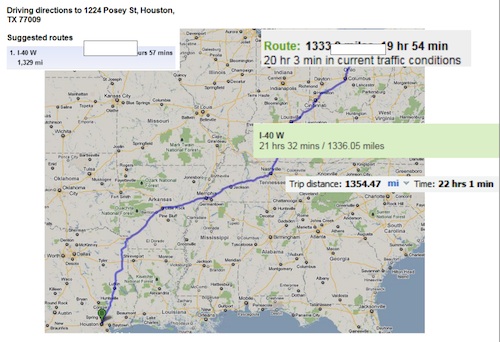 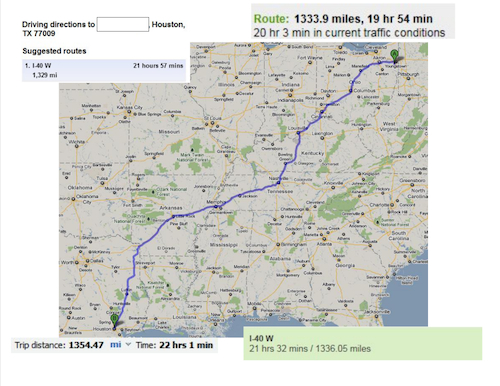 I asked her if she could clarify the context without weakening the task she had in mind. She came back with gold: 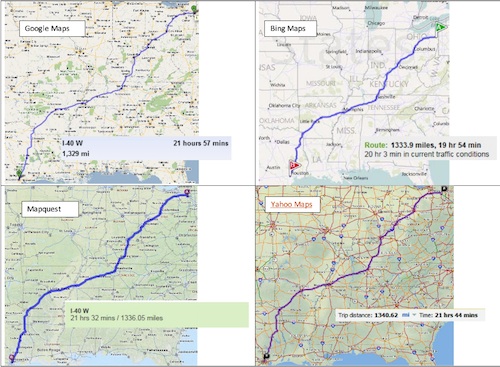 The problem space was clear to me. Four different navigation sites returned different durations for the same trip. A question now gripped me – why? – whereas earlier I was mostly confused.

See if you can spot a recurring theme in the discussion around #anyqs:

… viewers should respond with the first (mathematical) question that springs to mind.

What is the question?

That one’s easy! How many times will Griffy make it around?

what is the question?

These quotes indicate a belief that there is a right way to be curious, that students should seek out the question the teacher wants them to ask, that the question should be mathematical. I’m not suggesting that math isn’t the point of math class or that student interest should exclusively determine how you spend your class time. I’m suggesting that, given an infinite number of ways to represent a problem space, you represent it as skillfully as possible, in such a way that you can anticipate the questions your students will have about it. Conversely, if you can anticipate they won’t have any questions about it, consnider a different problem space.

Lisa Henry could have stopped with her first draft and asked her students to meet her more than halfway. She could have stood at the front of class and played the “guess what’s in the teacher’s head” game, waiting for a student to ask the “right” question. Instead, she put the burden on herself to make a stronger representation of the problem space. Her curriculum design was centered around her students, not their teacher.

Let’s say you’ve managed to anticipate the question your students will wonder about your photo or video. (Plenty difficult on its own.) How can you help them answer it? Have you gathered the information your students will need for the second act? Have you recorded an answer to the question, something you can reveal in the third act to pay off on all their hard work from the second? If you’re looking for a harder challenge than #anyqs, that’s it right there.

To what extent is the response of math teachers on Twitter to these photos and videos a useful proxy for the responses of our students? If a bunch of math teachers wonder, “how many dolls are inside?” does that mean that students will also? If teachers don’t wonder that question does that mean that students won’t? Is there a better way to test out curriculum design this quickly and easily?

Pam Grossman, my adviser, at a panel discussing teacher education:

Classrooms are somewhat unforgiving places to learn to teach.

Problem posing is a core practice of math teaching but the classroom is an unforgiving place to learn it. When you pose a problem in class, you’re betting a lot of time and motivation from a lot of students against the possibility you totally misjudged the task. When you pose a problem on Twitter to your teacher buddies, that risk drops to zero. I hope #anyqs proves itself a useful exercise of classroom practice that doesn’t require a classroom. There aren’t a lot of those. We’ll see. I only know that this exercise is most productive when we submit each new photo or video with the perspective that “this is just a first draft – I will be revising this.”

I’m doing some work in Singapore this week. I have a couple of items set to auto-post but my commenting will be light. Real talk, though: if I come home and there isn’t a pile of Graphing Stories waiting for me to edit, you are all in big, big trouble.

Graphing Stories I Want You To Make For Me   For The Next Ten Days Only: Create Your Own Graphing Story At GraphingStories.com
Unless otherwise noted, everything you and I post here is licensed
for reuse under Creative Commons Attribution 4.0 International.