A Train Leaves Chicago Traveling At Who Cares?

Here is a basic assumption of my recent work, put as concisely as I can:

Even an application problem as stereotypically and quintessentially lame as the one above can become a powerful testimonial to math’s presence in the world if the problem begins and ends with an accurate representation of itself. Which is to say, in this case, if it starts with a side-by-side video of the two trains leaving their stations that continues unbroken until they meet each other. 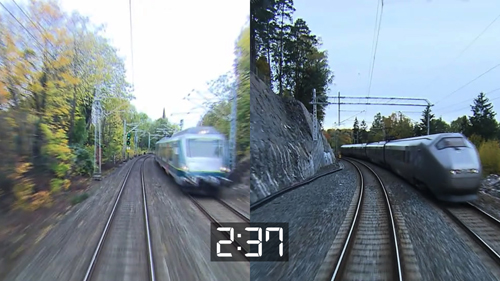 If anyone’s been looking for an invitation to take a whack at that assumption, consider yourself invited.

Aside: The problem with paper is that it accurately represents a lot of things, but the world isn’t one of them. Not at the kind of fidelity your students need, anyway.

A Train Leaves Chicago Traveling At Who Cares, Ctd.   [3ACTS] Pyramid Of Pennies
Unless otherwise noted, everything you and I post here is licensed
for reuse under Creative Commons Attribution 4.0 International.