Which area value has the most possible perimeters?

This is the sort of thing that keeps me up at night.

Draw a shape on squared paper and plot a point to show its perimeter and area. Which points on the grid represent squares, rectangles, etc. Draw a shape that may be represented by the point (4, 12) or (12, 4). Find all the “impossible” points. 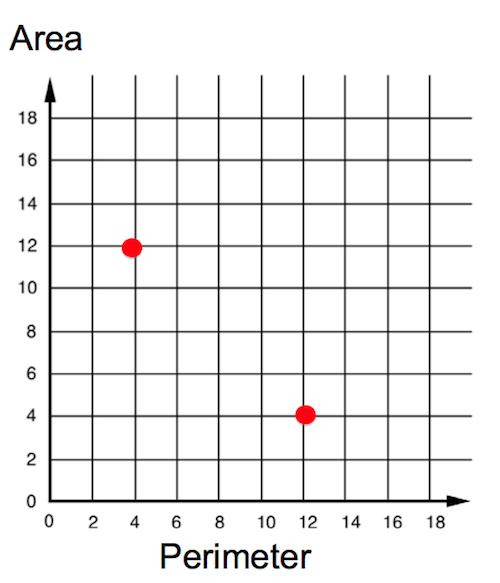 I like this problem a lot (I’ll spoil some of the fun in the comments) even though it’s fundamentally dissimilar to most of the problems I write about here.

One of the best parts about my working life right now, including grad school and my work with publishers, is my daily exposure to the vast set of answers to the question, “What makes for good math education?” That exposure has helped me find the edges of the usefulness of my own answer to that question, one which I’ve been developing for years, and for that I’m grateful. There’s nothing more pathetic than walking around convinced you’ve found the answer, forcing yourself to perceive other answers as either inferior to or derivative of your own, missing out on the bigness of the work of math education, on its richness and difficulty. Realizing the smallness of my own work relative to the whole has made me a much happier worker. That’s the odd thing.

So I’m grateful to instructors like Labaree and Stevens who urged us all to quit trying to solve the problem and focus first on describing the domain of the problem and its range of solutions. With that focus, I started to see fundamental similarities between this problem above and other problems I like.

Let me close with a tweet from David Cox, a math teacher who also gives a damn about design.

Infographic: When Am I Going To Use This

2011 Oct 25: The action on Twitter indicates that few people are looking past the infographic itself before mashing the retweet button so let me put this out in front: I think it’s a losing game to share this image with math students.

Another day, another provider of online degrees looking to boost their PageRank by trading some trinket for a link. (Link responsibly.) In this case, we have an infographic from Rasumussen College. Click for larger. 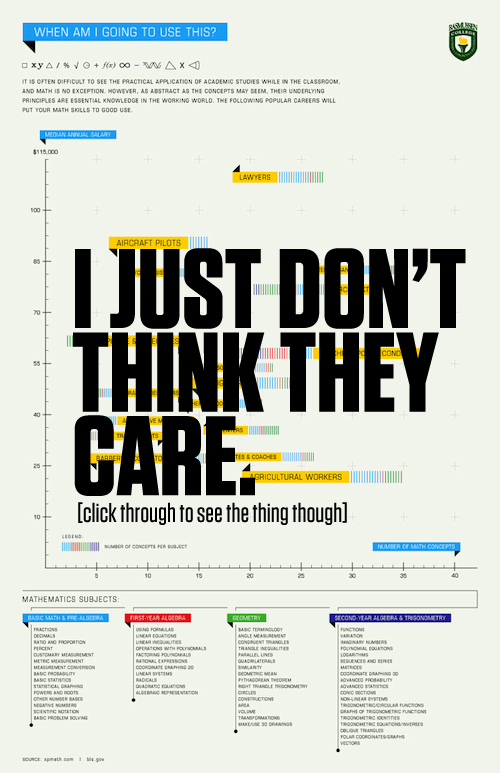 A couple of quick ones on this:

Why complicate things? My favorite reason to do math is fun. Seriously. Make that your premise and prove it throughout the year.

A separate thread for what is probably the most depressing and least consequential outcome of my Public Relations post: is this a parabola or a catenary? Discuss!

It’s interesting that everybody seems to assume that NCTM overlooks this issue…. The companion sheet [pdf] could do with some improvements, but at least it looks at the catenary question.

I’m trying to remember when I was 12 how I would react to We Use Math.

I was in New York last month consulting on a project intent on improving students’ perception of mathematics. We were spitballing around the table when someone pulled up this poster which was designed by NCTM:

Everyone in the room fawned over it, myself included. Then I pulled up this photo on my iPad. I said I found the differences between the two images provocative. One person said, “Right. Basketball. Kids like basketball more than bridges.”

Let’s look at We Use Math, a project triple-teamed by Brigham Young University, the Mathematical Association of America, and the American Mathematical Society. Clearly that consortium brought a lot of resources to the table. The site features polished quotations from happy and well-paid professionals testifying to the usefulness of math in their careers. There’s a career tracker which lists dozens of high-paying careers, their salaries, their employers, the math required, and the ways math is used. Here’s the flyer for chemists [PDF], for instance. There’s stock photography of pretty people who (presumably) also use math, as well as a T-shirt store. 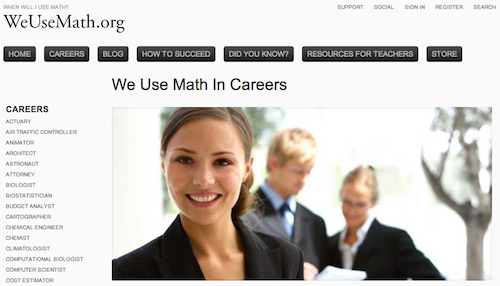 Engagement is a funny, fickle thing. On the subject of how to excite children about math in the same way it excites me, I have more questions than answers. Let me try to lay out a few markers, though:

Venturing out farther on the creaky limb of engagement, here is some advice I give myself:

Perhaps it comes to this: rather than remembering your own tastes as a twelve-year-old, empathize with the tastes of a twelve-year-old who isn’t anything like you, one who has experienced only humiliation and failure in mathematics. What does math have to offer that student?

BTW: Here are three more PR projects. I like the odds on one of them way more than the other two.

2011 Oct 21. Great piece from Jason Buell on the extremely variable and personal definitions of “real world.”

But another approach – since you used the word “enjoy” – is to simply consider math as an opportunity for puzzle-solving in interesting ways. After all, there is virtually NOTHING “personally relevant” in many of the games and pursuits people find so compelling, like, for example, Sudoku. Even chess. Or Angry Birds. Whether math is useful/relevant RIGHT NOW is a worthy and challenging goal.