At the NCTM Institute last month, we broke into task groups to discuss reasoning and sensemaking (the conference themes) in content focus groups. I slipped into Geometry a little late and found a seat. The group was discussing approaches to this problem: 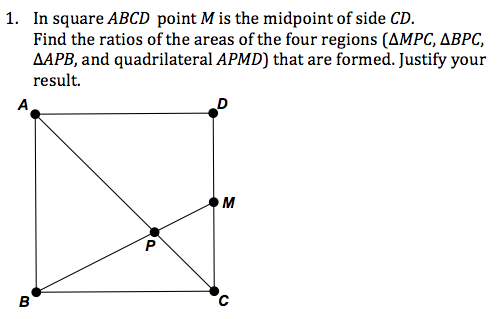 This was the session immediately following my keynote and the difference between the tasks I had described and the task they had just finished was stark. Someone asked, “How would we apply Dan Meyer’s approach to this problem?”

It isn’t fair. It’s apples and oranges. Paper is a great medium for a lot of math problems. Paper is a terrible medium for representing how people apply math to the world outside the math classroom. My techniques for one problem type have limited use for the other. My enthusiasm for one problem type shouldn’t be mistaken for a lack of enthusiasm for the other.

That said, I don’t find myself terribly enthusiastic when I think about assigning this problem to Geometry classes I have taught. As a challenge problem or extra credit, sure, but in its current form – with the abstract mathematical language and symbology smacking you right in the face – students are going to wonder, “Who comes up with these problems, seriously?”

If we make a better first act, though, we can engage, I dunno, 17.2% more students without any cost to the math. That’s empirical, friend.

Some Really Obscure Geometry Problem from Dan Meyer on Vimeo.

Watch the video. Basically, we’re applying pressure to their confidence, which is how I try to approach pure math problems. Start from what they know. Then mess with it in some trivial way (eg. we just dragged the endpoint down a little) that requires math that is anything but trivial.

You and your students will begin to find it very difficult to talk about all these different segments and regions without labels. So add them. A recurring point around here is that if you want to disengage a lot of students who might otherwise be engaged in the math, simply start the problem with as much abstraction as possible. If you want to engage those students, don’t introduce that abstraction until students know why they should care about it.

You’ve been walking around and taking note of different solution strategies, right? Have students come up and explain those different strategies. Then show use this Geogebra applet to show the percentages changing, in case anyone still needs convincing.

Suppose M cuts side CD so that MD = n – CM. What are the ratios of the areas of the four regions?

Send n to infinity and watch the fireworks.

Again, though: print-based media require you to keep everything on the same page – the sequels in the same visual space as the original problem. I realize that math teachers by natureÂ don’t mind that. Do students?

J Michael Shaughnessy, President of the National Council of Teachers of Mathematics and designer of the problem under discussion in this post:

Not all math problems have to be posed everytime in a a high tech environment. Sure, it’s ‘cooler’ that way, but i completely disagree with your comment on this one, about ‘how the problem was posed.’ It’s only boring in the beholder’s eyes, depends on how it’s pitched to a group.

I met Greg Schwanbeck at Apple Distinguished Educator sleepaway camp last month. He teaches science. I teach math. We set those differences aside and found a connection. I use multimedia in my curriculum. Greg uses video for assessment in a way I found compelling.

Let’s say he wants to assess the impulse-momentum theorem, which is the theorem that explains why boxers roll with punches rather than against them. ie. If you double the duration of the impact, you halve its force. (Cut me some slack here, science-buds. Everybody knows I have no idea what I’m talking about.)

He gave me permission to share with you three versions of the same assessment of a student’s understanding of the impulse-momentum theorem. Let me invite you to assess the assessments in the comments. List some advantages and disadvantages. Ask yourself, “What is each option really assessing?” Greg will be along shortly to offer his own commentary and to assess your assessment of the assessments.

A stuntman jumps off of the top of a crane extended high up in the air. Below him is an airbag–a large inflatable cushion that has a thickness of 3 meters. When the stuntman comes into contact with the airbag, the impact deflates the airbag over a period of time, compressing the airbag from 3 meters thick to 0 meters thick while slowing him down to a stop. Explain, making reference to the impulse momentum theorem, why the stuntman is able to survive.

Explain, making reference to the impulse momentum theorem, why the stuntman is able to survive the jump.

When I’m designing digital math tasks, I feel the most ridiculous when I fire up Adobe AfterEffects – a special-effects juggernaut – to lay a simple timer over some footage for the second act.

Here’s a neat hack if all you have is Keynote or PowerPoint.

Now when you play your slideshow you just click and the timer starts. Click it again and it stops. One caveat: this timer won’t do you any good if your video is slow or fast. It’s calibrated for 29.97 frames per second, which is what comes off most consumer cameras. Here’s an example of the effect in Keynote:

Drop me a line in the comments if you wind up using this.

BTW: Alternately, you could have your students get their own measurements using their phones for timers. That one’s nice because the answers spread across the measurement error a little bit. Everyone owns a slightly different answer.

BTW: I’ll be traveling over the next three weeks. My intern, Giuseppe, will be posting material for me throughout my absence and I’ll check in with the comments when I’m back.

I’d been waiting to mention it until after we finished negotiating our long-term contract but I’ve been on a short-term contract long enough to feel icky writing about the publishing industry without disclosing that it keeps the lights on at Meyer Manor.

I don’t check the imprint before I criticize a textbook. Pearson basically owns all of them anyway and since they’re all printed on paper, they all share some of the same fundamental flaws. In any case, no one I work with has ever sent me a note asking me to back off. They hired me because of my opinions on curriculum design, not in spite of them.

Those are the basics, the essential disclosure. If you feel invested in my story, though, here are some more personal details including a) how the offer came up, b) why I picked this project, and c) what it all means for the curricula I post here:

How the offer came up

I don’t like to think or talk about how drastically a single 11-minute talk altered my professional landscape. I remember talking to The Jose Vilson afterwards. He was really kind about the talk and I was like, “Yeah, but this isn’t anything I haven’t written about a million times, right?” I’m still befuddled by the reception, so I’ve been treating every workshop I’ve been asked to facilitate, every talk I’ve been asked to give, and every person who’s asked to meet up with me, as if it’s the last one ever. TEDxNYED put a gust of wind in my professional sails and for that I probably owe David Bill a Christmas ham for the rest of his life, but I am trying hard not to squander that momentum and stagnate.

Having called out the publishing industry in front of what is now, in the YouTube era, a very large stadium, I was equally befuddled by the reception from editors. I took calls and meetings with the three majors and several smaller imprints. They all expressed awareness of a problem. In many cases, the problem they were aware of was “the industry is bleeding and digital is coming after us like a shark.” Meanwhile, the problem that interests me is “print media makes math applications boring and hard for students.” Still, it seemed like we could help each other out.

A reader asked in an e-mail about the irony of going to work for an industry I criticize. I replied that I didn’t see the irony. “They’re hiring me to fix things I don’t like about their product,” I said.

Why I picked this project

There were several interesting offers but time is short and I’m still enrolled in a very challenging doctoral program so I took on the Pearson project for several reasons:

Those are the biggest reasons.

What it all means for the curricula I post here

Currently I license all my writing and curricula CC-BY which means anyone can do anything with it (including sell it) so long as my name is attached. The terms of the licensing of my work to Pearson are still under negotiation but I don’t want to do work I can’t write about or share freely here. So I’m offering Pearson an exclusive commercial license for my tasks. I’ll still make those tasks freely available to you but they’ll be licensed CC-BY-NC, which means no one but Pearson can use them commercially. I hired an attorney to protect those particular interests.

The biggest difference, I suspect, will be more math problems and better math problems. I’ve had to upgrade the Flip camera and the point-and-shoot and I have to make a lot more tasks now. Fingers crossed. Hopefully we’re all walking away winners here.

Notes From The Road

By Dan Meyer • August 1, 2011 • 5 Comments
Unless otherwise noted, everything you and I post here is licensed
for reuse under Creative Commons Attribution 4.0 International.