It Isn’t (All) The Publishers’ Fault

I gave the opening talk at NCTM’s High School Institute yesterday in Orlando, FL. At the end, a man introduced himself as a teacher and former textbook editor and set me straight on a couple of things:

Publishers respond to market pressure from teachers who are responding to a similar kind of market pressure from students. I have arrived at very different responses to the same pressure. (ie. Does anyone really think students are engaged by the cartoony nonsense they find in the margins of their books?) Making myself the best advocate I can be for those responses is, of course, the challenge.

BTW: Lisa Henry posted a detailed review of my keynote. I want to highlight her remark about the #anyqs project:

I am finding more and more math around me. It pokes in my head when I least expect it.

I heard this in Grand Forks, also. The #anyqs exercise seems to be genuinely transformative for at least some teachers. Whether that transformation results in any kind of significant change in student achievement or in the disposition of their classes is an open question.

10:00AM PDT. It should be fun. If you can’t make it, Apple is archiving it and I’ll post the link later.

2011 Aug 28: You can access the webcast at this link. I’m the second speaker. I also contributed two tutorial: “Analytic Geometry” and “Mathematical Storytelling.”

Seriously. You can’t afford to be this naive any longer. That “award” certifying you as a really super X-brand teacher, that free conference registration- these are not things they do for you out of kindness1. This is for them. Every single bit of it, bought and paid for. Their return on investment is pre-calculated. If it didn’t make them money, they would not do it.

Posted from Phoenix in a hotel ballroom with other Apple Distinguished Educators while listening to Apple Retail Market Leader Christina Sanchez (Arizona / New Mexico) sell us on selling our students on a career selling Apple products.

The Three Acts Of A (Lousy) Mathematical Story 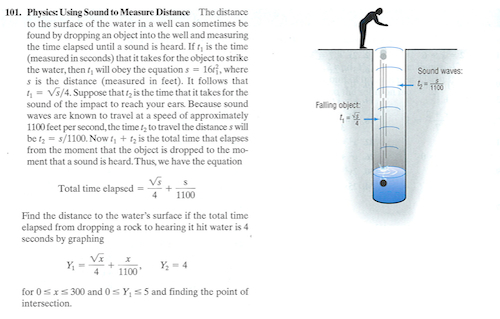 This is one of the most tragic math problems I’ve ever seen. (Click for larger.) Not because it’s awful, though it is, but because the awfulness conceals something amazing. I mean, how great is it that we can drop a rock in a well and the sound of the splash tells us how deep the well is. That’s wizardry!

I find it completely amazing we get to offer that power to our students. If my goal were to conceal that amazingness, though, to ensure my students would be less interested in mathematical wizardry thanks to my efforts, I’m not sure I could do any better than this problem. 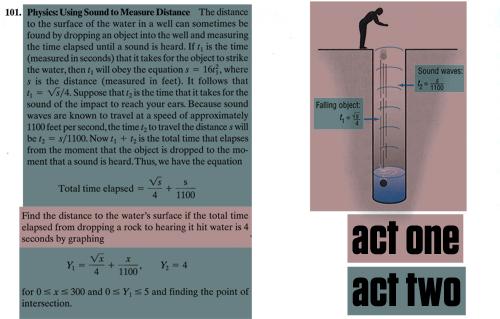 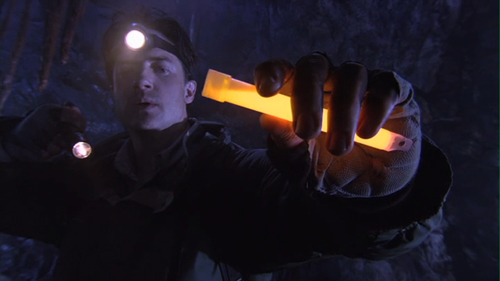 It turns out that Hollywood occasionally makes math problems for us. Click through and have a look.

With Brendan Fraser, you get a fun check on your own answer and an explanation of why his team even cares how deep the cave is. With the Descent team, you get a much deeper cave and a stronger separation between the first and second acts. Both represent massive improvements over our status quo.

To be clear, I’m not saying you can just play act one and two and your students will trot merrily to an answer in act three, deriving that thorny equation for projectile motion all on their own while stopping periodically to smell the constructivism flowers. I’m not saying that. This problem is tricky and will likely require lots of help on your part. What I’m saying for sure is that it makes no sense to offer that mountainous paragraph of helpful text without your students knowing (to say nothing of caring) why you’re offering it.

Zac Shiner, derelict blogger, and Shira Helft, a fellow graduate from Stanford’s new math teacher cohort last year, have a great list of questions running at Building Our Classroom they’ll be taking on over the course of the summer. Zac elaborates at his blog:

Even though it’s the middle of summer, my job as a teacher seems to be unavoidable in my day to day life. I’m not just talking about the unavoidable questions of “so what do you do for a living,” but the places my mind drifts to when I have nothing else to think about. During silences in conversations, or when I close my eyes at the end of the day thoughts of my soon to be classroom are constantly filling my mind.