With Interactive Exploration of a Dynamical System earlier this month and today’s Scrubbing Calculator, Bret Victor is doing some of the most provocative work in math education right now. As much as I’m curious how STEM educators perceive his work, I admit I’m much more interested in the perceptions of educators in the humanities and of people who, at one point or another, were totally put off by the abstract symbology of mathematics.

If our goal is to empower students to do more and more interesting mathematics, we can’t just hand them simulators and tell them to go play: we need to teach them how to create those simulators. Doing that requires a lot of math and a lot of programming. So Victor’s “simulation” model of doing math ultimately requires teaching kids a lot of traditional mathematics.

Of course, replace “simulators” with “calculators” and we have another familiar argument. Obviously, I’m of two very different minds about this.

Frameworks are inherently limiting. The more guidelines you specify, the more material you exclude, some of which can be very good. Frameworks are great, though, because they make implementation easy. I know what happens in the first, second, and third acts of a mathematical story, so it’d be a simple matter to use Dan Anderson’s lesson in the classroom – no lesson plan or handout required. 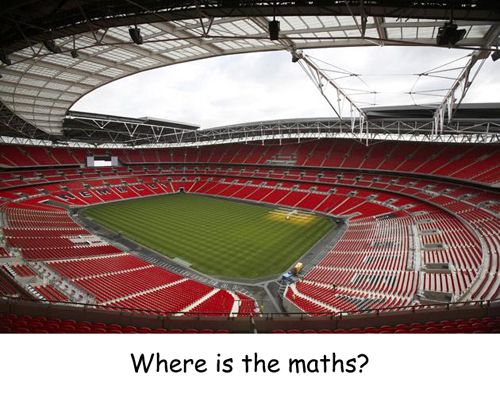 The teacher put up this photo at the start of class and asked her students, “Where’s the maths in this picture?” She asked them to discuss the question in their groups while she took attendance. After four minutes, she pulled them back together and asked a student from each group to tell her where they found the maths in Wembley Stadium.

“The amount of seats,” one student said.

“Area and perimeter,” said another student.

“The number of seats,” said a third student.

“We already have the number of seats,” said the teacher.

The student tried again. “The, uh, perimeter … of the lines.”

The teacher pressed a little – what lines? what perimeter? – and then accepted it.

After two more groups, a girl named Sarah said something I can’t quite make out on the video, but the teacher was visibly floored.

“Have you read my lesson plan?!” she said. “Because that is very, very spooky. Because what we’re actually going to look at today is based on what Sarah just said. I’m a little bit … that’s very odd … but good stuff.”

What I’m suggesting with #anyqs and my last post is that:

There’s a big fault with this sort of question that you didn’t mention: students start skipping the mathematics altogether and try to determine what it is the teacher wants them to say. It’s the equivalent of the teacher asking “What number am I thinking of?” then waiting for a bunch of answers. It’s a totally different game, decidedly not math, and not even close to good inquiry-based teaching. Such questions should either be clarified or just not asked in the first place.

Graphing Stories I Want You To Make For Me

Y’all have five days left to film fifteen seconds of video, make a graph, and upload them to Graphing Stories. Here’s my wish list:

Add yours to the comments. Better yet, make it and submit it!