This Has Come Up A Lot Lately 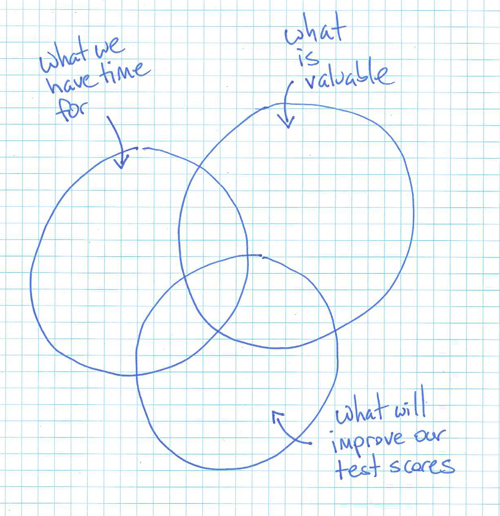 I have received more criticism of my curriculum design theories in the last four months than I have in the last four years combined. Much of it has been useful, especially insofar as I’m able to notice common questions and then formulate clear responses. If I’m then able to summarize those responses visually, all that’s left is for me to track down those critics one by one and shake their hands.

I imagine the questions that led to the panel above are self-evident. The answers are tricky, but I’m grateful, at least, that they now have a frame.

BTW: Add Michelle Bullard to the list of Commenters I Wish Would Just Get A Blog Already. Her response is pretty wonderful:

I think that students who can turn problems inside out like that, from concept to detailed numbers rather than from numbers to concept, can’t fail to pass any standardized test, but I really don’t care whether they do or not.

We Had Too Much Time On Our Hands   Waiting For Superman Trailer
Unless otherwise noted, everything you and I post here is licensed
for reuse under Creative Commons Attribution 4.0 International.