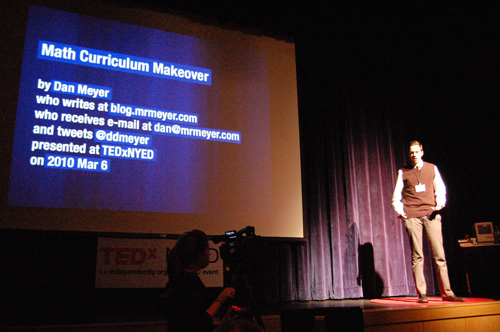 I’m obliged to David Bill, et al., for their meticulous planning and execution, for sponsoring my first trip to New York (where I also got to meet up with my twin sister in her East Village environs), and for the opportunity to meet a bunch of cool educators I had only previously known online.

A lot of my co-presenters seemed previously acquainted or at least familiar with each other through similar conference and/or higher-ed circles. As the proprietor of a mid-shelf edublog, I found this intimidating and was grateful for the explicit welcome (especially) from George Siemens and David Wiley, who both treated me like I was anybody else in that bunch of pedigrees.

Some of these people presented without slides. Some said that they hadn’t yet finalized the content of their talks. This was the day before the event, which seemed awesome to me. At this point, I can’t give a ten-minute talk without spending two weeks on slides and two weeks rehearsing in front of a bathroom mirror. Someday. Maybe.

These slides won’t be comprehensible without the audio, which is as it should be, in my opinion, if you’re playing to the strengths of both mediums. I’ll be sure to post the video of my bit once the TEDxNYED A/V club finishes its work.

You’ll hear a lot of people describe their TEDxNYED experience as some kind of overwhelming epileptic fit, an inspiring but exhausting experience.

I relate. This isn’t particular, by any means, to TEDxNYED, but at any forward-looking education conference, I tend to follow a predictable (and fast) trajectory from inspired to exhausted to irritated.

Speaker by speaker, it was true that the farther removed you were from the daily grind of public K12 classroom teaching, the less restrained you felt to critique and condemn it.

This saw its apex in Jeff Jarvis’ eighteen self-gratifying minutes, which began with his remark that “This is bullshit.” (referring to the TEDxNYED format in particular and public education in general) and climaxed with “Fuck the SATs.”

I was grateful to presenters who recognized, contra Jarvis, that they were addressing an idealistic crowd already in an agitated state. Those speakers modulated their remarks to a lower frequency both to avoid pandering to their audience but also, in some exceptional cases, to challenge assumptions the majority of the audience clearly held. George Siemens, in particular, devoted four of his eighteen minutes to an off-the-cuff rebuttal of Jarvis’ remarks, specifically cautioning the crowd that “the solutions to the problems of education are starting to concern me more than the problems themselves.” Basically, I’m unimpressed by presenters who throw chum in the water when fish are already leaping into the boat.

Among others, I’m talking about:

I’m not saying that the only people capable of describing or critiquing classroom teaching are classroom teachers. There are people who don’t work in a classroom who know a lot more about my business than I do. I’m saying it’s difficult, as one of public education’s foot soldiers, to do much with inspiration. I don’t have many places to put inspiration, certainly not as many as the edtechnologists walking away from TEDxNYED minds buzzing, faces aglow, and so it tends to settle and coagulate around my bile duct. It’s too hard to forget that tomorrow I and three million others will have to teach too many standards of too little quality to too many students with too few resources. What can you do with this?

[BTW: These photos are courtesy of Kevin Jarrett.]

Easy. Fun. Free.   TEDxNYED
Unless otherwise noted, everything you and I post here is licensed
for reuse under Creative Commons Attribution 4.0 International.