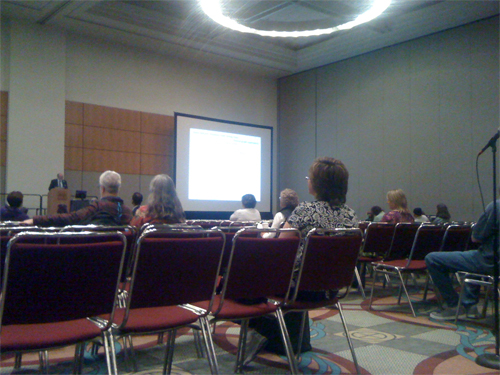 In order to teach a lot of calculus quickly to a lot of college freshmen, Don Saari gave them the Kathy Sierra experience: he made them “feel like they invented calculus.”

Saari said that “when you get them to invent the ideas, they blaze through. They own the ideas.” And even if their invented ideas aren’t perfectly formal (ie. “the slice-and-add method” instead of “rectangular approximation to integrals”) it turns out to be a fairly trivial task to adjust their naming conventions once they have that firm conceptual grasp. (cf. Tom Sallee’s session from CMC-North 2007.)

… And Much More Accessible

Leinwand modulated his earlier remarks nicely from a crowd of supervisors to a crowd of teachers — many more charts, data, and citations in his session with the former; a pep rally grounded in examples of classroom practice with the latter.

The imperative was the same in both, though: “Empower the species. Give them access to math.”

I’ve attended more sessions on problem-solving this week than I can count and, if you’re looking for the most-mentioned, highest-yield technique, here it is:

That’s it. If a student comes up with a method for solving a problem that’s functional but outside the scope of your plan, let the plan go. Bring that student to the front of the class to explain her method and throw all kinds of enthusiasm at her.

The only prerequisite for this kind of teaching is the release of a certain kind of personal insecurity that has no business in education anyway. You won’t miss it. There are few downsides here. Like my companion said, “Do we still need to tell this to teachers?”

Leinwand put this shot over the net with some nice topspin:

We [the US] need innovation. Who’s going to innovate but the kids who look at things differently. If we continue to teach math the way we have taught it, we will continue to do right by the same thirty kids who think like nerds.

It’s even better to put students in a place where non-standard solutions aren’t just appreciated, but inevitable. Here’s one of Leinwand’s examples. Let’s say you want to chat about subtracting whole numbers.

Sunil has 73 marbles. Jacinda has 63. How many more marbles does Sunil have than Jacinda.

And when someone tells you (among a bunch of other fun facts you didn’t anticipate) that 73 is ten more than 63, ask your students to convince you.

Bonus Steve-ism: “Estimation, number sense, and guess-and-check are the coin of the realm.”

Leinwand didn’t address this at all. Neither did the SFSU professors in the rich problems session yesterday. Saari brought it up at the end of his session as people were starting to filter out. “I’m not saying this is easy,” Saari said. “It takes awhile to adopt this approach.”

Suffice it to say I would’ve stuck around for another sixty minutes if he had decided to elaborate on that casual disclaimer.

Not that you asked but I think one of the largest challenges facing a new teacher is to establish certain practical habits such that her entire life becomes an ongoing 24/7/365 exercise in curriculum development.

Why do it to yourself?

Because high-achieving, curious, capable students always, for whatever reason, seem to study with those teachers. Because that lifestyle will turn your classroom teaching into a daily act of creative expression, “a personal delight,” as Saari put it. Because it’s incumbent on human beings to live lives of fascination and to share that fascination with others.

NCTM 2010 â€” Day Two   NCSM 2010 â€” Day Three
Unless otherwise noted, everything you and I post here is licensed
for reuse under Creative Commons Attribution 4.0 International.