I decided against the typical liveblog fragments here. I took some time, instead, to synthesize the major events and themes of NCSM (for math supervisors) and NCTM (for math teachers) so they’ll be more useful to me later. If you’d like me to elaborate on anything I cut short, just let me know in the comments. This delay has also given me time to request supplements from presenters (slidedecks, works cited, handouts) and link them here.

The Norms Are The Same 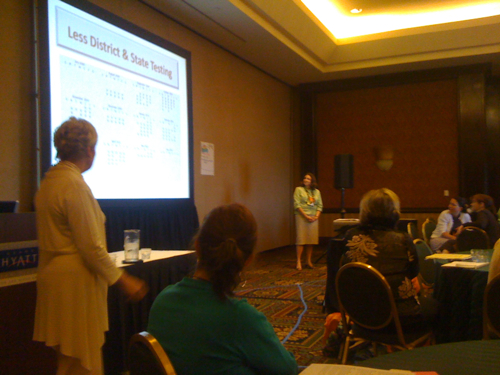 I’m adjusting to new naming conventions at this conference. The term “teacher” refers to (variously) a teacher supervisor, a math coach, or, more traditionally, a teacher of math students. I have found it extremely useful to simply stop caring about the difference.

We are learners and everyone in our community is a learner. We’re excited to be here learning. This is what has kept us strong.

That was how the first speaker opened up. She then listed the three norms of her session:

The Norms Are Different

My favorite sessions today addressed the question: how do you talk to teachers about their teaching?

If you asked me that question before NCSM, after having blogged for four years (fairly) openly about my practice, I would have answered “you just talk about it!” This kind of well-intentioned-bull-in-a-chinashop approach was implicitly frowned upon by everybody. One of my table buddies even clucked over the discussion question, “what would you have done differently with that lesson?”

“You don’t ask teachers that question,” he said. Everyone else nodded.

I saw this again in the session on video clubs, where the norms were explicit and intense. You do not simply throw some teachers in a room and a video on the wall and tell them to talk about it.

And when you’re discussing the clip, make sure your comments are respectful of the teacher but also of the students. Do not evaluate the teacher or the lesson. Evaluate instead what the students understand. Always cite evidence from the video.

Comments of the form “I would have done [x].” are discouraged whereas comments like “I noticed [x] and I wonder if doing [y] would have resulted in [z].” are tolerated. Barely. Just watch yourself, okay?

The norms are printed and distributed to everybody. The speakers noted how uncomfortable everyone becomes whenever a newcomer joins the group and starts tromping all over this shared code. Imagine someone who doesn’t understand that the library is a place where silence is an expectation.

A large part of me wants to urge teachers to just get over all of this, to convince them this job is too difficult and too important, that we all have too much to learn to get hung up on our feelings. But check it out: the club has been running for seven years; there is little turnover; it has only grown; and its teachers are becoming huge and powerful. All of this recommends staying (at least a little) hung up on feelings.

My mind wandered, as it does twelve times a session here, to a) the internet and b) the lack of equity for teachers who can’t attend that video club and c) how (a) could render (b) totally insignificant. 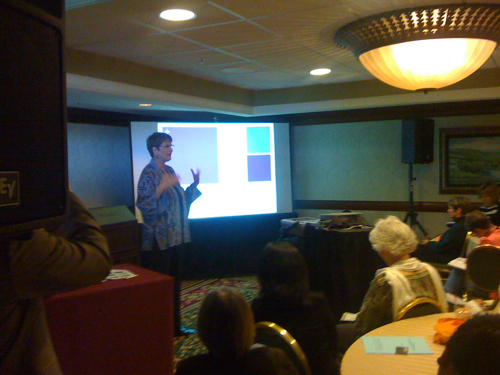 You had one hundred people in the room and eighty people trying to get in. The speakers had to give up their chairs and sit on the floor.

Clearly, this is a crowd-pleaser, and something you ought to think about for your own conference. (Huge props to CMC-North, my regional math conference, for picking up the format for their next conference.) The investment is negligible and the upside is huge.

Brief recaps follow. All the talks are available (or will be soon) here.

NCSM 2010 â€” Day Two   What You Can Expect From This Blog For The Next Week
Unless otherwise noted, everything you and I post here is licensed
for reuse under Creative Commons Attribution 4.0 International.