Houston Independent School District is huge. It won a huge grant and has a huge video production department. It created an impressive DVD of impressive practices in Algebra I and the teachers who participated in that reflection program improved impressively.

I have nothing but good things to say about the presenters, their content, and their presentation of their content. But if you believe as I do that classroom transparency is our mandate as teachers, that when you share what you do it will inevitably change what I do (even if I’m only learning from your counter-example), your questions should be the same as mine:

Those questions weren’t addressed. Which was fine. It wasn’t my session. Nonetheless.

The presenter, Annie Fetter, has been creating Problems of the Week for the Math Forum since 1993. She’s reviewed thousands of student responses in that time and she now models problem-solving techniques for other teachers in their classrooms. There was one mortifying moment in the session and a whole lot of great ones.

Those commands are meaningless if the student doesn’t understand the problem. (ie. the word “more” can indicate addition or subtraction, depending on the context.) So Fetter asks students instead to read a problem and complete the statements a) “I notice …” and b) “I wonder ….”

She workshopped the process with this problem:

Greta has a vegetable garden. She sells her extra produce at the local Farmer’s Market. One Saturday she sold $200 worth of vegetables — peppers, squash, tomatoes, and corn.

You know where this went for me.

Honest to god I tried to stay cool. I asked my table buddies, “Is this problem contrived? Is there a more natural way to teach systems of equations?” The guy across from me just glared back like I had said something derogatory about his mother.

When it came time to share our noticings and wonderings, I said, “I’m wondering how Greta knows how much she made in total but she doesn’t know how much she made on peppers, squash, tomatoes, or corn. Like, what went wrong with her bookkeeping there.”

Fetter said in all good humor, “Well, sure. I mean, this is a math problem.”

That sort of response triggers my instinct for self-preservation. I start looking for a desk to duck beneath. If I pitched that response to my students, they’d already have their knives out, sharpened, and thrown.

Is there a situation where it makes sense to use systems? Did mathematicians develop systems because they makes life easier, more fun, or more meaningful? Or are they just arbitrary symbology we use to limit access to universities?

I’m glad I stayed. Her strategies for drawing students into conversation, for appealing to and strengthening their intuition, for encouraging patient problem solving were excellent. A few highlights:

All of which is great. But all of that requires rich mathematics. You can’t throw a piece of lumpy charcoal (see Greta’s garden above) on a student’s desk and ask her, “What do you notice? What do you wonder?” 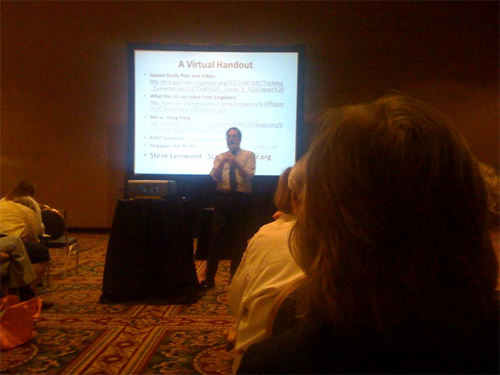 Steve Leinwand is a young up-and-comer, a researcher at AIR who spits hot fire on the track, and deserves his own section heading. If you get a chance to hear him speak on anything, take it. I can put the dy/dan stamp on three guarantees:

In particular, he has an encyclopedic knowledge of the content standards and assessment questions of countries in the East and the West. He noted right away the irony of totalitarian eastern countries assessing their students more constructively than their democratic counterparts in the West.

For instance, a sample first-grade assessment in China:

And one from the third-grade:

Estimate the number of characters contained in one whole page of a newspaper.

The most interesting aspects of his presentation, then, compared assessments of similar standards between the different countries. The only people who would dispute the inferiority of ours to theirs, Steve suggested, were “tired, old, white men who still told time with analog watches.” (One got the sense here that Steve was doing his damnedest not to name names.) 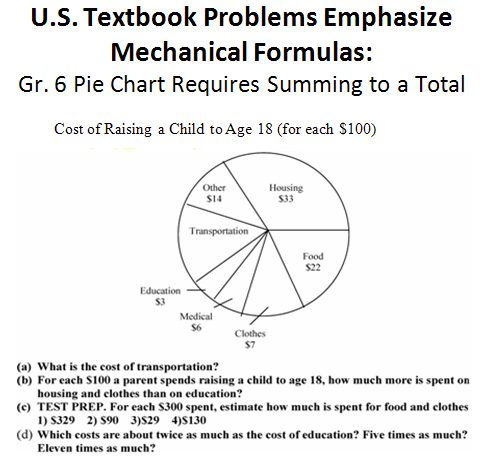 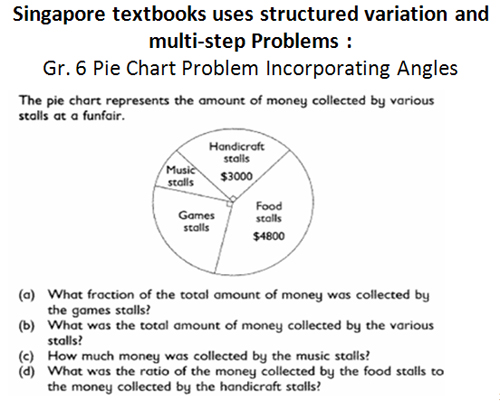 He noted the inequities in models of teacher development between the East and West that made adopting the eastern model of student instruction difficult. In Korea, for instance, the ratio of teacher salary after fifteen years to GDP per capita is 2.5. 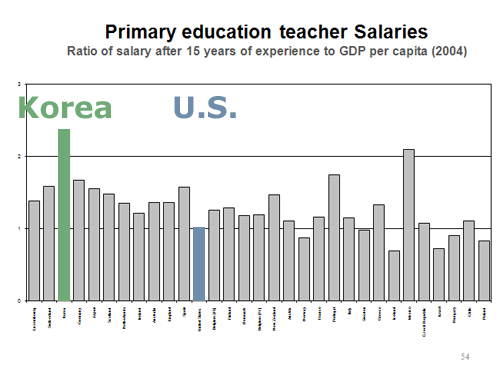 The Chinese, meanwhile, apply a model to teacher training that looks suspiciously like medical residency. 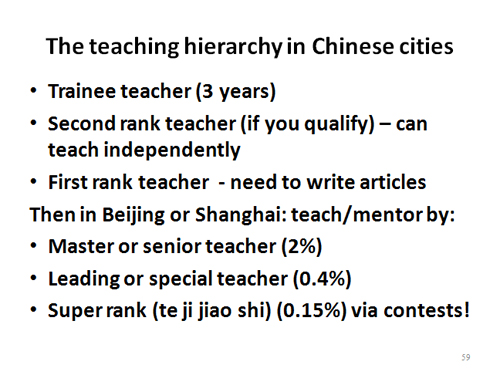 Final Steve-ism: “We do the same thing [at these conferences] we don’t want our kids to do: we sit, we get, and we forget.”

Math supervisors from California, Washington, Oregon, and Hawaii gathered together in a room to update each other on old and new business. We stood one-at-a-time and introduced ourselves.

Aw screwit, I thought, and went there: “I’m Dan Meyer. I’m a high school math teacher and I blog.”

Caucuses strike me as a relic of an age when you couldn’t e-mail or otherwise connect instantaneously with your long-distance colleagues. I’m not saying they aren’t useful or even fun but it will be interesting to watch these stodgy national organizations try to persuade young members of that usefulness.