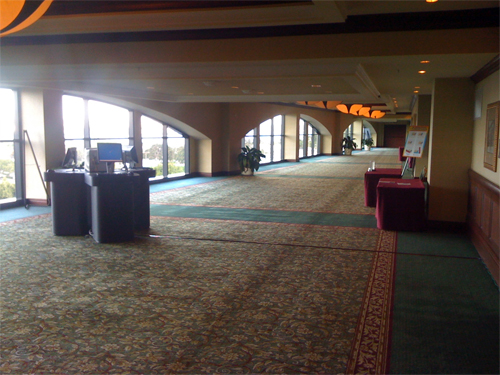 This so-called cyber cafe was the beginning and the end of free Internet access at NCSM 2010. It was like the fall of Saigon around there. Basically.

What Is A Rich Math Problem?

According to Kysh and Resek of San Francisco State University, a rich problem …

I’m not sure if there’s some selection bias working for me here but every session I’ve attended on problem solving has approached it very courageously and with profound respect for teachers and students. Like this:

Students need to experiment and fail productively. Teachers want to be helpful to their students so they run around protecting them from failure. But you learn by failing. Failing is a productive thing. Mathematicians need a big wastebasket. Test scores can improve by teaching less.

They discussed examples and counterexamples of rich problems as well as strategies for teaching them (none of which diverged much from the template laid out in yesterday’s awesome problem solving session) but the best question came up at the end and went unanswered:

“Where do you find rich problems?”

How Do You Teach Teachers To Anticipate Student Thinking?

If you can’t anticipate student thinking you end up helping students with comments like, “You might want to check on step two there.” Or, “Tell me how you went from step two to step three there.”

In order to provide nuanced feedback, it becomes really important to acquaint yourself with all kinds of routes (mistaken and correct) through a problem.

We were at thirteen tables. We were all given the same problem. We worked through it in different ways and then passed our answers around, examining another group’s work on our table like a coroner pokes at a dead body on a slab.

This was a useful exercise. 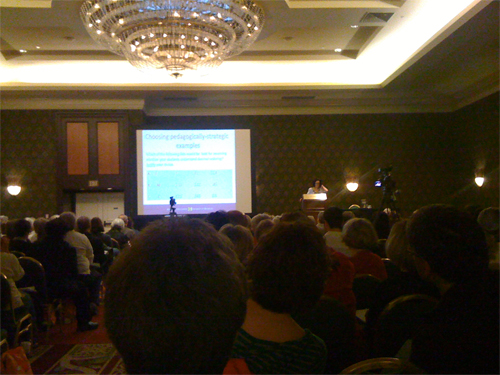 This was a monster presentation. Just incredible. I couldn’t stop tapping away. Looking back through my notes, I find it hard to believe she pushed through that much material with so much nuance.

It seems impossible to condense a presentation further that’s already so lean (a nice man with an expensive camera filmed the entire thing — I hope to find and relink that soon) but here’s a brief shot:

Math teaching is complicated work that requires a teacher to …

… become mathematically agile on her feet.

Can you quickly analyze and remediate a correct answer that came about from incorrect computation? All of these students have the right answer. 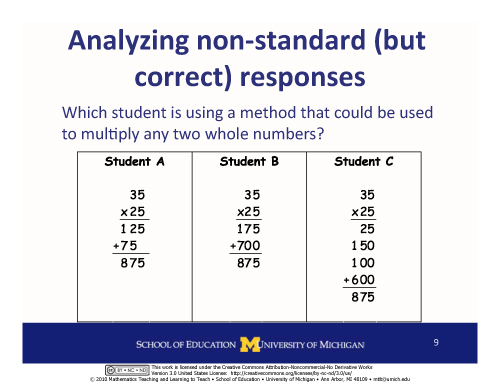 How do you nudge those students towards a generalizable method? 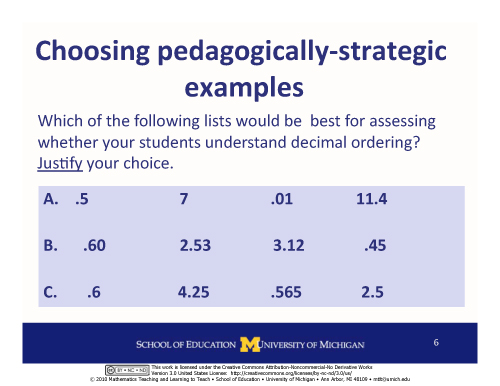 The answer is [c]. Does anyone want to take a swing at the rationale in the comments?

… develop sensibilities about mathematical language, including a realization that not everything in K8 education needs a definition and an awareness of the overlaps and conflicts between math language and everyday language.

If a student defines a rectangle as “a shape with four square corners that’s flat and closed all the way around,” is she wrong? Will that definition lead to undesirable complications later on in her learning?

If you ask a student to define a “polygon,” will you accept anything less formal than “a simple closed plane curve composed of finitely many straight line segments.” How much mathematical fidelity will you sacrifice in order to exploit your students’ everyday vocabulary.

I just took some criticism via email of my use of the term “steep” instead of “slope” in my TEDxNYED presentation:

I’d urge against using the word “steep” to describe slope. Steep is a physical characteristic, and “rise” is very different than “increase.”

Given the remedial populations I teach, it shouldn’t surprise you to learn that I tilt towards familiar language as a starting (though not an ending) point, though I feel the tension along that rope all the time.

… recognize how subtle alterations in the wording of a problem drastically alter the mathematical work required to solve it.

Along these lines, I’d like to recommend Kate Farb-Johnson’s analysis of math assessments that test students’ reading more than their math.

Here are DLB’s slides. Find the video of this talk.

NCTM 2010 â€”Â Day One   NCSM 2010 â€” Day Two
Unless otherwise noted, everything you and I post here is licensed
for reuse under Creative Commons Attribution 4.0 International.