How Do You Turn Something Interesting Into Something Challenging?

Nat Torkington writes the Four Short Links column for O’Reilly’s Radar, highlighting interesting articles around the web on a daily (or near-daily) basis. Recently, he’s pitched me a few links via e-mail under the heading “WCYDWT?” which, due to my fallen nature, I have taken as a challenge to my sacred honor.

Here’s one: the relative price of different liquids which illustrates the disturbing fact that HP printer ink is several orders of magnitude more expensive than crude oil. 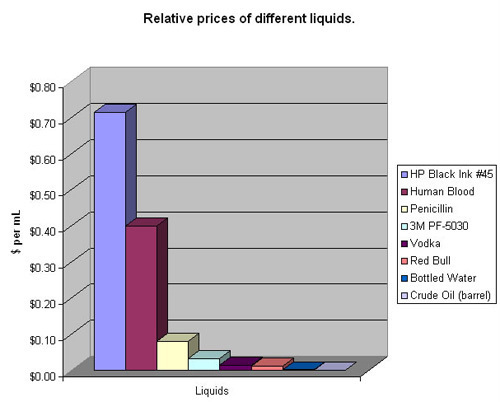 So I opened our first day back from winter break with a learning moment built around Nat’s link and then recorded video of the moment which you’ll find below. My apologies in advance for the pitiful production value. Initially, I was going to forward this only to Nat as some kind of retort but I found the experience so difficult, messy, and exhilarating, I had to debrief myself here. Notwithstanding the video quality, you’re welcome to pummel me for anything you see.

Synonymous with “What Can You Do With This?” is “How Do You Turn Something Interesting Into Something Challenging?” I have asked educators that question on this blog, in online classes, and in several conference presentations over several years. Here is – by far – the most common answer:

Which is a weak start. A certain kind of student inevitably dominates these pseudo-Socratic discussions and then invites another kind of student to disengage. But Nat has dealt us a strong hand. If we play those cards right, we can retain and empower a lot of those (mathematically and conversationally) reticent students.

1. Calm down with the math for a moment. Invite their intuition.

At one point in my career, I would have led this off by giving them all the data and asking them to compute the ratio of cost to volume. but my blue students are poorly-served by that approach. So many of them have been burned so badly by math that if I open the conversation with terms like “ratio” and “volume,” pushing numbers and structure right at them, I’ll lose the students I want to keep. Moreover, this confuses master with slave. We use math to make sense of the world around us more often than the reverse. 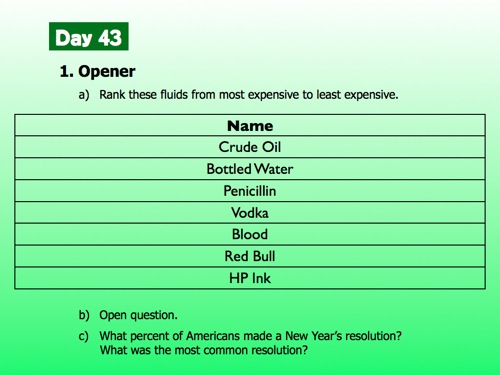 So I put seven liquids on the wall and asked them to rank them from most expensive to least. Simple speculation. Nothing more mathematical than that. Please imagine, here, how much more fun it is to walk around and talk about the question, “Which do you think is the most expensive?” rather than the lead balloon “Which has the highest ratio of cost to volume?”

Ask a student to come up and share her ranking with the class. Argue a bit. Entertain opposing opinions. Ask a student if he’d trade a can of Red Bull for a can of his own blood. Student investment at this point is very nearly 100%. It’s mine to lose. 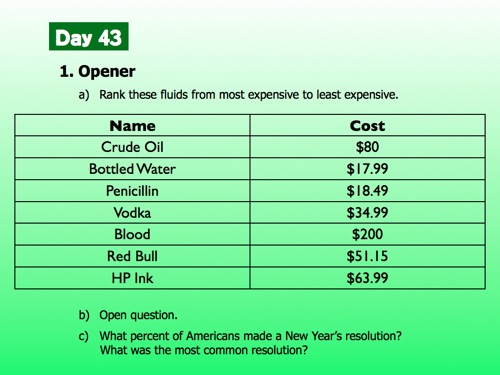 “Here’s the answer,” I told them, but students know at this point to triple-check me. Several went straight for Red Bull, which totes does not cost $51.15.

“So you’re saying that how much you get matters as much as how much it costs.” 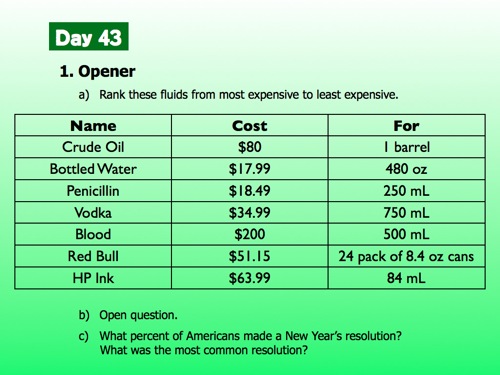 We used cell phones to text Google and ask for unit conversion. This always strikes my students as magical and suspicious. 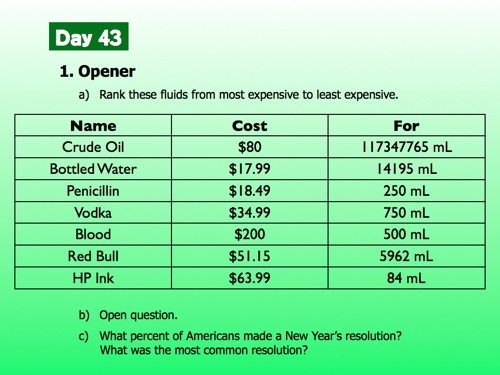 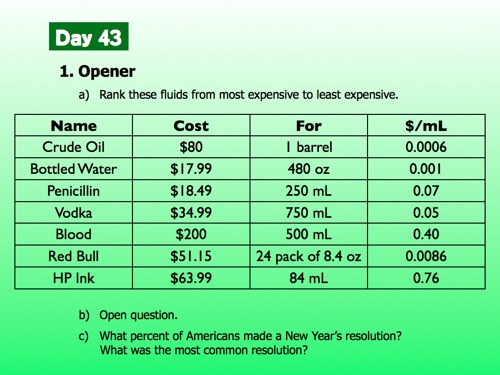 The rest (hopefully) writes itself, though, for the record, I kind of hate how explain-y I get in the last third of the video. 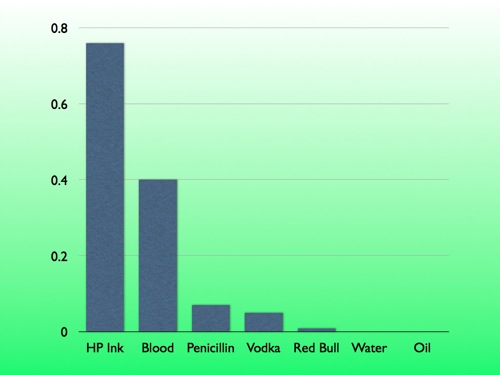 The Virtuous Cycle Specific To Our Line Of Work

The feeds in your reader then spiral upwards and out of your control. WCYDWT ideas begin to pile up faster than you can capture them. It’ll freak you out and you’ll wish you could turn it off for just a few hours while you’re watching TV but you realize this a rare ancillary benefit in an occasionally tortuous job and you accept it gratefully.

[BTW: Mr. K rightly points out that this problem is of a piece with the nickel thieves from a few years back.]

[BTW: You should read Burt’s commentary on the lack of real-world meaning of these statistics.]

This Blog Is Counterproductive   In Further Praise Of Rhett Allain
Unless otherwise noted, everything you and I post here is licensed
for reuse under Creative Commons Attribution 4.0 International.