Guilt Is The New Merit Pay

We’ve lost another good math teacher, that’s what’s wrong. [..] I know everybody wants to be the big cheese and be the big hero. But what we need is teachers, not more professors, advocates, rabble-rousers, or whatever.

Mathematically, what’s wrong with this schedule? I mean, it trips me up every time I look at it. 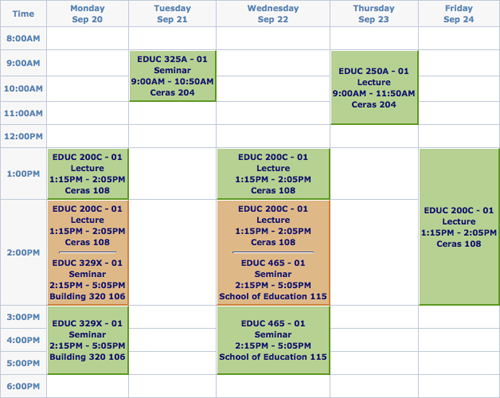 So in case you were wondering:

I like this one for its sheer density of wrongness. In less than twenty words we get three notions that would be ridiculous in a real context: That the narrator would have a favorite orange, that we have to solve a contrived word problem to find its weight, and, the punchline, once we solve it, that this “orange” weighs nine pounds. 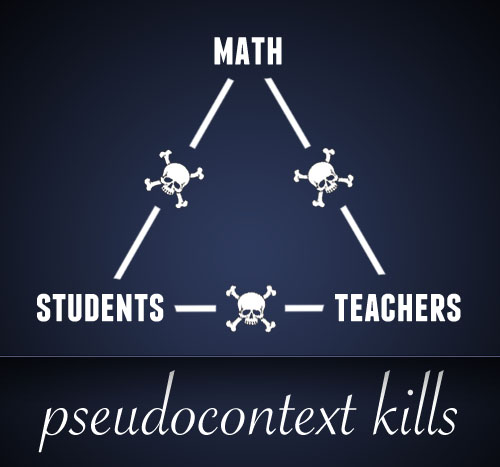 I’m in the middle of Jo Boaler’s What’s Math Got To Do With It? when she drops the term “pseudocontext.” It’s great:

Instead of giving students realistic situations that they could analyze, textbook authors began to fill books with make-believe contexts – contexts that students were meant to believe but for which they should not use any of their real-world knowledge. Students are frequently asked to work on questions involving, for example, the price of food and clothes, the distribution of pizza, the numbers of people who can fit into an elevator, and the speeds of trains as they rush toward each other, but they are not meant to use any of their actual knowledge of clothing prices, people, or trains. Indeed, if they do engage in the questions and use their real-world knowledge, they will fail. Students come to know this about math class. They know that they are entering a realm in which common sense and real-world knowledge are not needed.

We need to call pseudocontext out when we see it, call it out by name. If we invite pseudocontext in our classrooms without condition, it becomes harder and harder to tell the difference between the real and the unreal. It becomes easier to excuse all kinds of bizarre unreality because, well, I mean, this is math class and in math class it’s possible to know that “in January of the year 2000, I was one more than eleven times as old as my son William while in January of 2009, I was seven more than three times as old as him” and yet not know how old your own son is.

This site even admits:

Obviously, in “real life” you’d have walked up to my kid and and asked him how old he was …

Then don’t pretend this is real life, okay, because everyone loses here. Students and teachers are alienated from mathematics and from each other.

[BTW: To clarify, the fact that you can just ask the kid’s age doesn’t indicate pseudocontext here so much as the fact that there’s nothing inherent to age that would lead you to the equation “E = 11W + 1.”]