So the question I ask myself before I give any calculus lesson is: “Why on Earth would anyone actually go through the trouble of doing it this way?” There really is a rich set of useful problems that can only be solved using differential calculus, so why not present them (or, God forbid, let the kids think of them) to students and work your way out?

My rhetoric here is getting a bit lofty, and I hope my actual lessons don’t end up being a let down, but they sometimes are for me, too. It turns out that it’s hard to come up with real things for math to do when you’ve only been modeled the most sterile way of learning math.

I find this kind of exuberant, confident, loose-limbed classroom introspection pretty much irresistible. It’s rare you find an edublogger this prolific who also works full-time in a classroom.

Put your money in Shawn Cornally, Inc., while his stock price is low.

Dan, I’m totally with you on this line of thinking but only up until a point. I’d add a further layer to your line of questioning: who cares? Who cares how fast you can fill it up? Ultimately, the motivation to learn needs to be intrinsic from the student. Just making something more flashy (as much as I think technology can help here) isn’t enough. We need to also make it relevant.

Maybe someone can help me find some sense in Joe’s objection.

As a starting point for a rebuttal, WCYDWT has less to do with “flashy technology” than it does with a template for talking about math. Some technologies enable that conversation better than others. That’s all.

And then there’s this: “who cares?”

If we’re planning on paring math curriculum down to the material about which students instinctively care, Joe needs to prepare himself to trim Algebra 1 down to somewhere near the size of a Scientology tract, the stuff that explicitly involves video games and cell phones. On the upside, we’d finish the school year somewhere in October. On the downside, you’d lose the entirety of pure math.

A closing anecdote and then a wager. My career leads me to this prediction, upon which I’ll stake my credibility and whatever else you want:

Play the water tank video clip in front of a class of students of any age between 12- and 30-years-old. The video is best served cold. No music. No text. No introduction.

Your students will start to inventory their surroundings. They’ll identify the crucial elements of the scene. Again, you shouldn’t say anything.

Twenty seconds into watching the hose dribble water into the tank, ask “how long do you think this is gonna take?” Ask for guesses. Just guesses. Write them on the board next to the guessers’ names. Whenever anyone raises the maximum or lowers the minimum, point it out.

Then turn the clip off. Turn off the projector and proceed to whatever else you had planned for the period.

At least one student will ask what 90% of the class will be thinking:

BTW: a blogger took up my wager. The entire post is well-written classroom anecdote but here’s the relevant excerpt:

One day I introduced a lesson based on a challenge presented by Dan Meyer (The Wager from “Who Cares?”). I played about 20 seconds of a video clip created by Dan Meyer of a transparent tank filling up with water at the beginning of class. I asked each group of students to predict how long it would take to fill the tank. Their guesses ranged from ten minutes to a few hours. The fill/drain a water tank problem is a pretty easy, if unexciting, application of linear equations to a real-world situation. Yet, by allowing the students to actually see the tank and having them make a prediction, the plan was to engage the students in the process of discovering the answer. After the students made their predictions, I abandoned the water tank problem and moved on to something completely different. In each one of my classes, eventually a few of the students made a comment along the lines of “you never told us how long it took to fill the tank.” Sometimes the comment came only a few minutes after we had moved on. Other times, it came much later. More convincing evidence of the students’ level of engagement in the exercise came at the end of the lesson when I played the rest of the video. With their focus on the screen, you would have thought they were watching a summer blockbuster at the movie theater, not a tank filling with water in a classroom.

I used the engagement of the students to invest them in solving a problem that involved some critical thinking. When we revisited the problem, I avoided the temptation to hold the students’ hands through writing a linear equation to represent the situation. Instead, I simply asked them to come up with a justified answer to the question of how long it would take to fill up the tank. Some students’ answers included a rate of change and/or linear equation. Most of the answers didn’t. All of them experienced the struggle, including failure, that it takes to solve a real problem, and the first group was able to make a connection between the content covered earlier in the year and a problem they had not seen before. 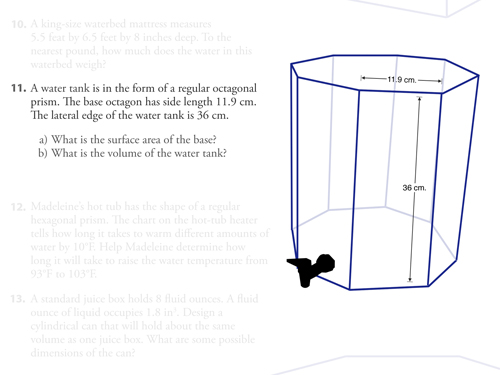 The same as worst except: 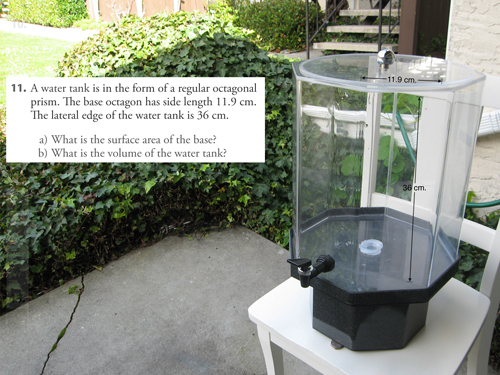 The same as bad except: 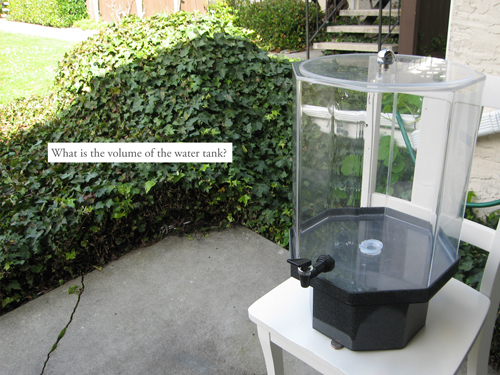 The same as good except:

The question: how long will it take to fill up the tank? 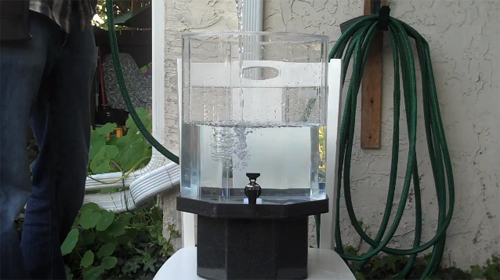 There’s some dynamite material in the comments of the previous post, particularly from Alex, Andrew, Frank Noschese, and Steve Peters.

For anyone interested in curriculum design, please consider: which of these is the better question to ask a class?

Your answers and their justifications are due in the comments. Use a #2 pencil.

BTW: My answer below.

What Can You Do With This: Water Tank

This one isn’t terribly ambiguous. As usual, I’ll welcome you to describe the kind of activity you’d build around this clip, including the kind of supplementary materials that would be useful.

But really, I’m only posting this as a preamble to the kind of rubric suggested by monika hardy several posts back. Assuming we’re after curriculum that provokes students to apply mathematical reasoning to the world around them, that teaches students to construct their own problems: