What You Can’t Do With This: NLOS Cannon Challenge

This is a classic game. It’s been around in various forms longer than I’ve been alive. Choose your velocity, choose your angle, cross your fingers, and fire. Discovery has simplified the game nicely, removing some noisy variables like wind speed, which you’ll find in other versions. 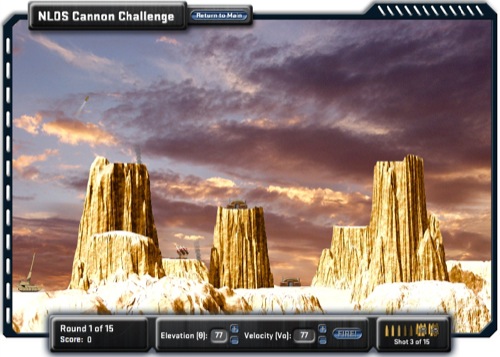 I first saw Discovery’s incarnation several weeks ago and have been on-and-off obsessed ever since by the question: what can I do with this? The point of this post is to throw up my hands and report: nearly nothing. I have no idea what the students do here.

I mean, it’s far from worthless. If a student can get past level ten, then she clearly has some understanding of angle and velocity and the dialog between the two. She might even ask herself some interesting questions, like, which angle gives you the longest range? But I won’t drag the laptop cart across school for those small potatoes, for that two-step lesson plan of 1) guess and 2) check.

Here is the most rigorous, reasonable question this game can ask, a question which it is fundamentally incapable of answering: can you develop a method for hitting any target in one shot? This is a question either a) Discovery didn’t think of or b) Discovery thought of but, for whatever reason, didn’t make accessible to students.

All of which is frustrating. The game uses mathematical notation for angle and initial velocity. It comes packaged with its own assessment system. This thing is so close to being useful.

Which makes it an interesting answer to Scott McLeod’s question, where are the Internet resources for your subject area? Because this game isn’t from some arcade site which I’m hopelessly trying to bang into a lesson plan. It’s from Discovery, which isn’t exactly apathetic to the needs of educators. Why didn’t the thing come with a lesson plan?

BTW: Just a little over a year later and Colleen King comes through for the team: Tactical Rescue Missions for Intergalactic Good. Great work.

Yes We Can, Etc.   Digital Time Travel
Unless otherwise noted, everything you and I post here is licensed
for reuse under Creative Commons Attribution 4.0 International.