Harvard’s Oliver Knill extracts clips from movies that evoke math. To whomever first tipped me to this site last year and for the dozen recommendations I have received since, thanks, but I have no idea what to do with it. There is value here, certainly, but rarely is it of the WCYDWT? variety, which has kids actually getting dirty with math. 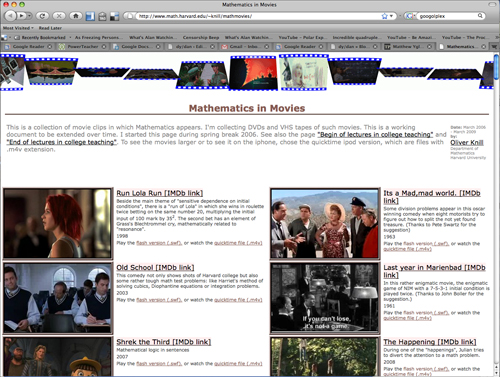 Basically, this is mathematical pornography, where handsome people in movies use the same math I’ve been telling you kids that people in the real world use all the time.

For example, check out the Straw Dogs clip in which a blackboard with some astrophysical equations appears! Or the time that Doc Brown uses the term “googolplex” in Back to the Future III! Even Matt Damon enjoys solving linear equations!

Like I said, there is value here, I’m sure, but I’m looking for fruit on higher branches. Because every single one of those clips begs the question:

What do the students do with it?

If you can’t build an interesting activity out of the a/v material, something to challenge and perplex your students over a sustained stretch, I have little use for it. The thesis of both this post and the last is that we have to make the really useful stuff ourselves.

The Latest Web 2.0 App For Education   What Won’t Work: FlickrCC
Unless otherwise noted, everything you and I post here is licensed
for reuse under Creative Commons Attribution 4.0 International.