What Can You Do With This? is the most fun I’ve had this school year. I could do week after week of times table review if my students and I were allowed just thirty minutes per week to sharpen our minds with mathematically rich multimedia.

Scanning Creative Commons-licensed photography databases for math media simply isn’t a scalable solution. These media must be unaffected. The student must lift the heavy weights. The student must decide for herself what is important about an image, audio sample, or video. Most photographers, meanwhile, are very interested in artistic expression, in affectation, in imposing their own point of view on a scene, rather than stripping the scene of their point of view entirely, which is essential for classroom work. So instead of something unaffected, and artistically value-neutral like this: 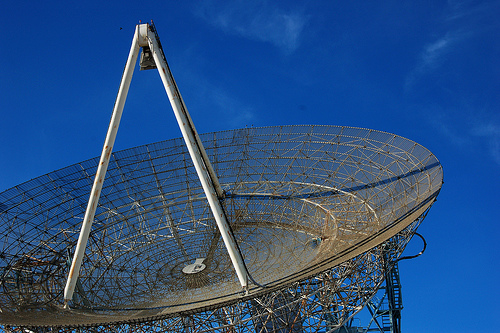 … with the camera positioned at an artistically interesting but academically unhelpful angle. You can’t model a parabola onto this. You can’t model a circle onto this. The photographer was (naturally) unconcerned with measuring the scene, which rules out basic photogrammetry. It begs the question, “who shot this?” rather than an interesting question about the parabola itself.

This is a generalization, true, but a useful one. You can’t find the really effective WCYDWT? media. You can derive surface-scratchers like “what shapes do you see here?” from Creative Commons-licensed Flickr media but if you’re looking to propel a meaningful discussion or a rigorous activity, you have to make it yourself.

What Won’t Work: Harvard’s Movie Math   Will The Ball Hit The Can?
Unless otherwise noted, everything you and I post here is licensed
for reuse under Creative Commons Attribution 4.0 International.