The Woman Who Didn’t Swim Across The Atlantic

This is somewhere in the neighborhood of What Can You Do With This? except I have no idea what to do with it.

Reaching a beach in Trinidad, [Jennifer Figge] became the first woman on record to swim across the Atlantic Ocean – a dream she’d had since the early 1960s, when a stormy trans-Atlantic flight got her thinking she could don a life vest and swim the rest of the way if needed. – Associated Press, 2009 February 8

Figge swam 2,100 miles from Cape Verde to Trinidad in 25 days, sleeping nights on a catamaran that drifted alongside her.

Sort of. Outside Magazine has printed a retraction.

Here is a hazy look at how I plan this sort of activity. Please step in at any point to save me from myself.

Again, we lower the mathematical framework onto this situation slowly, only as the kids give me the nod to bring it closer, only as they invest themselves into the problem in small ways like guessing the route or the duration of the trip. Bonus exercise: imagine how efficiently your textbook publisher would crush the life out of this problem. 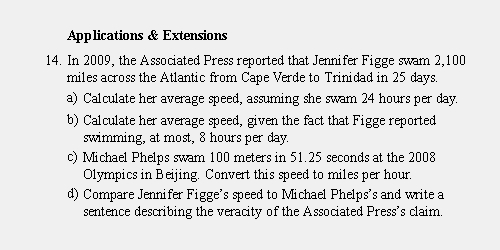 I’m running out of ways to illustrate my frustration with curriculum design’s status quo. Time to get the jihad going, I guess.

A Framework For Using Digital Media In Math Instruction   What Can You Do With This: Becky Blessing
Unless otherwise noted, everything you and I post here is licensed
for reuse under Creative Commons Attribution 4.0 International.