Television, The War In Iraq, And David Milch 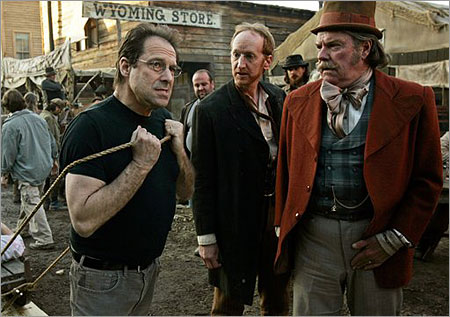 I revisit David Milch’s interview at MIT on a yearly basis. Milch created Deadwood, the notoriously profane Western, and John From Cincinnati, which none of us really got, right?

In spite of his wobbly track record, I’ll watch anything Milch makes. His aesthetic is perfectly defined, which isn’t to say it’s perfect, just that he knows what he loves, why he loves it, what he wants to create, and why he wants to create it. His work mesmerizes me and this interview, which glances at his history with addiction, his spirituality, his tortured family history, America’s relationship to television, and the war in Iraq, rivets me.

I’m not sure which of my regulars might be into this. Dina, maybe, who oughtta dig his condemnation of “the shaping of human experience in distorted forms.” Tom, maybe, who has seen Deadwood, at least. Other than that, I post this so I can revisit the best excerpts whenever I experience the need. I have linked each transcript to its audio because Milch’s gravely delivery is pretty priceless.

If you read nothing else, read the first excerpt, which has extraordinary bearing on how we teach and how we use media in our classrooms to provoke critical thought.

On the war in Iraq and television’s deforming influence on our national consciousness [audio]:

I think that the war in Iraq has ever so much more to do with the media’s abdication of its moral responsibility than with the deficiencies of our President. I think that the media have infantilized the expectations of the audience because of the lack of some sort of transcendent informing vision. I believe that the surrogate existence that is provided by television has come to supplant the genuine emotional life of the populace. I believe, therefore, that the reason that I have chosen not to do any more contemporary drama is because the assault on the collective sensibility of 9/11 was such as to give the audience so much fear that the only way that they could be placated was with a television series – a miniseries – which would be finished in three weeks and which would tell them that “you do not have to fear danger here because we are going to take the war over there.” And the rationale for that war had nothing to do with weapons of mass destruction and everything to do with the habituation of the viewing public to the shaping of human experience in distorted forms for which the media is responsibility. So that the first three weeks of the Iraq miniseries was received with enormous public approval because it was the series we wanted to see and it was the triumph of American weaponry and it had a beginning, a middle, and an end. And the disaffection with the Iraq war has nothing to do with what is going on with the Iraqi people and everything to do with the fact that that series is over. We don’t want to see that series anymore. We wanted to be narcotized in our reaction to the assault on the World Trade Center. We got what we were looking for. Don’t be bothering us anymore with the goddamn roadside bombs. Bring the boys home. Well the boys were never coming home after three weeks. War isn’t like that. It was a war undertaken for the wrong reasons and responded to for reasons that the public has absolutely no conception about and therefore the dialogue that’s going on about President Bush has nothing to do with President Bush and everything to do with the fact that he is the failed central character in an infantile drama which was being staged to narcotize the American public and, no matter who was in office, the so-called intelligentsia would be trivializing him and criticizing him now.

I am saying there is a different drama which is enacting itself in our country right now and it has to do with a failure to acknowledge the necessary moral and imaginative predicate that has become an entirely virtual existence, which is, you know, people spend more than half their waking hours watching television. Just think about that for a second. That has to shape the neural pathways. It creates an impatience, for example, with irresolution. And I’m doing what I can to tell stories which engage those issues in ways which can engage the imagination so that people don’t feel threatened by it.

[Sippowitz] is a character who had a lot of traits that my dad had and I think that one of the opportunities of my life has been the chance to discover love for complicated personalities, such as that, so he’s a guy that I have a lot of affection for.

On his relationship with the past [audio]:

Let me hurry to say that I am a very happy and grateful person and I was saying in a class a little while ago that the future is constantly in the process of interpreting the meaning of the past.

On the role of a doctor [audio]:

I think that the fundamental responsibility of medical practitioner is not curative, it’s pastoral. “I will walk with you into whatever darkness may come.”

When I started to write out there I won a lot of prizes and one of which was the Humanitas Prize, which is given by the Catholic church for the most uplifting whatever it is. Fifteen grand. Tax free. And I kept winning this thing and at that point I was a heroin addict, very bitter, so I would make it my business whenever I would come back to get the next award to tell the priest – uh Father, I can’t remember his name – I said, “I’m sure it will please you to know that I took that money and bought a racehorse with it,” which is what the church probably would have wanted me to do, trying to scandalize him. And I hated this guy. I just hated him. And I could never figure out why I hated him so much. He would look at you and he’d smile as though he knew something about you that you didn’t know about yourself. I hate people like that. Anyway, years go by and I won a few more times and finally I got sober. And I had the opportunity, finally, when I won this award again, I said, “you know, I’ve never liked Father So-and-So. I don’t like the way he looks. I don’t like his buckteeth.” And he was sitting right next to me. “And the thing I really didn’t like was that he always had this smile when I would try to offend him like he knew something about me I didn’t know about myself. And I thank God that I have lived long enough to have come to understand that the shadow in which I felt that all of my characters had to move and live, in fact, was cast by God’s sheltering hand. And that’s what the father knew about me that I didn’t know about myself.

On the past again and, particularly, his mentally ill, suicidal father [audio]:

I would urge you to understand that in the deepest part of my heart I regard those experiences with joy and gratitude and, certainly, love for my dad.

On the rhythms of speech and our connection to other people [audio]:

I feel that the metrics of speech are important and representative even in those of us who feel (mistakenly, as I believe) that we are separate from each other as individuals, it seems to me that the way God says, “I too have a hand here” is in the rhythms and metrics of speech so that even unbeknownst to themselves they honor a divine presence in certain elocutions of Deadwood.

On his creative process [audio]:

On his creative process [audio]:

I am sort of a waystation for all kinds of influences that come in and out and, thankfully, Vicodin has been eliminated from that.

On creative liberties taken in the name of fiction [audio]:

The truths of reportage or history depend on – to the extent that they depend on anything – a correspondence to an externally verifiable reality and the truths of storytelling are the truths of an internal emotional coherence. And that can quickly become the refuge of charlatans but I guess I’d have to plead guilty to that possibility.

Impatience With Irresolution, pt 1: Part Of The Problem   My #1 and #2 Pick
Unless otherwise noted, everything you and I post here is licensed
for reuse under Creative Commons Attribution 4.0 International.