Put THAT On The Fridge

There aren’t a lot of firsts left in your life when you’re twenty-seven so imagine my exhilaration last week at Google when I encountered an annoying technical problem and rather than grind the solution out over several hours of pointing, clicking, and transcribing, for the first time ever, I wrote twenty lines of code that solved the problem in several minutes.

I created something from nothing. And that something did something else, which is such a weird, superhuman feeling. I’ve got to chase this. I’m on a very dark path right now. 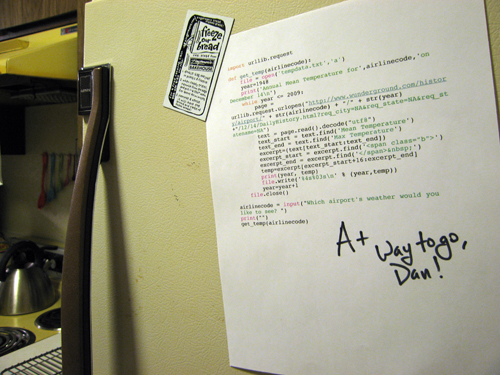 At the same time, I’m going to resist to the bitter end the urge to write up some grand prescription for education-writ-large based on something as flimsy as my own personally satisfying learning experience. There’s way too much of that in the edublogosphere without my own contribution.

Professional Conference Video With Semi-Professional Equipment   Asilomar #5: What Can We Do With This?
Unless otherwise noted, everything you and I post here is licensed
for reuse under Creative Commons Attribution 4.0 International.