[link to his report] 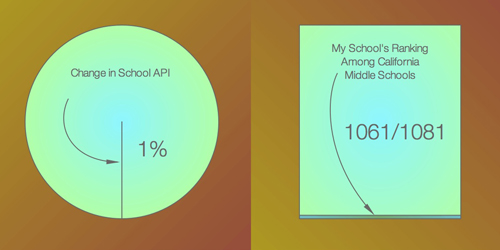 An appreciation by Sam Shah:

I ranked Mr. K at the absolute top of my list because his slides, simple and minimalist, speak volumes. With just four pieces of data, Mr. K has painted us a picture of a school flailing at the bottom of the rungs. Students are underperforming, the school’s academic perfomance is not improving, and the school is undergoing administrative shifts too. Follow along with me here, for a short minute, because I think there’s something moral about these slides. They aren’t just statistics, but carefully chosen statistics. Mr. K could have written about the number of teachers in his school, or the number of students he teachers, or whatever. Numbers, as a math teacher, abound everywhere. But instead, he gives us this: somewhere underneath these slides is an imperative that things are not okay the way they stand, that things need to change.

Design-wise, Mr. K hit the mark. Using miniscule areas of simple geometric figures highlights, without being obnoxiously in-your-face, where his school and his students lie relative to other schools in California. The fact is simply that using this same technique four times over is synergistic — but only because four such simple and powerful statistics exist. Take a moment and look at each slide individually. They each say something about the place Mr. K spends a preponderance of his time. But as I said, together, they speak as one. And loudly.