Asilomar #5: What Can We Do With This? 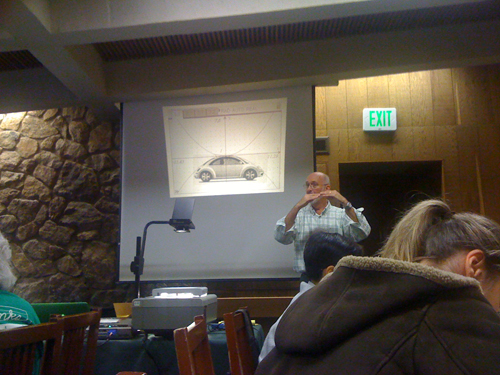 Lights, Camera, Action! Fun And Success For All In Algebra

“Why would we want to teach with digital images?” he asked and then answered, “Because it’s better to watch it than read about it.” where “it” referred to any generic textbook problem.

I had no disagreement insofar as we keep text on the table as an option for those who do find it better to read about it than watch it. Math education, however, is not suffering from a surplus of visual representations.

I’m naturally inclined to this kind of discussion. He pointed at an image on the screen and asked, “What can we do with this?” which is obv. one of my favorite questions to pose, discuss, or answer. Bellman and I answer that question differently, however. 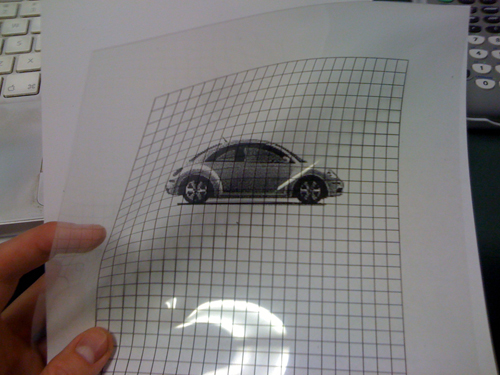 We could position the car wherever we wanted. Some positioned it upright. Others upside-down. Some defined the origin of their coordinate system at the top of the car. Others at the bottom. We all derived our equations.

Then he put a transparent Bug on top of a TI ViewScreen panel connected to a TI-84 Plus. He put the Bug in different positions and we had to modify our parabolic equation each time to match it, which was an interesting exercise in transformations.

Then we reworked the same exercise with an advertisement ripped from a magazine that featured lines, parabolas, and sinusoids. There were TI-Navigators on every table connected to hubs which were connected to some Windows software that would graph the equations we submitted after we logged in. 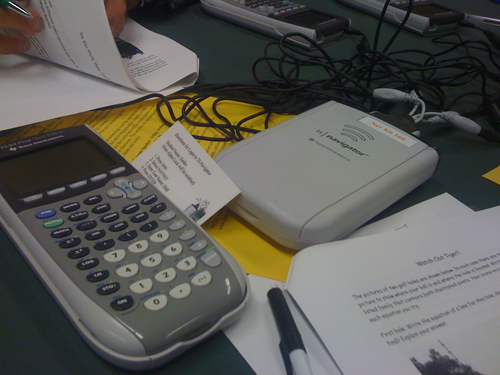 I graphed y = 4, which traced a horizontal line across a rooftop, and looked smugly at my tablemates.

Bellman then put up a picture of a golf course. He draw a ball next to the ninth hole and asked us to determine the equation of the line that went through those two points. He challenged us to find a quadratic model that fit to those two points. He mentioned that we could even ask our students for an exponential model.

And this is where my purpose splits from his on using digital media in the classroom:

Neither that line, that quadratic model, nor that exponential model have anything whatsoever to do with golf. If we’re going to use an image of a golf course we need to ask a question that clarifies or has even a glancing connection to golf itself.

By setting the background of a coordinate plane to an image of a golf course, we may engage a few more students than if we used a plain plane but I think we’ll also lose a few students on the other end who recognize the arbitrary, artificial nature of the setup. (ie. “Why not a picture of a baseball diamond?”) I worry that if we use digital media in our classrooms like this, we’ll define mathematics even more as an abstract thing rather than as a tool for explaining our own lives.

Bellman then brought up a video of a basketball player shooting a jump shot. We used Logger Pro to pull down some coordinates from the first half of the ball’s arc. Then we answered the question, “will he make the basket?” which is exactly the approach I’d like to see to digital media in the math classroom.

Some PowerPoint. A lot of modeling.

Transparencies and paper to push around and play with.

Put THAT On The Fridge   Asilomar #4: Be Less Helpful
Unless otherwise noted, everything you and I post here is licensed
for reuse under Creative Commons Attribution 4.0 International.