Asilomar #2: What Do We Do With The Seniors? 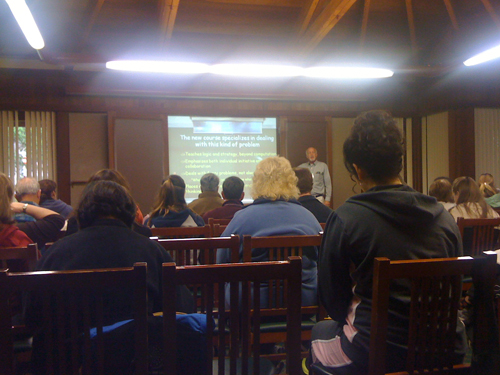 What Do We Do With The Seniors?

Loew and his colleagues wanted more options for students who finished Precalculus during their third year of high school (or earlier) but who weren’t going on to a STEM major and didn’t want to take Calculus. They came up with two.

College prep. Approved by the University of California for a-g credit.

One semester of “Calculus Lite,” heavy on application, light on theory, including:

One semester of “other math topics,” including:

Approved for elective credit. These are techniques for solving problems that aren’t neatly defined, for answering the question “what do you do when you don’t know what to do?” The course emphasizes both individual initiative and group collaboration, rewarding creativity and divergent thinking.

I applaud this kind of curriculum design but it seems a shame to me that students who aren’t already tolerant of ambiguity or already patient in their problem solving “may need to be filtered out” of a class designed to teach tolerance of ambiguity and patience in problem solving especially since those seniors have likely been indoctrinated with those bad habits by eleven years in the very same school system.

PowerPoint printouts. An interesting tactic here: he withheld the handouts until the very end and passed them out only in exchange for a completed session review slip. Seems to me to miss the point of handouts as another space to interact with ideas, but whatev.

Asilomar #3: How To Teach Geometry   Asilomar #1: What Do We Do With Algebra II
Unless otherwise noted, everything you and I post here is licensed
for reuse under Creative Commons Attribution 4.0 International.